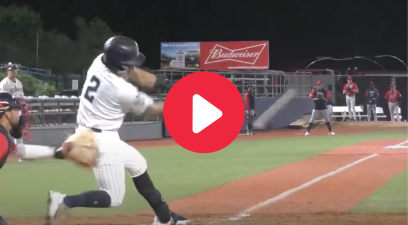 The Los Angeles Angels are in absolute freefall.

Their legendary manager Joe Maddon has been relieved of his duties.

Their star outfielder went ice cold until an injury took him out of a game.

Not even using Nickelback as their walk-up songs, as reported by ESPN’s Alden González, can shake them out of this losing streak they’ve found themselves in.

Losing a franchise-record 14 games in a row is insane, but the 2022 Los Angeles Angels have accomplished that less than incredible feat. And to make this situation even more unbelievable, it was caused by fantasy football.

The Los Angeles Angels’ Skid Started With a Slap

Tommy Pham and Joc Pederson made deadlines two weeks ago when Pham confronted Pederson during pregame warmups ahead of a Cincinnati Reds/San Francisco Giants matchup. A video of the incident shows Pham approach Pederson, say a few things and then haul off and smack him in the head. MLB stepped in and handed down a three-game suspension for Pham, but the story was out there. Pham had Fantasy Football beef with Pederson, and Superstar Mike Trout could’ve prevented all of it.

The incident spurred from a disagreement over how injured reserve spots were used in the trio’s fantasy football league. “We had rules to the IR,” Pham said to ESPN when he returned from his suspension. “I know the ESPN app rules. We had our own individual rules.” Taking things further, Pham put Trout in his crosshairs, while also sharing a tiny amount of blame.

“Trout did a terrible job, man,” Pham said through a laugh, per the Cincinnati Enquirer. “Trout is the worst commissioner in fantasy sports because he allowed a lot of (stuff) to go on, and he could’ve solved it all. I don’t want to be the [expletive] commissioner; I’ve got other (stuff) to do. (Trout) didn’t want to do it. We put it on him, so it’s kind of our fault too because we made him commissioner.”

Related: Mike Trout vs. Rob Manfred: Why Baseball’s Superstar is Right to Slam the Commissioner

After the suspension and after the outing of Trout as a problematic Fantasy Commish, the story seemed to end there. We’ve all been guilty of having an irrational response to a fantasy sports commissioner, so who are we to judge Tommy Pham? The one player who bore the brunt of the pain was Trout, because his pain was merely just beginning.

After Pham outed Trout as a bad commish, things went downhill for the Angels superstar. Over the next nine games, Trout’s bat when absolutely silent going 0-for-26 before finally getting a hit against the Red Sox on June 6th. In the following game, Trout would continue his hitting streak, knocking two hits a single and a double. But as the Millville, New Jersey, native hit first base and turned towards second, he felt his left groin tighten up and would come out of the game.

“Coming out of the box, I didn’t feel it and then I felt like a little cramp,” Trout told the media after the game. “Then I got to second base and a little achy and tried to be smart about it. I’ll see how I feel tomorrow. At least it isn’t nothing crazy.” While Trout’s left groin injury wasn’t anything crazy, the result of the Angels game that night was just that. The Angels had then lost 13 games in a row, as things continued to get worse for Los Angeles.

It should also be mentioned that the man who was responsible for taking Trout out of the game wasn’t the Angels’ usual skipper, Joe Maddon. In fact, this was the first game managed by Angels’ interim manager Phil Nevin, because Maddon had been fired earlier that day. Maddon, who famously led the Tampa Bay  Rays to a World Series appearance in 2008 and win the World Series with the Chicago Cubs in 2016, had been with the Angels since 2020. Maddon’s tenure in Anaheim will surely be scrutinized over the next few months, as the blame for his failure to get the Angels to the postseason is examined, but his dismissal feels reactionary.

Perry Minasian, the Angels’ general manager, called Angels owner Arte Moreno and got his blessing to fire Maddon. Minasian spoke to the media about the difficulty of making such a hard decision in the midst of a slump, saying he was “disappointed it’s come to this. I really like the man. It’s somebody I’m gonna talk to the rest of my life. Just the conversations daily. Who he is, what he’s about. You guys were around him — the energy he brings, how consistent he is on a daily basis. It’s tough. It’s tough. But you gotta be able to take emotion out of things and make decisions. I’ve taken the emotion out of it and taken a step back. Looking at where I’m at, as tough of a decision as it is, I felt like it was the right thing to do.”

After relieving Maddon of his duties after losing 12 straight games, the Angels began a new era with the same story: two more losses. The exact opposite of what happened to the Philadelphia Phillies after they fired manager Joe Girardi. Tough week to be a manager named Joe.

Beyond Trout’s problems, Shohei Ohtani’s loud bat has gone silent. The Japanese two-way, fireballer and slugger has yet to hit a home run in June, and in the last 15 games has hit a measly .184. If the Angels can be sunk by two players going into slumps, perhaps the issue was never Maddon in the first place. Perhaps it was roster construction by the front office.

No Signs of Let Up for the Angels

In their last three games against the Boston Red Sox, the Angels have lost by just one run in each game, leaving fans at Angel Stadium frustrated and upset. The Halos have one more chance to take down Boston, but after that, the chances for a win look slimmer and slimmer.

In the next week, the Angels will face the New York Mets and the Los Angeles Dodgers, the two best teams in the National League. So if the Angels are looking for a bad team to beat up on in order to switch up their luck, they may need to start looking for some other managerial options. When they finally face the Mariners after the Dodgers and Mets, will Nevin still be around? If Maddon didn’t last 12 straight losses, what does Nevin’s leash look like?

And to think, all of this came from one slap and a fraught fantasy football season with Mike Trout at the helm. Although, perhaps that’s the secret to breaking this losing streak.

Mike Trout needs to resign as Fantasy Football Commissioner. Either that or the Angels may need to do some soul-searching and ask what else they may have done to anger the Baseball Gods. Maybe they need to find a worse source for their walk-up music than Nickelback songs?

Nah, there’s nothing worse than that.