The 2020 Major League Baseball season is here, and it's (hopefully) here to stay barring any coronavirus pandemic cancellations. However, this 60-game MLB season looks completely different than what baseball fans are accustomed to.

Spitting, high-fiving and brawls are banned. The designated hitter was added to the National League. Extra innings begin with a runner on second. Crowd noise is being pumped into stadiums to simulate the effects of games. Even cardboard freaking cutouts have been placed inside Major League stadiums across the United States.

These fake fans have been a wondrous source of comedy for viewers at home so far. Teams have gotten creative deciding who deserves a spot behind home plate. For example, fake Steve Bartman has attended probably his first game since 2003. A Weekend at Bernie's cutout was spotted in Kansas City. We've even seen cutouts of dogs get drilled by home runs at Citi Field.

Like the NBA's virtual fan idea, the MLB's cardboard cutout fans are wacky and amazing. Not every team has gotten in on the fun and given fans a way to attend games, but a good deal of them have. It's also surprisingly easy to make sure your cardboard cutout finds its way to the seats for the rest of the 60-game season and the playoffs. 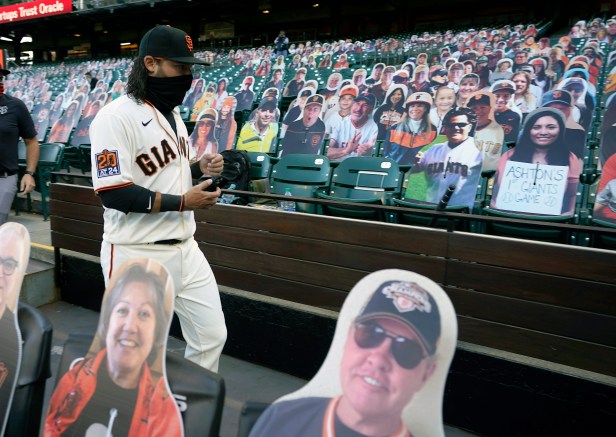 There are caveats, however. Like most teams, the New York Mets are telling cutout hopefuls their pictures can't include any advertisements, social media handles, offensive or negative references to MLB teams or any type of political statements.

Most teams are limiting purchases to one cutout per person and one person per photo, but the Atlanta Braves are making exceptions "if you're holding a cute baby." One White Sox fan said screw it and bought 100.

There's no rule saying you can't become a cutout in every stadium, either. Just be ready to shell out some serious dough and wear attire of other teams. You might even end up seeing yourself on ESPN's Sunday Night Baseball.

Here's a full list of how much each team is charging fans for cardboard cutouts, and how you can place your fake self in a front row seat at the ballpark during MLB games all season:

Arizona Diamondbacks: No cutouts of fans, but they have cutouts of medical professionals wearing masks at home games.

Boston Red Sox: $500. Cutouts go above the Green Monster. If a home run hits a fan's cutout, they'll win prizes like an autographed ball, two Green Monster tickets for the 2021 season and a Red Sox jersey with their name on it.

Chicago White Sox: $49 . Net proceeds benefit White Sox charities. The team offered 1,500 spots and they sold like hotcakes, probably because one guy bought 100 of them and took up an entire section of seating.

Cleveland Indians: $100. Fans can purchase up to four cutouts per transaction. They'll be placed from August 21 to the end of the season.

Houston Astros: $100. No selfies. No trash cans, either. You may even end up next George H.W. Bush and Barbara Bush.

I know they are just cutouts, but it's good to see George and Barbara at an Astros game. pic.twitter.com/suF1KzociO

Los Angeles Angels: No cardboard cutouts. The fake fans must be sad they can't watch Mike Trout do Mike Trout things in the outfield.

Los Angeles Dodgers: $149. That's the cheapest you can get at Dodger Stadium, and it's the same price if you want your dog or cat to have its own cutout. The Dodgers are charging $299 for home run seats, field box seats and dugout spots.

Here?s a look at the @Dodgers ?Pups at the Park? section, which is filled with cardboard cutouts of pets. The specific section of Dodger Stadium is sponsored by Lucy Pet Foods. pic.twitter.com/tjF0QxUN4Z

Miami Marlins: No cardboard cutouts. They've put cardboard versions of their players out with COVID-19 in the stands, though.

Milwaukee Brewers: $50. Can be human or furry friends. Plus, they have monkey cutouts.

The cat?s out the bag.

Introducing the ?Pets in the Park? cutout section of Miller Park with @WiscHumane.

Each cutout costs $50 with a portion of the proceeds benefiting Brewers Community Foundation (BCF).

?New York Mets: $86. Net proceeds will be donated to the Mets Foundation.

Oakland Athletics: $89, $49 for season ticket holders. They accept pet photos, too. A's are offering two free tickets to their first exhibition game in the Coliseum next season with the purchase of a cutout.

San Diego Padres: Cardboard cutouts not for sale. They are placing cutouts of players' family members and select fans in the seats, though. They'll also rotate cutouts depending on different themes.

San Francisco Giants: $99. You can even select to sit close to your favorite celebrity cutout, which is a star-studded list that includes Barry Bonds, Guy Fieri, Spiderman and San Francisco 49ers players George Kittle and Jimmy Garoppolo.

The closest I can get to @JimmyG_10 talking to me in the offseason ... @E40 knows what?s good tho! Good luck tonight @SFGiants ??? pic.twitter.com/6Xs5kQ5ONv

Seattle Mariners: $30. If your cardboard cutout "catches" a foul ball or home run ball, the team will mail you the ball.

There are now 5200 DoppleRanger fan cutouts at @GlobeLifeField that extend to the outfield. $50 each for those interested, proceeds benefit the Texas Rangers Foundation. @NBCDFW https://t.co/j1osWy81YJ pic.twitter.com/d7MLBlx5BP

Toronto Blue Jays: $60. Babies and pets are encouraged. Cutouts will be placed randomly in the Blue Jays' minor league stadium in Buffalo.

Washington Nationals: No fan cutouts, but it looks like they have players' family members out in left field.