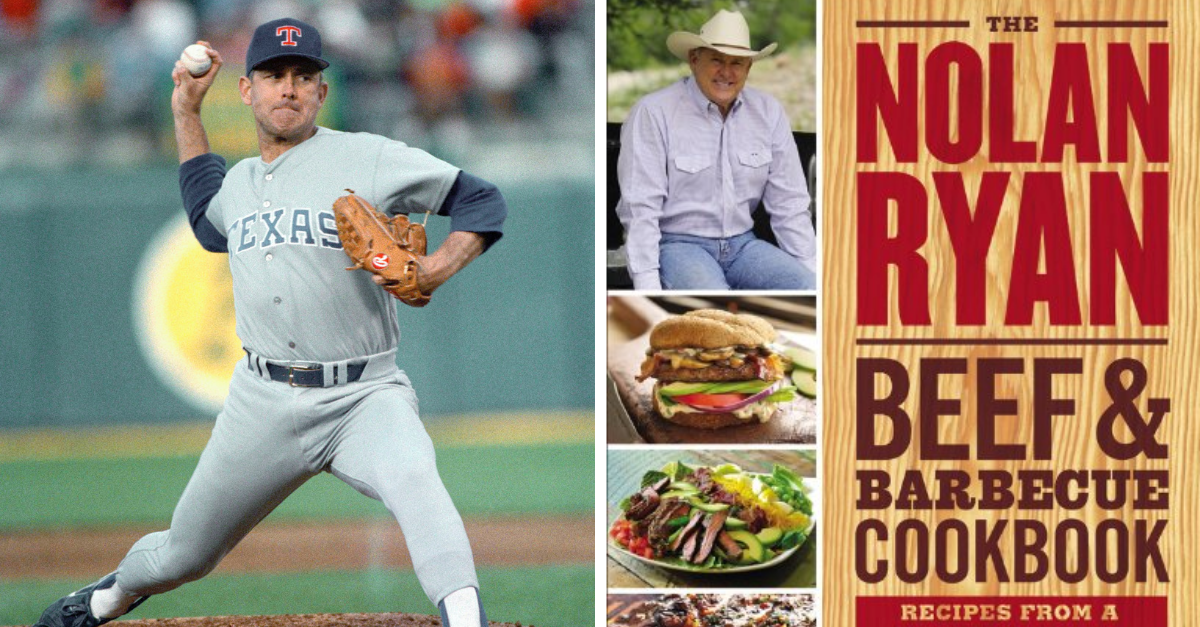 Besides some guy named Cy Young, Nolan Ryan is the greatest pitcher in baseball history. In a Major League Baseball career that spanned four decades from his debut in 1966 to his final game in 1993, Ryan set the MLB record with 5,714 career strikeouts, 839 more than second place on that list, bird-exploding lefty Randy Johnson. His number is retired by the Houston Astros, Los Angeles Angels and Texas Rangers, and he was inducted as a first-ballot Hall of Famer in 1999.

These days, the 72-year-old icon remains a passionate lover of flame-grilled, all-natural beef like every homegrown Texan should be.

In an interview with Fort Worth Magazine, Ryan explained why this book perfectly aligned with customers of his branded beef company, Nolan Ryan’s All-Natural Beef:

“The purpose of the cookbook, and one I think we accomplished, is there?s a lot of simple recipes in there that don?t take a lot of time and that you can go to your local supermarket and find all the ingredients that you need… With the lifestyles of people nowadays, I think that?s what they?re looking for. It?s not strictly a grilling cookbook. You can prepare the dishes in the kitchen.”

Working with chef Cristobal Vazquez, this 75-recipe book features everything from perfectly-done T-bone and rib-eye steaks, barbecue ribs, Sunday roasts and savory side dishes that any home cook can pull off with ease. There are even several of Ryan’s favorite desserts, including Ruth Ryan’s Special Occasion Carrot Cake.

?Ruth?s carrot cake is the best I?ve ever eaten,? Ryan says of his wife and high school sweetheart. ?And she does a green bean casserole I like that?s in the cookbook.

Amazon user Elizabeth H. Cottrell says, “I read a lot of cookbooks, and there are some wonderful ones out there, but if you like to cook on the grill, this is a delight, especially if you’re a baseball fan and have admired Nolan Ryan for his athletic ability.”

Today, the MLB’s all-time strikeout leader lives in Georgetown, Texas. When he’s not reminiscing on his days throwing baseballs over 100 mph and winning the 1969 World Series with the “Miracle Mets,” cattle rancher Nolan Ryan spreads his family recipes and love of the food of the Southwest to help recreate the “Tex-Mex standards of his childhood.”

This book, published by Little, Brown and Company, offers a fresh take on the American tradition of cooking Texas beef to perfection and hitting you with enough BBQ recipes to last all year.

It was a remarkable career for legendary pitcher Nolan Ryan, but his cookbook (here comes a perfectly-timed baseball pun!) is an absolute home run.