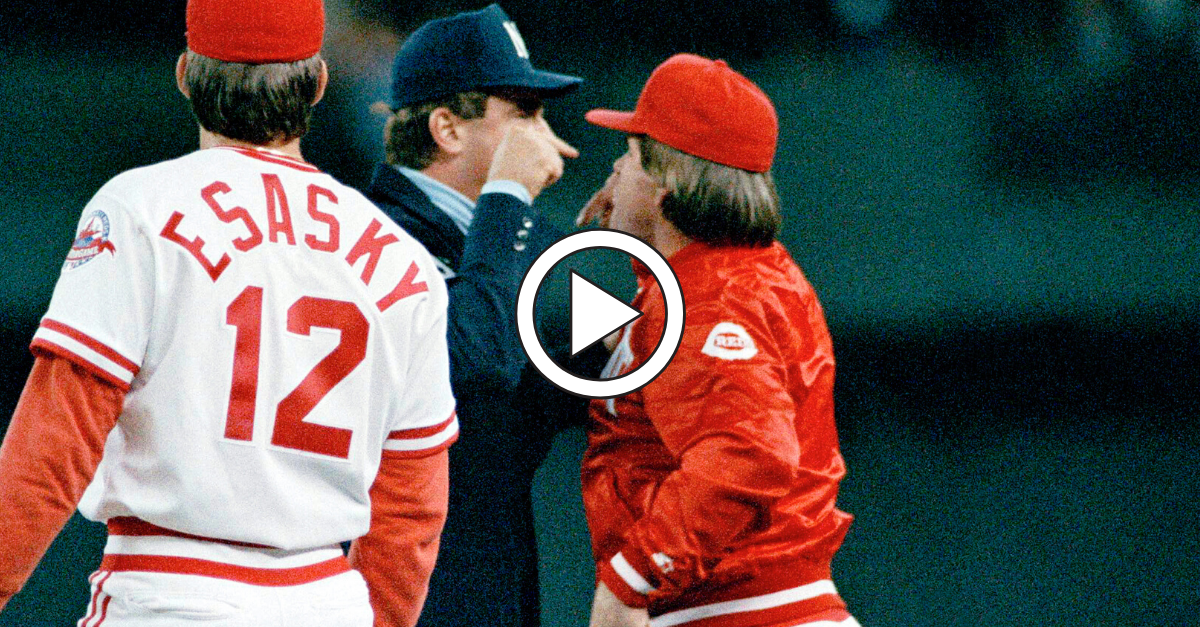 Say what you want about Pete Rose, whether or not he deserves reinstatement and belongs in the Baseball Hall of Fame, but nobody can argue his passion for the game. Time and time again, as a player and manager, ?Charlie Hustle? gave it his all and delivered a lifetime filled of memories. Not all of them are positive, of course.

Back on April 30, 1988, Rose lost his cool in a big-time way after a delayed call in the ninth inning of a tied game. It made him go crazy, to put it mildly, and he eventually shoved Major League Baseball umpire Dave Pallone.

So much happened in the minutes, hours, days, weeks, and months after the infamous altercation, and it?s one nobody will likely ever forget.

The game itself was a National League showdown between the Cincinnati Reds and New York Mets at Riverfront Stadium. It was a damn good one, too, with both teams tied 5-5 heading into the ninth inning. Then, utter chaos took place.

In the top of the inning, with Howard Johnson standing on second base and representing the go-ahead run for the visiting Mets, outfielder Mookie Wilson hit a sharp ground ball to Reds shortstop Barry Larkin, who fired the ball across the diamond to Nick Esasky at first base.

Larkin?s throw, however, was a bit wide, and forced Esasky slightly off the bag to make the play. A few seconds passed until umpire Dave Pallone signaled Wilson safe, which also allowed Johnson to score the eventual winning run.

Cincinnati Reds manager Pete Rose quickly emerged from the dugout and lit into Pallone like a disappointed parent yells at their kid for arriving home after curfew. Words were exchanged and things escalated in a hurry.

Rose claimed Pallone poked him in the eye, which led to Rose shoving Pallone before the two were separated. The crowd, meanwhile, started booing and throwing trash onto the field. It also prompted a stern message on the jumbotron by Reds owner Marge Schott.

?PLEASE DO NOT THROW OBJECTS ONTO THE FIELD, OR THE GAME MAY BE FORFEITED. PLEASE ?COOL IT?. THANKS, MARGE?

That didn?t matter. Fans were pissed. They kept throwing debris as Pallone left the game. The Mets ended up winning 6-5.

This wasn?t a World Series game or even the National League playoffs. This was just an average April baseball game that turned ugly in a hurry.

For his actions of the on-field incident, MLB gave Pete Rose a 30-day suspension and $10,000 fine.

Dave Pallone, who ironically was the home plate umpire when Pete Rose tied Ty Cobb for most all-time hits, also umped the 1983 MLB All-Star Game, Nolan Ryan?s 4,000th strikeout and was a second base umpire when Houston Astros Mike Scott threw a no-hitter in the 1986 MLB playoffs.

He resigned from umpiring after the 1988 season and was ?outed? by the New York Post for being gay.

Pete Rose had a lot of great moments in his career. So did Dave Pallone. That game in Cincinnati was not one of them, but it?s still remembered to this day.