Although he star Atlanta Braves outfielder missed his team's World Series run due to an ACL injury, he's been one of MLB's brightest stars since making his professional debut in 2018, and it's clear to see where he gets his talent from.

Acuna isn't the only baseball player in his family. Far from it. The 24-year-old comes from a long line of ball players within his family, and they are all well-known back home in Venezuela.

RELATED: Druw Jones, Son of Former MLB Slugger, Has All the Makings of a No. 1 MLB Draft Pick

The Acuna family, which hails from La Guaira, Venezuela, is loaded with talent, and several members have even reached professional baseball. Acuna's father, Ronald Acuna Sr., is a fellow Venezuelan outfielder who spent eight years in the minor leagues with the New York Mets. His grandfather, Romualdo Blanco, was also a minor league baseball player. Additionally, Acuna is the cousin of former Major League Baseball players Alcides Escobar, Kelvim Escobarm and Edwin Escobar.

Alcides played 11 years in the big leagues for the Milwaukee Brewers and Kansas City Royals. Kelvim pitched 12 seasons in MLB for the Angels and Blue Jays. Edwin spent two seasons in the pros as a pitcher for the Red Sox and Arizona Diamondbacks.

Four years after we signed a 19-year-old Ronald Acuna, we have added his 19-year-old brother, Luisangel Acuna.

Acuna is also the cousin of Vicente Campos, who pitched in one game as a major leaguer in 2016. Acuna's uncle Jose Escobar also reached the MLB level with the Cleveland Indians in the 1990s.

His Family Helped Turn Him Iento a MLB Star 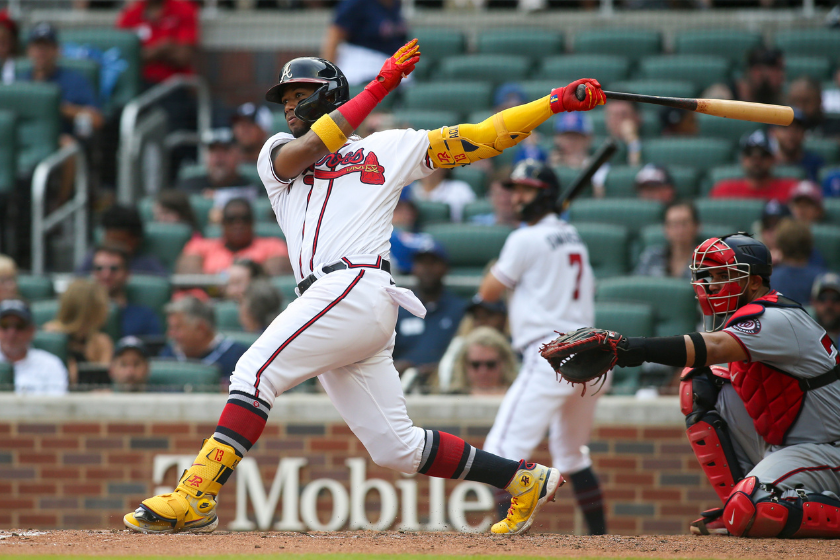 Ronald Acuna Jr. initially signed with the Atlanta Braves as an international free agent on a deal worth just $100,000. He made his pro debut for the Gulf Coast Braves in 2015, and began working his way up the minor league system. He was ranked in MLB.com's Top 100 prospects in 2017, among the likes of Ohtani, Soto and teammate Ozzie Albies. "El Abusador" made his MLB debut in 2018 after impressing at spring training and won the National League Rookie of the Year award.

He had his best season to date in 2019, when he launched 41 home runs, drove in 101 RBIs, 37 stolen bases and logged a .883 OPS. He made his first All-Star Game and finished fifth in National League MVP voting. Acuna featured in the Home Run Derby that year, advancing as far as the semifinals.

In 2020, Acuna became the youngest player in MLB history to sign a contract worth $100 million, agreeing to stick around in Atlanta through the 2028 season. He's certainly proven he's worth it. Although the outfielder missed a majority of the 2021 season, he was a key figure on the bench while Atlanta took the World Series title.

This year, he's returned to form with a .263 batting average and earned a starting spot for the National League in the 2022 MLB All-Star Game. He's also participating in the Home Run Derby, where he'll look to take the crown from home-run king Pete Alonso.

No matter where Acuna plays, his baseball loving family will be there to cheer him on.