Bull Durham is a timeless baseball movie. The 1988 film combined America's Pastime and romance in a classic way that few sports movies have ever done. Sorry, Major League and The Sandlot, but you just don't capture our hearts like this one.

That cast was something else, man. Kevin Costner played former major league player and veteran minor leaguer Crash Davis brilliantly, which is probably why he starred in Field of Dreams and other baseball movies like For Love Of The Game. But the real star of director Ron Shelton's movie is Susan Sarandon, who plays the seductive and smart baseball groupie Annie Savoy who swears by the "Church of Baseball." Trey Wilson (Joe Riggins), Robert Wuhl (Larry Hockett) and Jenny Robertson (Millie) also play prominent roles.

MLB.com not only called Bull Durham the greatest baseball movie ever made, but also summed its existence up perfectly: "Bull Durham is a movie that understands the romance and madness of baseball better than any movie ever has, and it has an all-timer cast."

The whole movie is centered around Savoy and Davis helping mentor the minor league baseball team and helping rookie pitcher Ebby Calvin "Nuke" LaLoosh develop while playing for the single-A Durham Bulls in North Carolina. While the iconic sports film distributed by Orion Pictures grossed more than $50 million at the box office across the United States, it also brought two actors together in real life.

Yes, despite Annie discovering her love for Crash by the end of the movie, she actually ended up with Nuke.

RELATED: Wendy Peffercorn is Still a Babe 27 Years After "The Sandlot"

Annie Savoy is played by Susan Sarandon, the actress who went on to star in Thelma & Louise (1991) and Dead Man Walking (1995).

Annie spends the entire movie romancing Nuke LaLoosh, who is played by Tim Robbins. She playfully ties him to his bed posts, reads to him and forces him to undergo some introspection as a budding baseball player. She says things like this: "There's never been a ballplayer slept with me who didn't have the best year of his career. Making love is like hitting a baseball: you just gotta relax and concentrate."

Aside from the memorable quotes like that, Annie and Crash's relationship becomes a main focal point. She and Nuke spent the Bulls' season as a couple before it's clear that Davis is a perfect match in the love triangle. By the end of the romantic comedy, Annie and Crash are together.

Despite the movie ending with Sarandon and Costner slow dancing in her living room, Sarandon actually fell in love with Tim Robbins in real life. In fact, they met on the set of the movie and fell in love.

What's crazy is that Robbins almost didn't earn the role. Charlie Sheen was the first choice to play Nuke LaLoosh, but he chose to act in Eight Men Out instead.

The two movie stars never tied the knot but became serious in 1988 and spent the next 20 or so years together before parting ways in 2009. Robbins directed a movie she starred in, Dead Man Walking, for which Sarandon won an Academy Award for Best Actress.

In an interview with AARP magazine, she credited the break-up to reflecting on death after her role in the broadway show "Exit the King."

"You can't do a meditation on death and stay in a situation that's not authentic," she told AARP magazine. "It made me examine where I was in my union and in my life, and to have discussions about making changes."

Sarandon then dated a man half her age, Jonathan Bricklin, and co-owned a ping pong franchise called SPIN with him. She was previously married to actor Chris Sarandon, who she was eloped to from 1967 to 1979.

They Had Two Kids 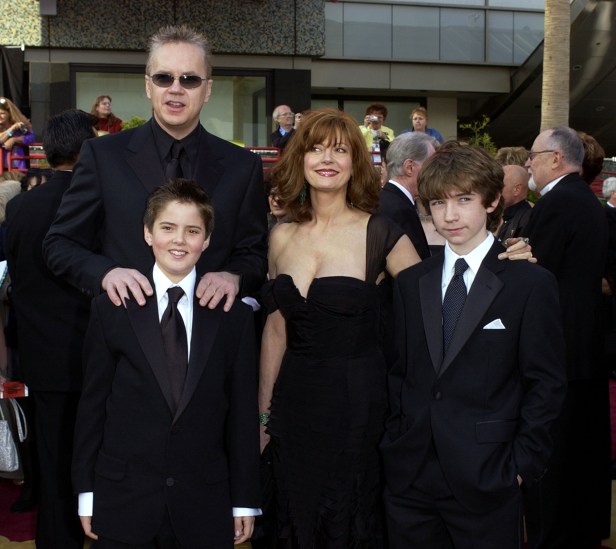 Sarandon and Robbins clearly had chemistry together. They also had two children.

John "Jack" Henry Robbins was born in 1989. Miles Robbins was then born in 1992. Jack took to Hollywood like his father as a director and writer in movies like Opening Night (2016) and Painting with Joan (2017). Miles also worked as an actor and a musician.

Baseball films like Bull Durham rarely come around. Publications like Sports Illustrated even ranked it the single best sports movie of all time. But who knew it actually brought two actors together in real life?