Will Vladimir Guerrero Jr. Be Better Than His Hall-of-Fame Father? 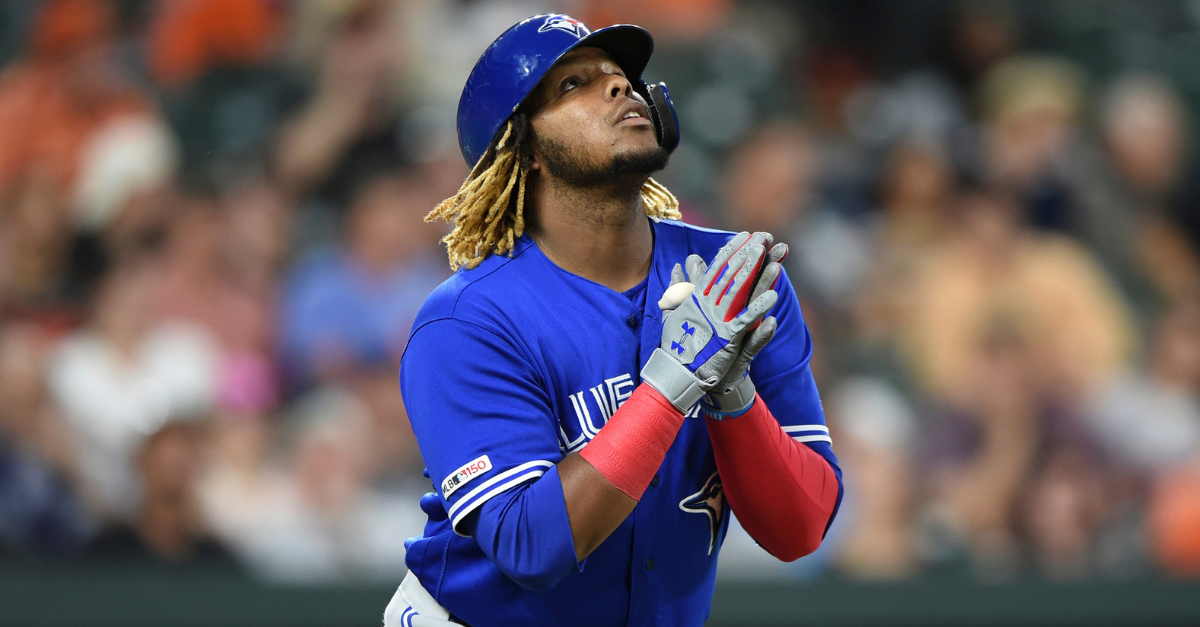 Major League Baseball has had some pretty remarkable father-son duos throughout history. Before Mike Trout supplanted himself as the current GOAT, Ken Griffey Jr. was tearing up pitchers on the same team as his dad — the two even hit back-to-back home runs once.

Cecil Fielder and son Prince Fielder both established themselves as two of the more dominating power hitters in their eras and amazingly both finished with 319 career home runs. Add those totals and you still get nowhere near the 1,094 dingers Barry Bonds and father Bobby Bonds combined to slug.

Now, the next great father-son duo has arrived. Toronto Blue Jays third baseman Vladimir Guerrero Jr. is taking the baseball world by storm in 2019, less than a year after his dad, Vlad Guerrero Sr., was inducted into the Baseball Hall of Fame.

This begs the question: Will Guerrero Jr., AKA “Vladito”, wind up being better than the man who taught him everything he knows?

(First, watch this tribute video if you wanna get emotional.)

Let’s start by saying there’s no wrong answer. Papa Guerrero is a Hall of Famer for a reason. You don’t just roll out of bed and collect 2,500 hits, nearly 450 home runs and hit .318 over the span of 16 years.

Guerrero Sr. earned the reputation as a “bad-ball hitter” — watch this video of him notching a hit on a pitch that bounces to understand that phrase — for his ridiculous plate coverage and ability to put the bat on any given pitch. He also had a rocket attached to his right shoulder.

A nine-time All-Star, eight-time Silver Slugger and 2004 American League MVP, Guerrero Sr.’s career is hard to top. Who better to try than someone with the same DNA, though?

Vladito has baseball in his blood. His uncle, Wilton Guerrero, played on the Montreal Expos with his father. His cousin, Gabriel Guerrero, plays in the Miami Marlins organization. Guerrero Jr. was even born in Montreal, Quebec, Canada, while dad played for the Expos in 1999.

One of the top international free agents of his 2015 class, the Canadian-Dominican slugger signed with the Toronto Blue Jays for $3.9 million in July of 2015.

He blazed his way through the minor leagues, including when he hit a Ted Williams-esque .402 and clubbed 14 homers in 61 games at AA in 2018 and continued demolishing pitching at Triple-A Dunedin following that.

Despite his video game-like numbers in the minors, the Blue Jays sent him back to AAA following spring training to open the 2019 season for controversial service time manipulation reasons.

How do you send a guy back to the minor leagues when he does this in Canada?

Vlad Jr. for the win.

Guerrero Jr. made his much anticipated MLB debut on April 26 against the Oakland A’s in Toronto, when he went 1-for-4 with a double. He smashed his first two homers in one game against the San Francisco Giants on May 14.

So far the 20-year-old’s young career hasn?t gone quite like New York Mets rookie sensation Peter Alonso — Vladito?s hitting .246 with seven long balls and 20 RBIs through 183 at-bats — but he’s too talented to keep hitting like that.

Truth is, there hasn’t been a mega prospect of Guerrero Jr.’s magnitude since maybe Bryce Harper, the 2010 first-overall pick whose name had been marinating in the minds of baseball fans since he graced the cover of Sports Illustrated as a high school phenomenon. MLB.com wrote in their top prospect rankings in 2011 that some scouts felt Harper had “the most power potential of any prospect … ever.”

Meanwhile, Guerrero Jr. has been dubbed a future MVP and Hall-of-Famer before ever seeing a pitch in the Major Leagues. While that’s unfair to any young prospect or player, I think he’s handled the expectations fine. It?s not like there?s a ton of pressure either for a team that trails the AL East first-place Yankees by more than 20 games.

Vladimir Guerrero Jr. now has exactly the same number of at-bats his dad had before his MLB debut. Through 1,055 AB's,

Fans who haven’t watched any Blue Jays games this year will get a chance to see Guerrero Jr. blast baseballs on a national stage in the Home Run Derby in Cleveland, because he announced he’s participating in the event. His dad won the event in 2007 at San Francisco’s AT&T Park.

Vladito isn?t the same type of player his dad was. At 6-foot-2, 250 pounds, he?s much stockier than his long, athletic father was.

But Junior does possess a lot of the same tools: light-tower power, the ability to hit to all fields and a low strikeout rate that should result in high averages.

What?s crazy is that?s Vlad Jr. isn?t even the only prospect in his organization whose dad played in the big leagues. Cavan Biggio (son of HOFer Craig Biggio) is currently playing alongside Guerrero and Bo Bichette (son of Dante Bichette) is waiting in the wings in AAA. Bichette is the club’s No. 2 prospect while Biggio is No. 9.

This phenomenon isn’t uncommon across North American sports. Before Stephen Curry or Klay Thompson became NBA playoff staples, their fathers Dell Curry and Mychal Thompson were lighting it up. The same can be said for the NFL, which has had a million father-son duos, including the Mannings.

It?s way too early to tell if the Vlad Guerrero Jr. will be better than his dad, but for everyone?s sake, let?s hope he is.