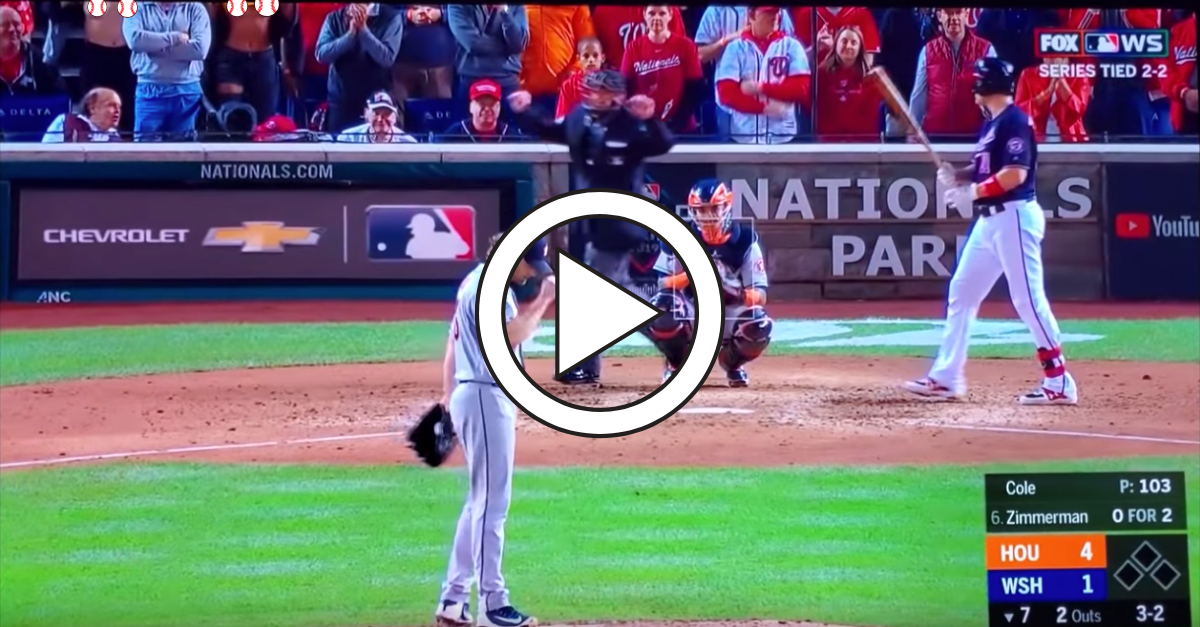 Whether it’s softball or baseball, you’ve likely heard traditional jeers and taunts used to rattle opposing players. “Hey batter, batter! Swing batter, batter!” You know, normal and sane things like that. But planting two attractive women behind home plate and having them expose their God-given assets in front of the entire world? That’s a level of distraction even Houston Astros pitcher Gerrit Cole couldn’t help but notice.

Houston led Game 5 of the 2019 World Series, 4-1, in the bottom of the seventh inning. As Cole prepared to throw his 104th pitch of the night, it was apparently time for two invaders wearing yellow shirts to get their five seconds of fame. The pair exposed their bare chests being home plate on national television, which caused Cole to, naturally, call timeout and step off the mound.

The game was stopped momentarily as the flashers were quickly descended upon and escorted out of Nationals Park.

The mystery women later identified themselves as Instagram model Julia Rose and Lauren Summer, who, with one look at their Instagram accounts, have no problem flashing skin in public places. The women’s stunt was apparently an ode to breast cancer awareness, although I think buying a pink sign and T-shirt probably would have done the trick.

As you would expect when a pair of breasts are unveiled on baseball’s biggest stage in front of millions of people, both women, as well as a third woman named Kayla Lauren, were banned for life by Major League Baseball.

“On October 27, 2019, you attended World Series Game 5 at Nationals Park in Washington, D.C. Duing the game, you violated the fan code of conduct by exposing yourself during the 7th inning, in order to promote a business. You were also part of a scheme in which you induced others to expose themselves to promote a business.

“You are hereby banned from all Major League Baseball stadiums and facilities, indefinitely.”

? Letter from David L. Thomas, VP of Security and Ballpark Operations for MLB

Areolas aside, the Astros defeated the Washington Nationals on Sunday night to take a 3-2 series lead back home to Houston.

The business Thomas mentions in his letter is a digital magazine called ShagMag, which was founded by Rose. I can’t exactly figure out what they do aside from make hyper-sexualized YouTube videos, but the company’s website includes a statement from Rose that reads, in part: “I wanted to create place that was fun but one that still had meaning. There is nothing wrong with sex and nudity, and wanting more of it but I definitely think our generation needs more of a voice.”

Well, I hope the live TV stunt was worth it. Rose told Complex that she spent a year planning the stunt and tickets cost her $80,000.

This article was originally published October 28, 2019.

MORE: President Trump Gets Boos, “Lock Him Up” Chants at World Series