Growing up, you probably played either softball or baseball in your town's youth leagues. Heck, even as adults you've likely played in a local baseball league or slow-pitch, bar league softball tournament at some point. According to Statista, around 30 million Americans play at least one game of either softball or baseball every single year. Both sports do not take the physical toll on our bodies like football or basketball can, which makes them more popular amongst all ages than any other team sport. After all, it's no surprise that Bartolo Colon went from punching out MLB hitters to hitting Softball home runs in no time at all.

Both games may look similar at first glance, but they couldn't be more different. Sure, the basic concept is the same -- hit a ball and score more runs than the other team -- but each sport offers its own set of challenges. Everybody loves a good debate, but the feud between fast-pitch softball supporters and baseball die-hards is one that never seems to be answered. I'm going to take you through each facet of these wildly popular games and determine, once and for all, which sport is really harder to play. Let's dig into the battle of baseball vs. softball. PLAY BALL!

Did Softball or Baseball Come First? 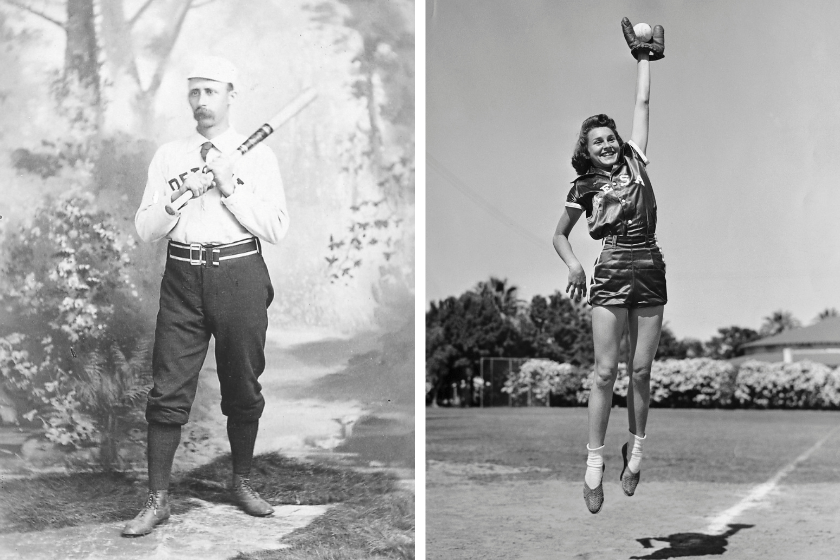 If you've heard the name Abner Doubleday floating around, you might remember that he's often credited with inventing baseball in Cooperstown, New York back in 1839. It turns out, that's not entirely true, but the Cooperstown businessmen heralded the story as a fact when establishing the National Baseball Hall of Fame.

As History.com tells us, the real story is much simpler:

"References to games resembling baseball in the United States date back to the 18th century. Its most direct ancestors appear to be two English games: rounders (a children's game brought to New England by the earliest colonists) and cricket.

"In September 1845, a group of New York City men founded the New York Knickerbocker Baseball Club. One of them--volunteer firefighter and bank clerk Alexander Joy Cartwright--would codify a new set of rules that would form the basis for modern baseball, calling for a diamond-shaped infield, foul lines and the three-strike rule."

Baseball is widely known as America's Pastime even though it's played all over the world and has been for over 100 years. Only recently have rule changes begun to modernize the game, but baseball still remains one of our country's most popular sports to play.

Many people believe softball is a direct descendant of baseball. In fact, it was actually a college football game that first created softball. On Thanksgiving Day 1887, several people awaited the outcome of the Yale versus Harvard football game at Chicago's Farragut Boat Club. After Yale was announced the winner, the celebration that ensued inadvertently created a brand new sport.

"During the merriment, a reporter from the Chicago Board of Trade, George Hancock, tied up a boxing glove (with its own strings) into a sphere, took a broomstick handle, and, using chalk, marked lines on the floor. That night a game took place with 80 runs scored, and from there the sport had been born. The first rulebook is said to have been issued (by Hancock) in 1889."

Although originally played indoors, softball moved outside and evolved into a huge amateur sport played by American servicemen during World War II. In 1952, the International Softball Federation became the sport's governing body and still is today. In 1991, women's fast-pitch softball was added to the 1996 Olympic Games, which is considered its crowning moment as the game finally arrived on the international stage.

Throwing a Softball vs. Baseball 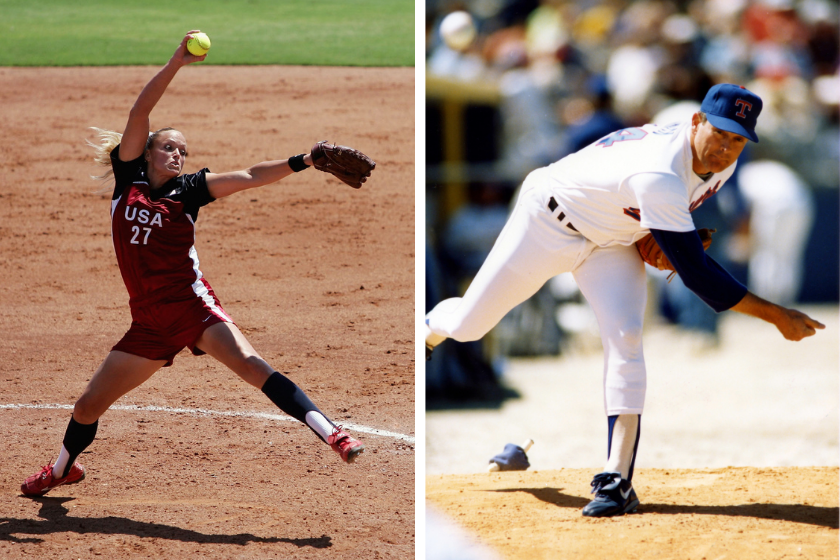 Related: Step Into the Batter's Box and Face a 100 MPH Fastball With The 'Nolan Ryan Cam'

The most obvious difference is the pitching style of both sports -- Baseball pitchers throw overhand and softball pitchers throw underhand. Both deliveries offer advantages and disadvantages, but the most notable are the wide range of ways a pitcher throws the ball in baseball as opposed to softball.

In softball, there are a few popular pitches most softball pitchers start with, like the fastball, changeup, drop ball, curveball and rise ball. Pitchers utilize these with various grips and releases, which gives them a varied arsenal, as CoachUp.com explains.

When it comes to baseball pitching, the story is much different.

When it comes to variety, baseball wins this category. A smaller ball and various arm angles -- from classic overhand deliveries to sidearm and submarine specialists -- a baseball pitcher's delivery adds so many possibilities to what a batter might see when the ball leaves the pitcher's hand. However, even though there are a lot of different pitches, that doesn't mean a fastball in baseball is necessarily harder to hit than a fastball in softball. 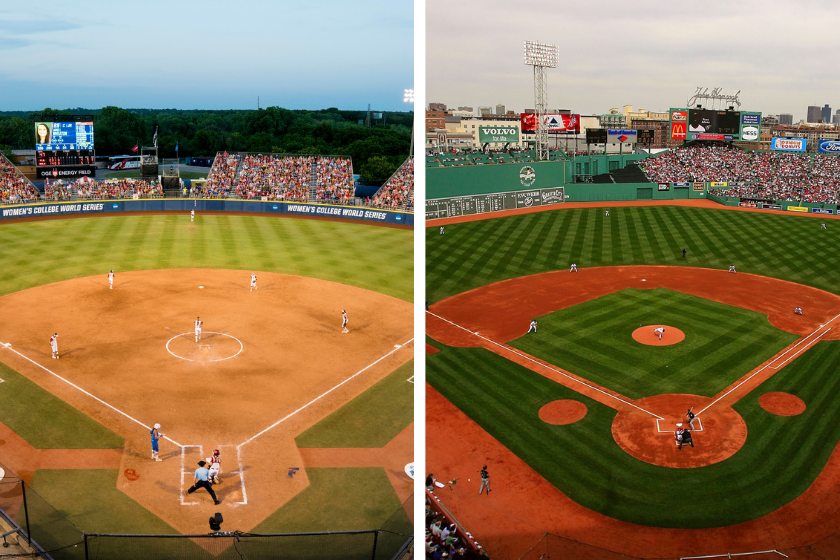 It doesn't take long to realize that, while they look similar, softball and baseball fields are dramatically different.

Major League Baseball field sizes differ along the outfield fence depending on the design of each ballpark, but everything inside the lines remain the same. A baseball pitcher's mound is raised 10 inches in the air and is 60 feet, 6 inches away from home plate. The distance from home to first base is 90 feet and is the same at each stop around a baseball diamond.

Softball pitching mounds, or pitching circles, are unlike baseball mounds in that they're not raised off the ground. Softball pitchers stay within a designated pitching area on their release and the pitching distance is only about 35 to 43 feet from the mound to home plate. Also, the base paths in softball are just 60 feet away from each other, which are actually identical to Little League baseball fields.

This difference in the base paths allows baseball players to lead off while on base, while softball players cannot.

Softball is played on a much smaller field which makes it way more difficult to get on base, though that doesn't necessarily make it any easier on the fielders. This is evidenced by the large numbers of no-hitters and complete games thrown by softball pitchers at every level compared to the relatively small number of baseball pitchers being able to do it.

Since 1983, there have been more than 330 no-hitters in ALL of NCAA Division I college baseball.

Score this one for softball by a landslide. 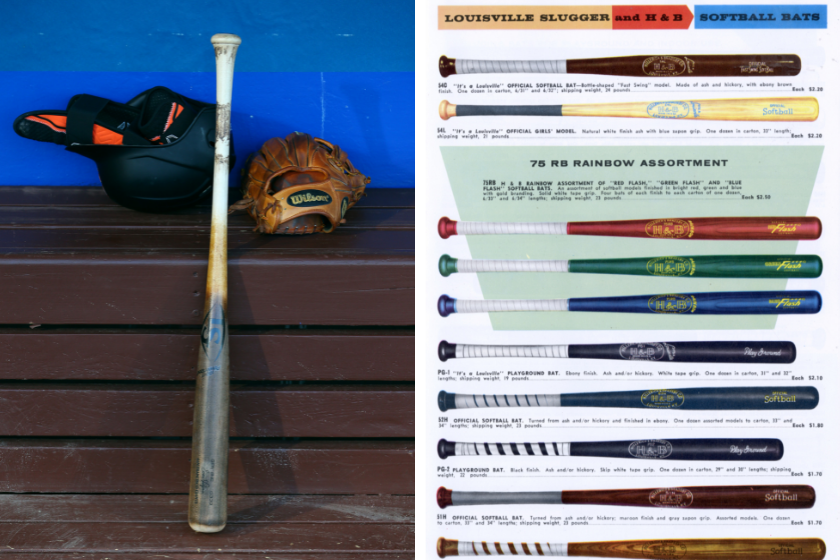 By design, softballs are larger than baseballs. The first softballs were actually 16 inches around, but today, the size of the ball is about 11 or 12 inches in circumference and weighs about seven ounces. This difference is made up in both gloves. Regulation softball gloves have a deeper pocket while baseball gloves are more shallow but are slightly longer.

Baseball fields are naturally bigger than softball because the dimensions of the baseball, which weigh about five ounces and is nine inches around, cause it to fly farther. Isn't physics fun?

Softball bats are typically longer, but baseball bats have a larger diameter to strike the ball with. While MLB players strictly use wooden bats, all softball teams, college baseball teams, all high school levels, and on down through youth baseball typically use some type of composite or alloy bats.

The bat each sport uses, plus the gloves that players use to catch, make up for the difference in size between a softball and baseball. This one's a wash.

No advantage here with equipment. We'll call it a tie.

Does Softball or Baseball Pitch Faster? 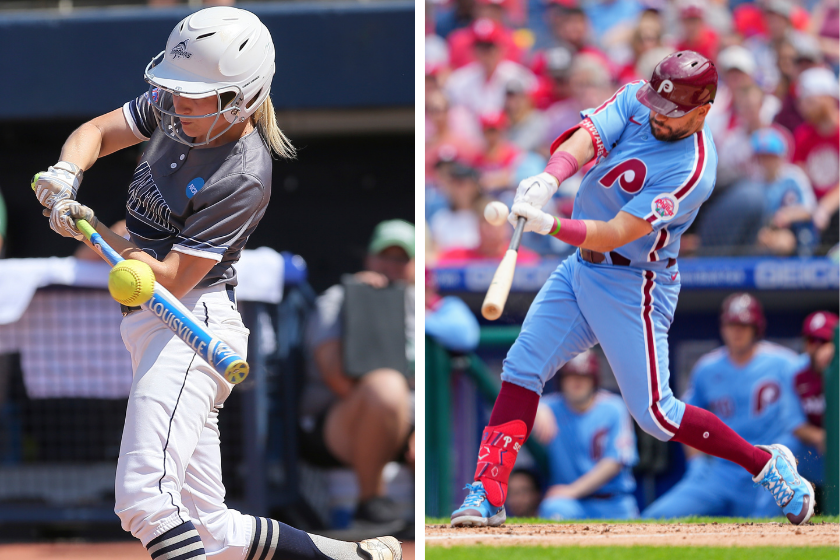 If you ever look at a radar gun measuring pitch speeds at the highest level of both games, baseball pitches are typically 15 to 20 miles per hour faster than softball pitches. But when you take into account that baseball mounds are farther away (and higher up) compared to softball mounds, the gap between these two games gets even further apart.

ESPN's Sport Science broke down the speed of both games, pointing out that a 70 mph softball pitch -- from its shorter distance -- reaches home plate faster than a 100 mph baseball pitch. That means a softball player has less than half the time (.025 seconds) to decide to swing compared to a baseball player (.055 seconds). Now imagine trying to decipher whether or not that pitch headed your way is in the strike zone or not.

When discussing one of the most feared pitchers in MLB history, players often talk about how hard it was to hit Bob Gibson's "rising" fastball. As scientists will point out, it is almost impossible to make a baseball move upwards when throwing overhand, but Hank Aaron has often said that "rising fastballs were impossible to hit." Well, guess which sport has rising fastballs? That's right. The fact that depth and upward sweep can come into play AS WELL AS speed, is something baseball simply cannot argue with. Softball is ridiculously difficult for hitters. No two ways around it.

Need even more proof? On average, a softball shortstop has less time to react to a softball hit their way (.61 seconds) than a tennis player has when reacting to a serve from Serena Williams (.65 seconds). Not an ideal situation to be in unless you have cat-like reflexes.

Do yourself a favor and watch USA Softball gold medalist Jennie Finch make MLB slugger Albert Pujols -- a three-time MVP with over 600 career home runs -- look like a complete fool.

Sorry, Albert. Softball goes up on baseball, 2 to 1. 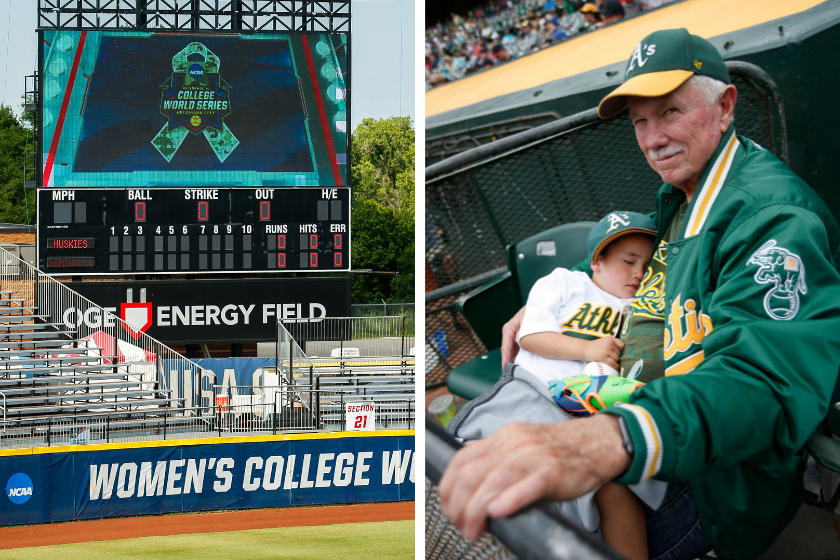 Softball games are most commonly only seven innings, just like college and high school baseball games are. One of the biggest knocks on the MLB and college baseball is that games are SO DAMN LONG. They're the only level of either sport where games are nine innings.

Even with Major League Baseball doing everything it can to shorten its games in recent years, professional baseball games are getting longer every decade and today are typically at least three hours long.

Not only are softball games shorter in length, but fewer innings mean fewer opportunities to score and, obviously, win. International softball rules even begin extra innings with a runner on second base in an effort to keep games from going too long. MLB has not adopted this rule as well.

Chalk up another win for softball.

The Final Tally: Softball vs Baseball - Which Sport Is Harder? 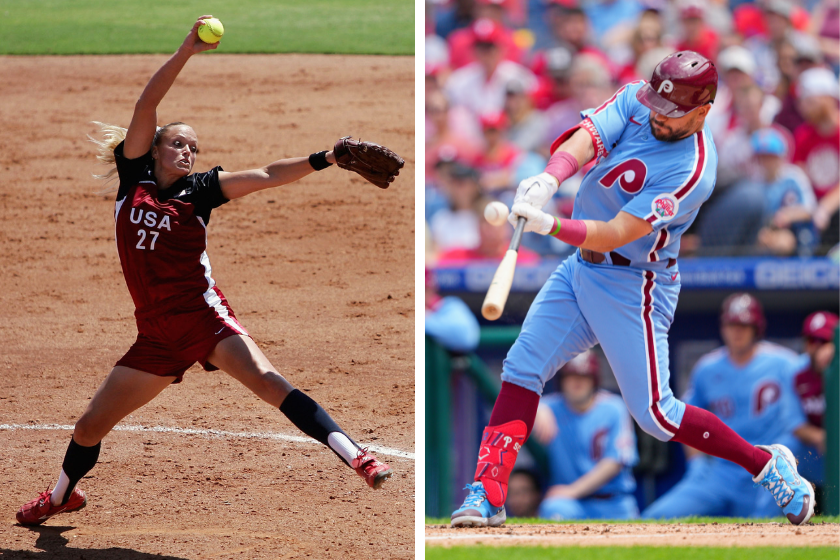 Traditional baseball gurus will take the game as it was in 1845 to their graves. That's fine, have your bunting and balks, but the truth of the matter is that softball is harder to play, requires faster reaction time, and is much more fun for fans to watch. In recent years, players who have come over from Japan's Nippon League to Major League Baseball have brought a similar style of play that can be seen in the Softball world. Ichiro Suzuki's slap hitter style looks extremely similar to the swings you'll see on a Softball diamond. The game of softball is simply so much faster and if MLB continues to have issues with its pace of play, they may need to sit down and watch a softball game to take notes.

Overall, fast-pitch softball is harder to play and, honestly, a lot more fun to watch than baseball.

MORE: The "Slip Pitch" is Softball's Most Deceitful Trick