It's odd that the New York Yankees can't seem to get over the hump. The Yankees repeatedly capture Major League Baseball's American League East Division. They did so again in 2022, winning 99 games and advancing to the postseason.

In the end, it was another grim October disappointment for New York. The Yankees were swept out of the American League Championship series on Sunday, losing 6-5 to the Houston Astros in Game 4. "It's an awful day, just an awful ending," Yankees manager Aaron Boone said after the Game 4 loss. "It hurts."

At this point, one must ask: What does all the prosperous history and money get you? Nothing, it appears. New York has been in the midst of a World Series drought since its last championship in 2009. "You want to be on that stage, you want to be playing for all of it. You've got to keep fighting for it," Boone said. Amazingly, New York has been unable to put together a run to the World Series throughout the entirety of the 2010s. The team made the postseason seven times during this decade and the ALCS four times. 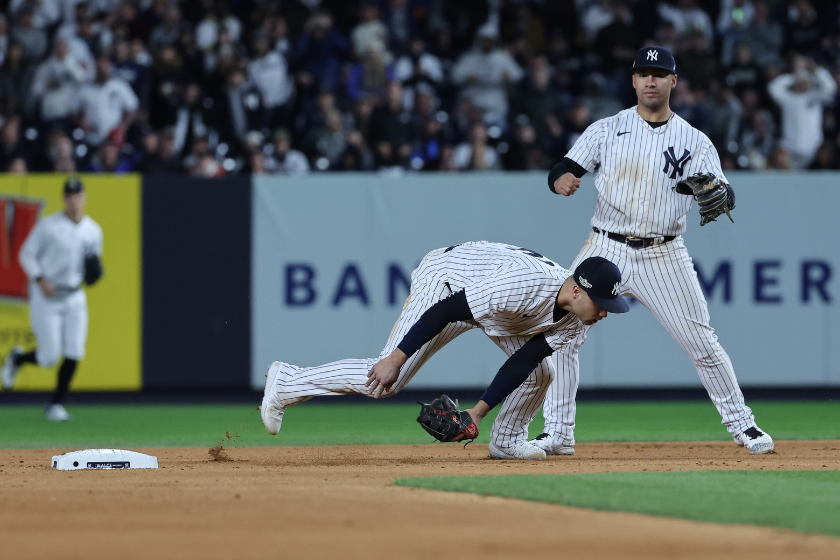 Photo by Thomas A. Ferrara/Newsday RM via Getty Images

One would think that even a team that had dragged itself into the postseason would have a chance to finally win it all or get to the World Series after continuously making the playoffs. What's worse, the Yankees have not only made the postseason several times in recent years but also have come into the playoffs with short championship odds and some of the best talent of any roster in the league. New York won the division in three of the seven postseason years during the 2010s. Additionally, the team had the best record in the American League in both 2011 and 2012.

And the talent and level of play on the Yankees have remained if not grown, making it harder to find a reason the team can't succeed in October.

New York also had Judge, outfielder Giancarlo Stanton and catcher Jose Trevino make the All-Star team. On the pitching staff, New York sent Nestor Cortes and Gerrit Cole alongside Clay Holmes out of the bullpen to Los Angeles for the All-Star contest. With a total of six players on the roster in 2022, the Yankees led the American League in All-Star selections.

The San Francisco Giants also had plenty of success in the 2010s. The Giants won the World Series three times -- in 2010, 2012 and 2014. During one of those runs, the team had to win the Wild Card spot first (2014). Interestingly, the Giants made the playoffs only one other time in the 2010s, in 2016, when they were bounced in the division series by the Cubs. If a team like the Giants can win it all three times with fewer resources than New York, it seems there is no excuse for the Yankees not get back to the big stage.

The answer to the mystery of why the Yankees haven't won more championships in the past 10 to 15 years is as dubious as the question of why the Los Angeles Dodgers can't win more. New York has an MLB-best 27 world championships in the past and an incredible budget, as the team is valued to be worth $6 billion. It isn't obvious what the Yankees must do to win another trophy. Some blame Boone, the team manager; some blame general manager Brian Cashman. Others blame the players, or a lack of luck. If one thing is clear, though: Regular-season success has little correlation with postseason success in Major League Baseball.

"You get back on the horse and try and put yourself in the best position to be successful," Boone said. "The grind of the season sometimes puts you in a great position, sometimes it makes it more challenging."