The New York Yankees are a franchise born for the postseason. Baseball players become legends when they don the pinstripes in October and take the field in front of Major League Baseball's most loyal and well-traveled fan base.

Think about it. Reggie Jackson didn't earn his "Mr. October" nickname until he clubbed three home runs against the Los Angeles Dodgers in Game 6 of the 1977 World Series to help the Yankees win a title. Derek Jeter, who didn't need a single career-defining game to be cemented in New York lore, might be best know for "the flip" that caught Jeremy Giambi at home plate and doomed the Oakland Athletics in the 2001 ALDS.

Face it: There's just something special about the Bronx Bombers when the MLB playoffs roll around. They're the last team you want to face and the first you want to join if you get the chance.

Yes, before he was peering over the ledge of the Yankees dugout as the club's manager, he was clobbering an extra-inning walk-off home run against his archrival in the 2003 ALCS to send the Yankees to the World Series. 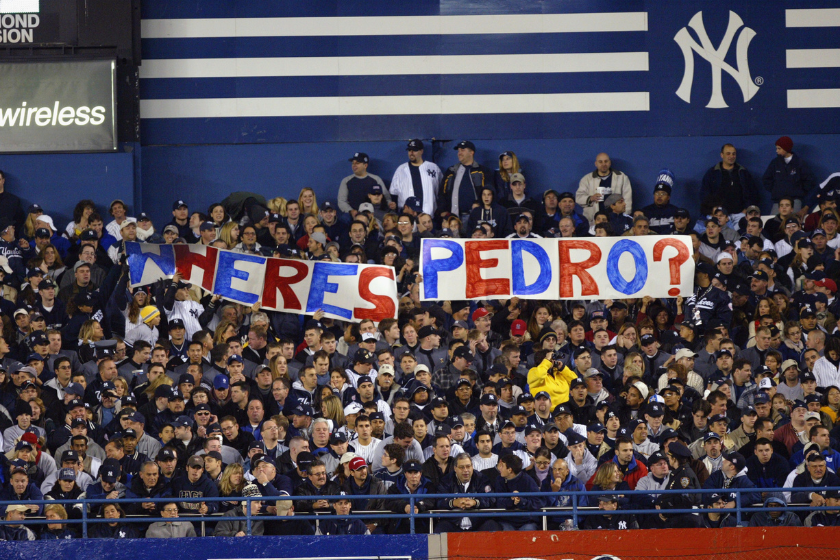 Let me set the scene.

The Yankees and Boston Red Sox are tied, 3-3, in the American League Championship Series. Boston hasn't won a World Series since 1918, still plagued by the Curse of the Bambino. Red Sox fans are on edge for an ALCS Game 7 for a chance at winning the pennant and finally ending that title drought.

There may not be a more heated series between the two rivals in history, or between any two teams, for that matter. Game 3, which pitted future Hall-of-Famer Pedro Martinez and former Red Sox great Roger Clemens against each other, was the infamous game in which Martinez threw 72-year-old Don Zimmer to the ground during a brawl.

Game 7 was a rematch of that emotional game between those two pitchers, both of whom are two of the greatest to ever take a mound. Boston jumped out to a 4-0 lead by the fourth inning following home runs by Trot Nixon and Kevin Millar.

The Yankees chipped away via Jason Giambi solo home runs in the fifth and seventh innings. Boston's David Ortiz launched a solo shot of his own in the eighth, leaving New York down 5-2 with two innings worth of at-bats left.

Yankee magic was in the air, as the Bronx Bombers scored three in the bottom of the eighth off a tired Martinez to knot the game up at 5-5. The hit parade was led by Jeter, Bernie Williams, Hideki Matsui and Jorge Posada. Yankees closer Mariano Rivera came out of the bullpen and pitched three scoreless frames to keep the game tied.

The score remained unchanged until the first pitch of a matchup between Aaron Boone and Red Sox knuckleballer Tim Wakefield in the bottom of the 11th inning. It was a pitch Wakefield probably wishes he could have back.

Boone, who was just 2-for-16 that series, yanked Wakefield's floating offering into the night sky at Yankee Stadium and hooked it just inside the left field foul pole. An eruption worthy of registering on the Richter scale immediately took place in the Bronx.

"Boone hits it deep to left!" Fox announcer Joe Buck exclaimed. "That might send the Yankees to the World Series! Boone a hero in Game 7!"

As if the moment couldn't get more awesome, Aaron's brother, Bret, happened to be a guest announcer alongside Buck and Tim McCarver for the game. He didn't say much, but it was almost better to let the moment play out without interruption.

After the celebration around home plate, Boone made his way to field reporter Curt Menefee. His first words: "Wow!...I...I...I can't even talk."

Speechless, as one should be after hitting the biggest home run in your franchise's history.

Boone, a career .263 hitter with 126 career home runs to his name who drove in a career-high 96 RBIs in 2003, sent the Yankees to the World Series and crushed their most hated rival in the process. The only way the walk-off dinger could've been more special is if it had won the World Series itself.

From Castaway to Unlikely Hero

Did you know?: On 9/27/98, the Reds became the first team ever to start two sets of brothers in the infield.

It was the only big league game of Stephen Larkin's career. pic.twitter.com/n9GqgFXN5p

Part of why Boone was such an unlikely hero was because he wasn't even a Yankee on Opening Day. The Yankees acquired him from the Cincinnati Reds in July after the Reds fired manager and Aaron's father Bob Boone.

He also didn't even start the game. Enrique Wilson, whose early throwing error gave the Red Sox an extra run, started at third. Boone pinch ran for Ruben Sierra in the eighth inning and stayed in the game at the hot corner.

"Not a week goes by that I'm not reminded of how big the New York Yankees are or how big their reach is," Boone told MLB.com. "I've had hundreds of stories told to me about where people were or what side they were on."

The Yankees wound up losing the World Series to the underdog Florida Marlins (now Miami Marlins), who beat the Chicago Cubs in the NLCS. In 2004, the Evil Empire blew a 3-0 lead in the ALCS to the Red Sox, who finally broke the curse that year. Boone only played a few more years for various clubs before calling it quits as a player.

Now in 2022, Yankees manager Aaron Boone is leading the team he became a legend for. Backed by sluggers like Aaron Judge and Giancarlo Stanton and pitchers like Gerrit Cole and Clay Holmes, his Yankees are hoping to out-duel the American League field on their way to a World Series title, starting with third baseman Jose Ramirez and his Cleveland Guardians. If the Yankees defeat Cleveland in the division series, they'll head to Houston to face off against the Houston Astros.

The Yankees are trying to avoid the fate that the Blue Jays, Dodgers, Braves and Mets have had in 2022, by getting bounced in their first postseason series.

Regardless of his record of success in October, Boone's becoming a postseason staple in pinstripes, only now he looms in the dugout, hoping he sends the right chess piece to the plate the same way Torre did almost two decades ago.

Every franchise has their moments and heroes. David Freese became a St. Louis Cardinals World Series hero for his huge hits against the Texas Rangers in 2011, the same year Evan Longoria sent the Tampa Bay Rays to the playoffs.

Roy Halladay's postseason no-hitter for the Philadelphia Phillies in 2010 and Magglio Ordonez's walk-off home run to send the Detroit Tigers to the World Series in 2006 were epic.

Joe Carter's 1993 World Series walk-off home run for the Toronto Blue Jays and Luis Gonzalez's walk-off single to win the 2001 World Series for the Arizona Diamondbacks are moments you dream of as a kid.

Boone's home run wasn't the only one in Yankees history to send them to the World Series. Chris Chambliss did so against the Kansas City Royals in 1976.

But how many of these great moments occurred in a rivalry as storied as the Yankees and Red Sox? For that, Boone's blast should be remembered as one of the best in the history of the game.

This post was originally published on October 18, 2019, and has been updated since.