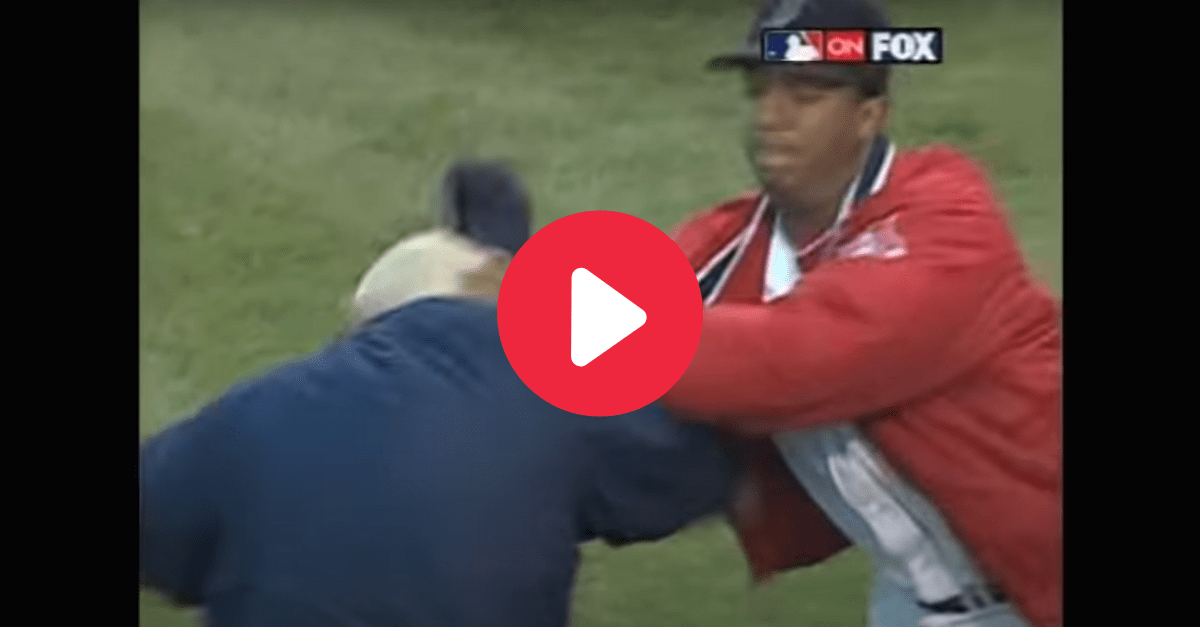 The New York Yankees versus Boston Red Sox is baseball’s fiercest rivalry, and good luck arguing otherwise. In over 2,000 career meetings, the Yankees hold the edge winning almost 200 more games, but both teams have split their postseason series at two apiece. Over the years, the Yankees and Red Sox have had their fair share of bad blood spill onto the field, but no moment is as infamous as Game 3 of the 2003 American League Championship Series.

The ALCS was tied 1-1. That third game featured an all-time great pitching matchup — Pedro Martinez vs. Roger Clemens — with tensions already high before the first pitch was thrown. In the top of the fourth inning, things went from calm to crazy in about half an hour, and Fenway Park turned into a complete free-for-all.

In the top of the fourth, Martinez hit New York outfielder Karim Garcia with a fastball. Once on first, Garcia slid hard into second base, knocking down Boston’s Todd Walker, which caused a small scuffle. The dugouts emptied briefly, but the melee was contained. Martinez and Yankee catcher Jorge Posada exchanged words, with Martinez making a gesture as if to say, ‘Watch your head next time.’

When Clemens took the mound in the bottom of the fourth, the MLB legend retaliated.

A high fastball right at Boston’s Manny Ramirez forced the cup to run over. Home plate umpire Alfonzo Marquez did all he could to stop what was about to happen, but it was in vain. A bench-clearing brawl began, pushing and shoving ensued, and chaos took over the ALCS.

That’s when 72-year-old Yankees bench coach Don Zimmer, who’d managed the Red Sox from 1974 to 1980, charged out of the dugout like a bat out of hell. Who should be waiting for him other than Pedro Martinez, who grabbed the wild old man by his melon and threw him away like an old bologna sandwich.

Martinez later called the moment ‘my only regret’ of his Hall of Fame career.

A 13-minute playoff game delay ensued, but nobody was immediately ejected. Fenway Park made the decision not to sell alcohol for the rest of the game.

The fight didn’t matter in the end, as the series turned into an all-time classic that ended with one of baseball’s finest moments.

It was Game 7 at Yankee Stadium in the Bronx. The deciding game was tied 5-5 in the 11th inning. Tim Wakefield threw a knuckleball on the first pitch of the inning, which New York legend Aaron Boone launched over the left field wall for a home run to send the Yankees to the World Series.

2003 might have ended without an American League title, but the 2003 ALCS at least gave us two moments — one good and one bad — that will stand the test of time in Major League Baseball history.

This article was originally published June 5, 2019.