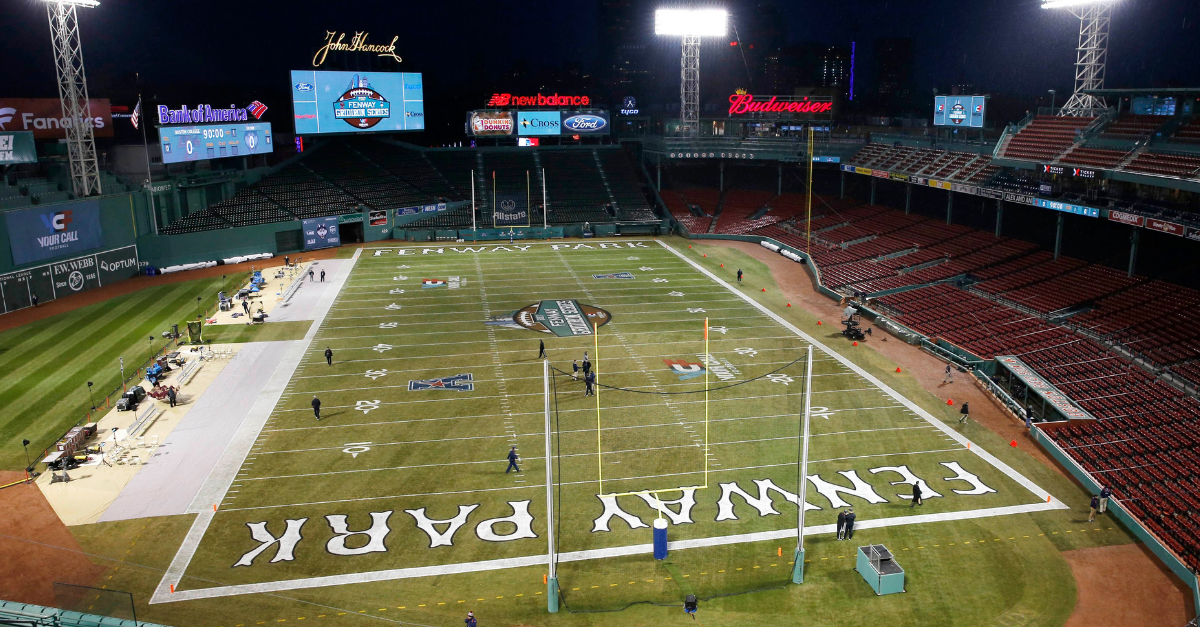 College football does not need any more bowl games. Sure, the payouts are nice and the players get a bunch of new swag, but there?s already a massive problem with stars not playing in order to prepare for the NFL Draft, and the latest report makes about as much sense as selling this pair of dirty jeans for a few hundred dollars.

This will now mean the NCAA will have a record 42 bowl games in a couple of years ? 43 if you are technical and want to include the College Football Playoff National Championship Game ? as Boston, Los Angeles and Myrtle Beach get added to the new bowl cycle.

ACC & American will play in new bowl game at Boston’s Fenway Park starting in 2020, sources told @Stadium. Addition of Boston bowl will mean 43 bowls in 2020 so 65% of all college football teams will go bowling https://t.co/xM94Pq2QRh

RELATED: Ranking Bowl Games by Their Weird Sponsors That in No Way Relate to Football

Nothing about this sounds like a good idea. In fact, it?s a terrible idea. It might mean more money, which is the driver of basically everything in college football these days, and there is something about this particular game in Massachusetts that screams disaster.

The name is still yet to be decided, but expect it to be crazy as Fenway Park will become the third Major League Baseball stadium to host a bowl game each year. New York?s Yankee Stadium (Pinstripe Bowl) and Arizona Diamondbacks? Chase Field (Cheez-It Bowl) are the other two.

Starting in 2020, a record 43 bowls (including the CFP title game) will be held and 65 percent of the 130 FBS schools (84 teams) will play in a bowl. @Brett_McMurphy discusses the new bowl game at @fenwaypark. pic.twitter.com/isKs9khy2R

Why is this such a bad idea? This argument could go on for hours, so I will try to make it quick.

Fenway Park used to host Boston Patriots games back in 1960s, according to NBCSports.com, and didn?t have them again until Notre Dame and Boston College battled on the gridiron back in 2015. It recently hosted Harvard and Yale?s football game last year, which was pretty cool, too. America?s oldest ballpark has a lot of charm.

However, if you have ever been to a college football bowl game at a baseball stadium, it?s not exactly the greatest seat in the house. Let?s just say it?s awkward. There?s strike one.

Strike two would be the weather. While some FBS bowl games provide optimal destinations for late December, Boston is not one of them. Could you imagine an SMU Mustangs and Miami Hurricanes matchup in the Clam Chowder Bowl that forces players and fans that live in Texas and Florida to make that trip? It would be like the Jamaican Bobsled Team showing up to Canada for the Winter Olympics in Cool Runnings (amazing movie, by the way).

And just for good measure for fellow media members: Most of these ballparks have open-aired press boxes. Good luck writing on deadline in gloves.

The last strike is a combination of both one and two. An amazing bowl experience extends much further beyond the game itself. It?s about the pep rally, the last tailgate of the season, and all of that extra curricular stuff that shows your have pride for your school. A mediocre seat and potential horrible weather for an outside football game makes for likely a very low-attended affair.

That lucky UCF jersey you?ve worn all season? It will be covered with a giant coat. Your favorite Clemson sweatshirt? It won?t be enough at Boston?s Fenway Park.

This isn?t the NHL?s Winter Classic. This is college football. And there are a lot of teams and fans who don?t experience that climate enough to want to make the trip.

It?s a fine concept in theory, but when it gets down to it, would you want to watch your average 6-6 team play a miserable game during the winter in New England? Didn?t think so, either.