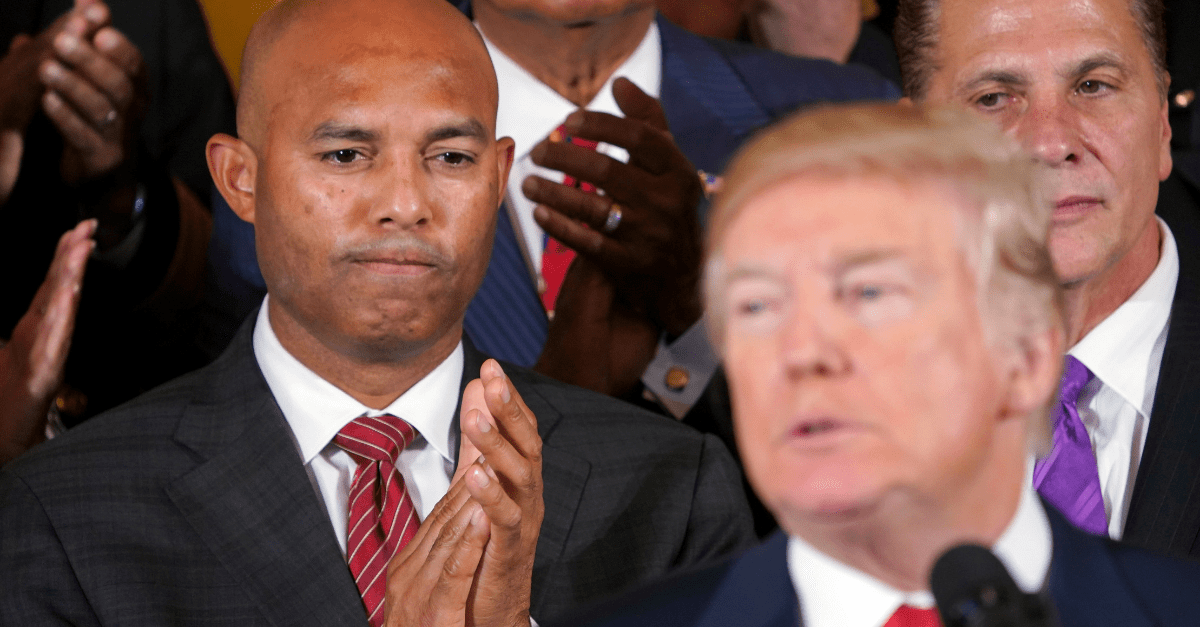 If you and I put together a team of who we thought were the best Major League Baseball players of all time, both squads would look different. One might have Pete Rose, the other could have Mike Trout, but there’s one position that even this guy couldn’t argue. The greatest relief pitcher in the history of baseball is former New York Yankees closer Mariano Rivera.

Baseball’s all-time saves leader (652) was a five-time World Series champion — he was named World Series MVP in 1999 — a 13-time All-Star selection, and, at age 43, was named AL Comeback Player of the Year after collecting 44 saves in his final season. In 2019, Mariano Rivera became the first player unanimously selected to the National Baseball Hall of Fame.

It’s impossible to dispute the greatness of Rivera’s iconic cut fastball as a MLB pitcher, but since his retirement, the Panama City-born hurler has received more negative attention for his political views than ever before.

In an article published by The Daily Beast, author Robert Silverman described the Sandman’s post-baseball legacy like this:

“And over the past three years, [Mariano Rivera has] also served at the pleasure of a racist president, taken part in thinly veiled propaganda on behalf of a far-right government in Israel, and gotten chummy with outright bigots and apocalyptic loons. None of this will be inscribed on his Hall of Fame plaque. It should, even if much of the sports world would very much like to pretend none of it exists.”

Despite never voicing public support for President Donald Trump at any time, Rivera has made several political appearances alongside the president. In 2018, Rivera was nominated for the President’s Council on Sports, Fitness, and Nutrition, and earlier this year, joined the likes of 1982 Heisman Trophy winner Herschel Walker and Olympic volleyball gold medalist Misty May-Treanor at the White House.

After his unanimous Hall-of-Fame selection, President Trump paid homage to Rivera on Twitter saying, “Congratulations to Mariano Rivera on unanimously being elected to the National Baseball Hall of Fame! Not only a great player but a great person. I am thankful for Mariano’s support of the Opioid Drug Abuse Commission and the [President’s Council on Sports, Fitness, and Nutrition.]”

Congratulations to Mariano Rivera on unanimously being elected to the National Baseball Hall of Fame! Not only a great player but a great person. I am thankful for Mariano’s support of the Opioid Drug Abuse Commission and @FitnessGov. #EnterSandman #HOF2019💯 pic.twitter.com/reU1gKWHSQ

The Daily Beast article also goes into detail on Rivera’s political and religious alignment with Israel, and in particular, controversial Prime Minister Benjamin Netanyahu. Rivera, a devout Christian, reportedly traveled to the country multiple times, once joining New York Board of Rabbis executive vice president Joseph Potasnik on a trip to support the Israel Defense Forces. The NYBR named Rivera its “Man of the Year” in 2013.

It’s believed by many Christians that before Christ can return, Jews must rule the Holy Land.

Despite never hearing about any of these very personal attacks, Rivera joined FOX and Friends to clear the air, and even offer support for President Trump.

“Well, I’ll tell you what, Mr. President Trump, to me, he was a friend of mine before he became the president. Now that he’s president, I will turn my back on him? No. I respect him. I respect what he does, and I believe he’s doing the best for the United States of America.”

On the topic of his support for Israel, Rivera leaned on his Christian faith by stating that because “my savior Jesus Christ” was a Jew, “How could I turn my back and say ‘I won’t support Israel?'”

The Hall of Famer added that negative media attention surrounding him wouldn’t change his beliefs.

The former Yankees great is forever enshrined in Cooperstown. But apparently, that’s not enough to keep personal smear attacks away from one baseball’s greatest, and most humble, personalities ever.