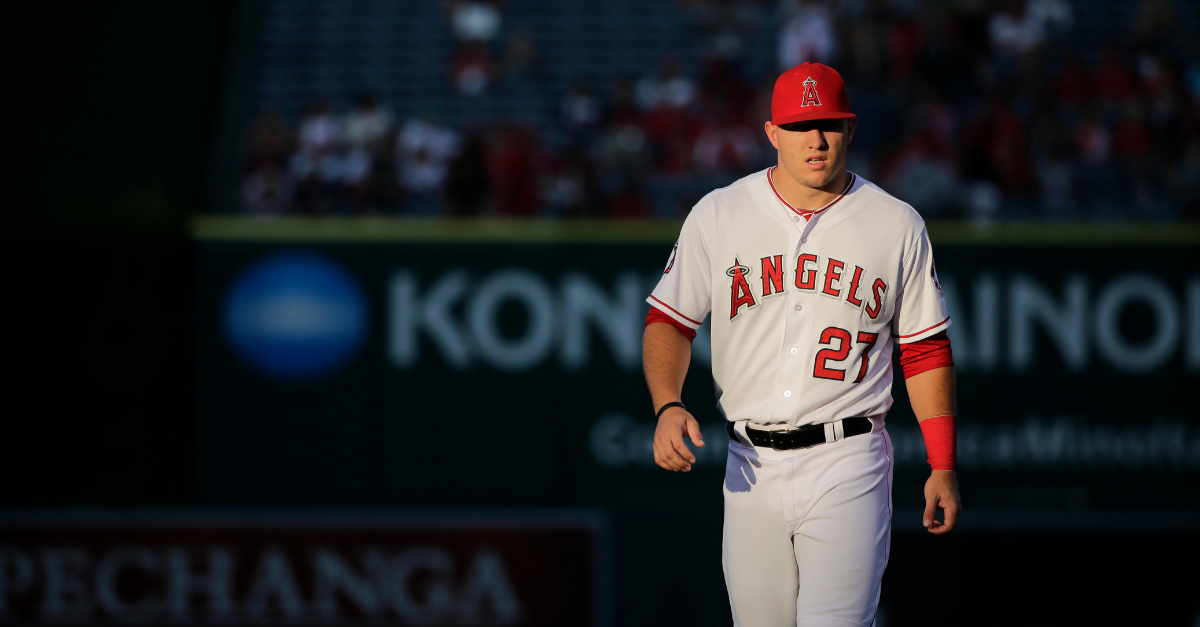 Tom Brady, Michael Jordan, Jack Nicklaus, Serena Williams, Muhammad Ali, Michael Phelps and Usain Bolt all have one thing in common: they’re the G.O.A.Ts of their sports. Some of those names are debatable, but you can’t really go wrong choosing them.

Maybe you noticed I left out a baseball player above. Babe Ruth is probably the obvious choice. Barry Bonds or Pete Rose might be considered if their careers weren’t tainted with scandals. Hank Aaron, Willie Mays and Ken Griffey Jr. are all high on the list as well.

What if none of those are the best player America’s Pastime has ever seen? What if the greatest player to ever play the game is… still playing the game? What if at just 28 years young, this player has cemented himself ahead of Ruth, Bonds and all the other greats despite being decades away from a Hall of Fame acceptance speech in Cooperstown?

You know who I’m talking about: Michael Nelson Trout.

Los Angeles Angels center fielder Mike Trout has been that good to this point in his career. I mean, why else would the Angels sign the two-time Most Valuable Player to a 12-year, $432 million deal that made him the highest paid player in league history?

He’s set to make more money than Alex Rodriguez did with the Seattle Mariners, Texas Rangers and New York Yankees, and yet he’s still a bargain at $36 million per year.

Despite his linebacker size, he also swipes bags with ease. Mike Trout is the real-life version of a create-a-player, and he always looks like he’s playing on the easiest settings.

What’s crazy is Trout was never some other-worldly consensus top prospect coming out of high school, like Griffey, A-Rod or Philadelphia Phillies outfielder Bryce Harper were.

The “Millville Meteor” hails from Vineland, New Jersey, but grew up in nearby Millville, where he was a baseball and basketball star for Millville Senior High School. He played shortstop in honor of his favorite player, Derek Jeter. Trout’s father, Jeff, played for the University of Delaware and played four seasons in the minor leagues after the Minnesota Twins made him a fifth-round draft pick in 1983.

Twenty-four other players were taken ahead of Trout in the 2009 MLB Draft. Teams have probably considered firing scouts for not seeing what the Angels did sooner.

Trout quickly rose through the Angels minor league system and debuted in the majors at just 19 years old in 2011. His first stint, however, was far from Trout-like. In 40 games, he hit .220 with five home runs and four stolen bases.

By age 20, Trout was by far the best all-around player in Major League Baseball. He hit .326, clubbed 30 homers and stole 49 bases. The slugger won American League Rookie of the Year honors in a landslide and finished second in AL MVP voting behind Detroit Tigers first baseman Miguel Cabrera, who won the Triple Crown that year.

He cranked his first walk-off home run in 2014 against the Tampa Bay Rays, the first of three career walk-off bombs. So far.

How Many MVPs Does Mike Trout Have?

The truth is, Trout could’ve just as easily won the award seven-straight times.

Trout has played in more than 1,100 games. As ESPN notes, he’s hit more home runs than Barry Bonds or Hank Aaron, stole more bases than Alex Rodriguez and has a higher OPS (on-base percentage plus slugging percentage) than Willie Mays through their first 1,000 games.

WAR, or Wins Above Replacement, is the standard metric to gauge how good a player is. It basically calculates how much better a player is compared to a replacement level player. Offense, defense and base-running are all factored in.

A single-season WAR greater than 8.0 is considered exceptional and MVP-worthy. Trout has had six of those seasons. Above 5.0 is All-Star worthy, from 2-5 is starter-worthy and anything from 0-2 is reserve/bench worthy.

Well, WAR loves Trout because he excels at everything. He might not lead the league in every category. For example, he might not hit more home runs than Christian Yelich or score more runs than Cody Bellinger this year, but he has a chance to. And in the home run-or-strikeout mentality era, Trout has maintained a relatively low strikeout rate.

Here’s a list of some notable Hall-of-Famers with less career WAR than Trout, who is just 28 right now but has totaled over 70 WAR, per Baseball Reference. He’s already ahead of more than 100 HOF members.

The closest current players younger than 30 in terms of WAR, as of the 2018 season, were former MVPs Giancarlo Stanton (39.7 WAR) and Mookie Betts (38.3). You could combine Chicago Cubs first baseman Anthony Rizzo (31.0) and Colorado Rockies third baseman Nolan Arenado’s (36.1) career WARs, and Trout’s was still higher.

Trout accumulated about the same career WAR as the aforementioned Cabrera (you know, the .316 lifetime hitter with 2,700 hits and 460 homers to his name) in half the at-bats. Half!

As for Trout’s career projections? Trout has averaged more than nine WAR per season. It’s not crazy to expect more of those and maybe another 90 WAR if he stays on the field until he’s 40 or so, which seems likely considering he hasn’t any serious injury concerns. That would also put him right around Ruth and Bonds.

Fangraphs tells us that players typically peak around age 27 and slowly decline through their 30s. A prime example is Trout’s teammate, Albert Pujols. He’ll go down as one of the best hitters ever. After his age-29 season, his performance went downhill quickly while on the Angels.

Deviations from that exist, obviously. Bonds hit 500 home runs after turning 30, including a single-season record 73 as a 36-year-old. Ruth hit 60 as a 32-year-old and hit more than 400 long balls in his thirties.

Trout could follow in the same footsteps. If it’s any indication, his numbers have somehow progressed each year.

No big deal. Just Mike Trout, already the best player in the sport, casually raising his OBP and OPS each of the last six seasons. pic.twitter.com/XIusFMPsel

The Great Bambino might forever be the GOAT, though, because he was a stud hitter and pitcher. A starter for the Red Sox before they sold him to the Yankees, he won 94 games and boated an ERA of 2.28. Trout’s two-way star teammate, Shohei Ohtani, is more likely to hit those marks.

Ruth also essentially saved baseball after the 1919 Black Sox fixed the World Series and nearly damaged the sport’s reputation for good. He was larger than life, a celebrity celebrated across the United States for his never-before-seen-talent. He even had a freakin’ candy bar named after him.

If rings matter like they do to Michael Jordan advocates, Ruth will hold the postseason edge over Trout. He appeared in 10 World Series and won seven of them. Trout’s Angels have only made the playoffs once since his debut, when they lost in the 2014 ALDS to the Kansas City Royals.

Baseball fans know what really matters are numbers. We don’t know what Trout’s future holds in store. We do know he’s under contract until his age-38 season. Let’s say he plays until he’s 40 like Ruth did.

Where to pitch Mike Trout with the bases loaded: Not there.pic.twitter.com/2adSG9T4Ti

Final verdict: Trout’s not the GOAT, at least not yet. Ruth still holds that title. The Sultan of Swat changed baseball forever. He hit 50 home runs when hitting 20 was thought of as elite.

Context is important, too. Would Ruth be a Hall-of-Famer against today’s pitching? I’d argue no. Yankees reliever Adam Ottavino said he could strike out the King of Crash with ease, and he’s probably right. Today, pitchers are throwing harder than ever. There are setup pitchers and closers and lefty specialists. In Ruth’s era, guys threw all nine innings. Plus, Ruth was a known heavy drinker and consumer of hot dogs.

You think Trout is eating, drinking or smoking the way Babe did? No chance.

The greatest players of all time are the ones that make you gasp. One peek at the back of their baseball card is gawk-worthy. They set themselves apart from everyone else. They’re different breeds. Head on over to Trout’s Baseball Reference page and try to keep your jaw attached to your face.

Trout already set an MLB record for most WAR through his age-26 season and he’s on pace for another 10 WAR in 2019. He could retire today and waltz into the National Baseball Hall of Fame. He’s by far the best player in California/Anaheim/Los Angeles Angels history. If he stays on this path, he probably overtakes Ruth, Bonds and everyone else.

So enjoy him while you can, because players of his caliber don’t come around often.

This post was originally published June 27, 2019. It was updated following the 2019 MLB season.

READ MORE: Will Vladimir Guerrero Jr. Be Better Than His Hall-of-Fame Father?