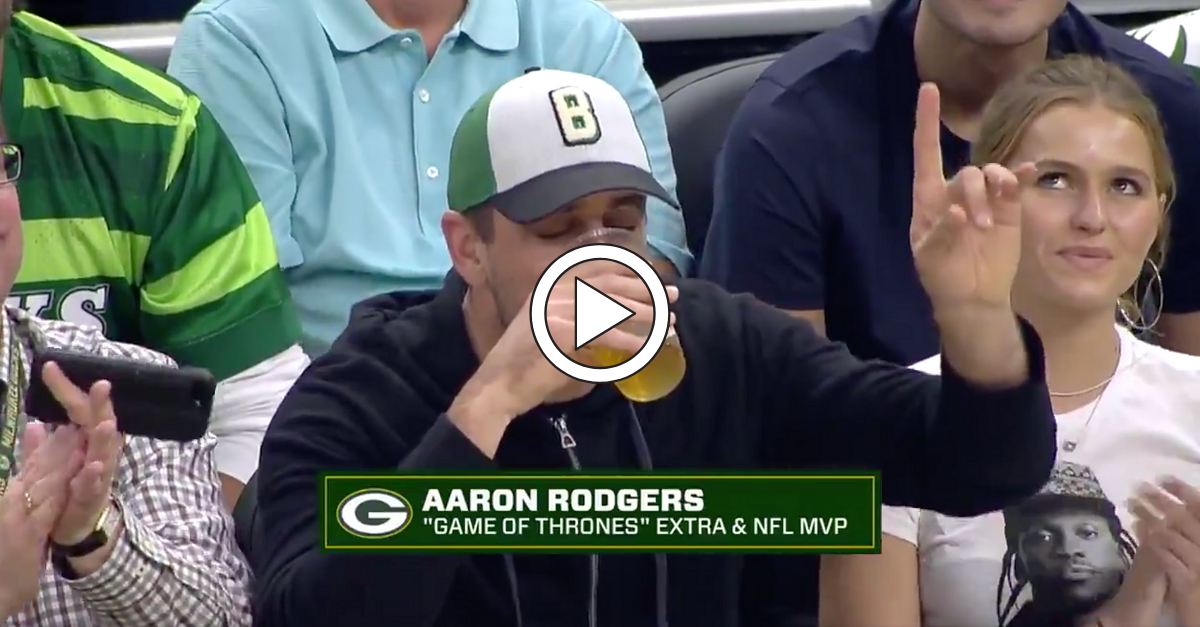 Have you ever chugged a beer? If you answered no, well, I’m not exactly sure what you do for fun. But for everyone else who have had our legs hoisted into the air while a bunch of college-aged kids chanted “CHUG! CHUG! CHUG!” during a keg stand (and subsequently woke up the next morning fully-clothed with an empty pizza box on the table), beer chugging is an art form that we can’t help but admire.

In the NFL, where professional athletes arrive after spending years on a college campus, there are beer chugging champions everywhere you look. But during Game 5 of the Eastern Conference Finals between the Milwaukee Bucks and Toronto Raptors, Wisconsin’s biggest superstars were thrust into the spotlight, beers in hand, to show off their skills.

First, it was Green Bay Packers offensive lineman David Bakhtiari. The left tackle, who ranked No. 91 on the Top 100 NFL Players of 2018 by his peers, was already well-known as a beer chugger for what he did earlier in the year. He was back again, chugging two beers back-to-back like a damn champion.

Then, Bakhtiari pointed across the court where Packers quarterback Aaron Rodgers sat. The former California Golden Bear must not have visited many frat parties out on the West Coast because No. 12 couldn’t even finish half of a beer in an absolutely terrible showing.

How does Bakhtiari respond? By, of course, chugging his third beer in about a minute.

What a crying shame the “Game of Thrones extra and NFL MVP” couldn’t have his moment in the sun. But, that didn’t stop several other athletes from showing up Rodgers before Thursday night was over.

Reigning National League MVP and Milwaukee Brewers slugger Christian Yelich stepped up to the plate to chug a beer while the Wisconsin faithful cheered him on.

Needless to say, Rodgers wasn’t impressed that he was outshined.

To make matters worse, Rodgers’ enemy in the NFC North division, Detroit Lions quarterback Matthew Stafford, decided to get in on the action during his own night out while watching the Raptors-Bucks game.

Kelly Stafford, who is the All-Pro quarterback’s wife, caught her husband putting down a tall glass faster than almost anyone else did.

Just to make sure you know that Rodgers is in competition for “Worst Beer Chugger in the NFL,” here’s a recent video of New England Patriots quarterback Tom Brady on The Late Show with Stephen Colbert putting down a beer

“I was a pretty good beer chugger back in the day,” the G.O.A.T. said.

Everyone at the University of Michigan should be swooning with pride after watching this.

Toronto won that NBA playoff game on the back of 35 points from Kawhi Leonard to take a 3-2 series lead back home, but who really gives a damn when there’s a beer-chugging competition taking place right on the floor of the Fiserv Forum?

Aaron Rodgers is enjoying the offseason, but he’s surely not in great drinking shape. Then again, maybe beer just doesn’t do it for the seven-time Pro Bowl selection. Rodgers, it seems, is more of a liquor guy and voted it be scotch next time.

This article was originally published May 24, 2019.