You see, with a franchise as iconic as the Yankees, jersey numbers come at a premium. An incoming Yankee wants to wear a number between one and 10? Take a hike. Fifteen, 16, 20, 21, 23, or 32? Forget about it. More than a few players have had decent careers wearing pinstripes, and to honor them, the Bronx Bombers retired the aforementioned jersey numbers--along with six others--for good. All in all, 22 numbers are off limits, and the players who wore them are honored in Monument Park in center field of Yankee Stadium.

Babe Ruth, Lou Gehrig, Derek Jeter, Mariano Rivera, Mickey Mantle, and Joe DiMaggio are some of the under the radar players who hold the distinction of never having their number be worn again. Seeing those names together got me thinking: Maybe a lineup made up of Yankee players who have had their numbers retired would be decent. Maybe, hypothetically, it's the greatest lineup in Major League Baseball history.

I'll leave that for you to decide, but I'm putting on my manager cap, emulating No. 6 Joe Torre, and making the lineup card for the New York Yankees retired number team. 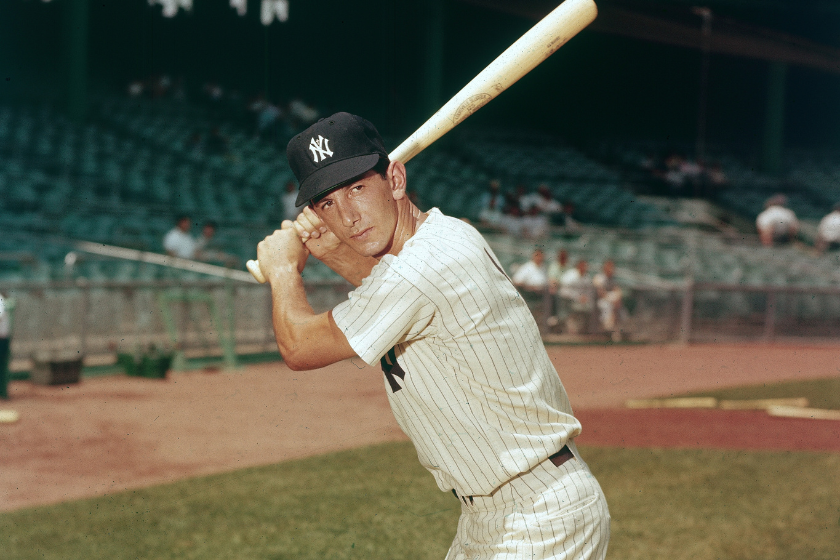 You could probably finagle a Yankee lineup of just the single-digit numbers -- which are all retired -- and call it good. That being said, who better to kick it off then No. 1 Billy Martin?

Martin had to claw his way to the majors, but once he made it, he became a fan favorite. He hit .257 for his career, made one All-Star team and won four World Series titles in his seven-year career in the Bronx. His most famous moment as a player was a game-saving catch on a fly ball hit by Jackie Robinson in Game 7 of the '52 World Series. New York would beat their crosstown rival Brooklyn Dodgers 4-2 to repeat as champions.

Martin was solid as a player, but he spent a lot of his time absorbing the knowledge of legendary skipper Casey Stengel. So, it was the logical next step when he become a manager after his playing career. He managed the Minnesota Twins, Texas Rangers, and Oakland A's, and had two stints leading the Yankees. His first stint in New York included guiding the Yanks to a 100-62 regular season record in 1977 and winning the World Series -- the same World Series Reggie Jackson became "Mr. October." 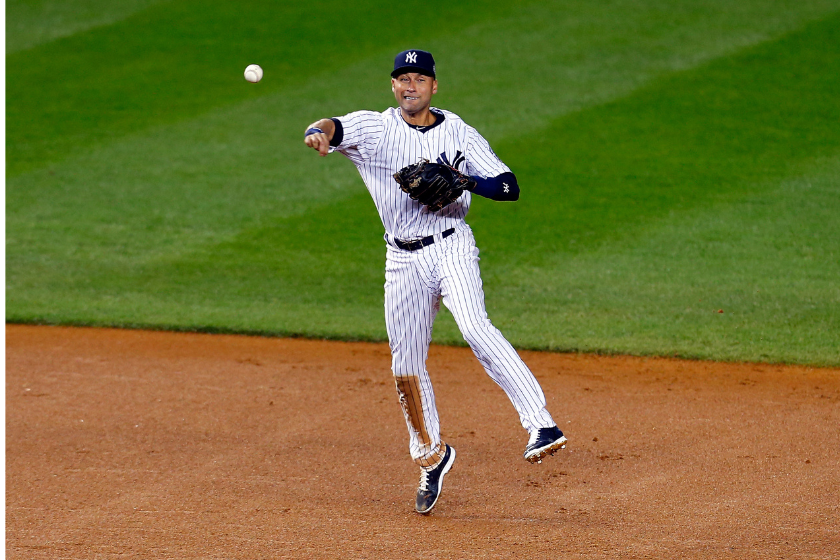 "The Captain" is the greatest Yankee of my lifetime. Five World Series rings, 14 All-Star appearances, five Gold Gloves, five Silver Sluggers, Hall of Fame inductee -- you get the picture. Sure, there is another option we could put at shortstop (we'll get to him later), but Jeter was a no brainer.

He's one of the most beloved Yankees to ever wear the pinstripes. Enough said. 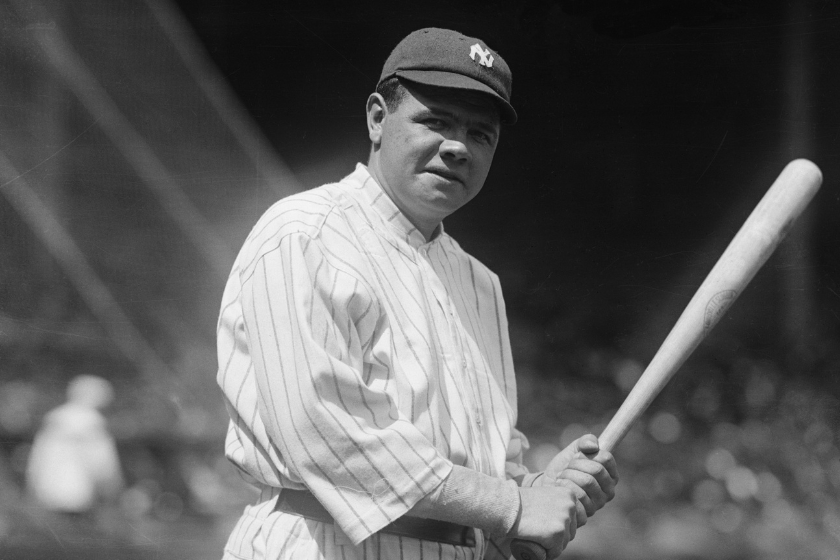 "The Great Bambino" is arguably the most iconic baseball player ever. He won seven World Series titles, led the American League in home runs and RBIs a combined 17 times, hit .342 over his career and had the most career home runs (714) in MLB history until Hank Aaron passed him.

"The Sultan of Swat", "The Colossus of Clout", "The King of Crash" -- call the Babe whatever you want, but there's no doubt who I want playing right field and hitting third in my lineup. 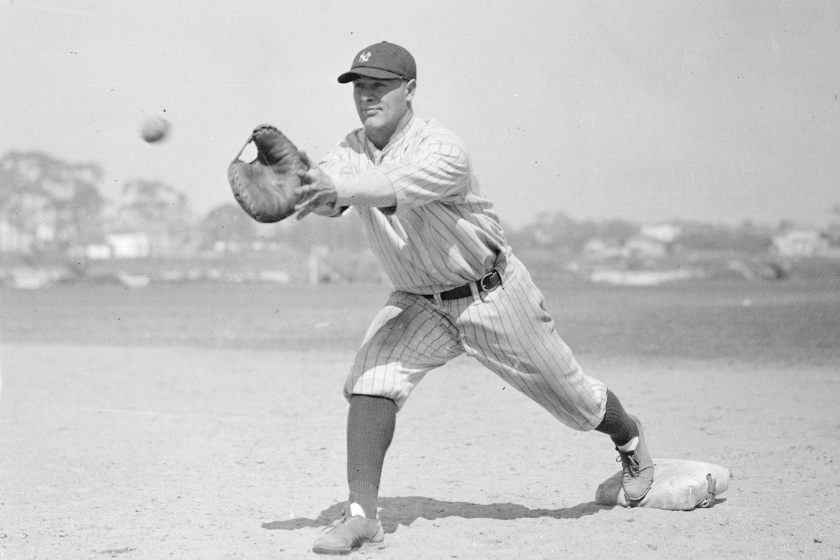 Gehrig is rightfully most famous for his "Luckiest man on the face of the Earth" speech, but his skills with a bat made him a legend on the diamond. He hit .340 for his career, had a .667 slugging percentage and .447 on base percentage, led the AL in home runs and RBIs a combined eight times, and won the AL batting title and Triple Crown in 1934. Oh, he was also a two-time AL MVP, seven-time All-Star and a six-time World Series champ.

On top of it all, Gehrig was as durable as anyone and payed an insane 2,130 consecutive games. He's undoubtedly one of the best to ever do it, and his No. 4 was the first number to be retired by a MLB team. 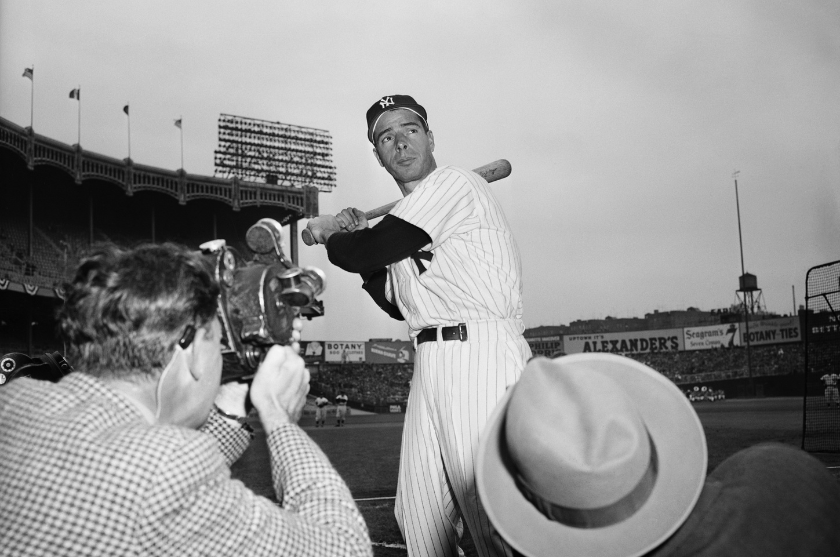 DiMaggio has as decorated a baseball resume as you'll ever see: 13 All-Star appearances, nine World Series titles, three American League MVPs, two AL batting titles -- those are all in addition to his 56-game hitting streak that has stood for over 80 years. I don't see it being broken anytime soon, either.

"The Yankee Clipper" could do it all on the diamond, including playing a mean center field. However, I'm moving DiMaggio to right in favor of the next guy in the lineup. 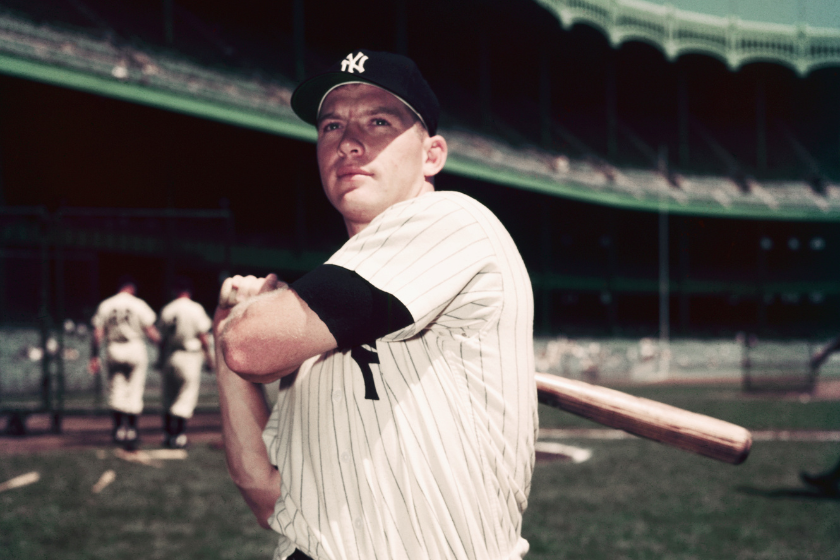 The reason Mickey Mantle is in center instead of DiMaggio is because of his ridiculous .984 career fielding percentage, but "the Mick" is also the godfather of switch hitting. While a lot of switch hitters aren't usually power guys, Mantle could crank it from both sides of the plate. He led the American League in home runs four times, won the AL batting title and Triple Crown in 1956 and hit some of the longest home runs in Major League history. 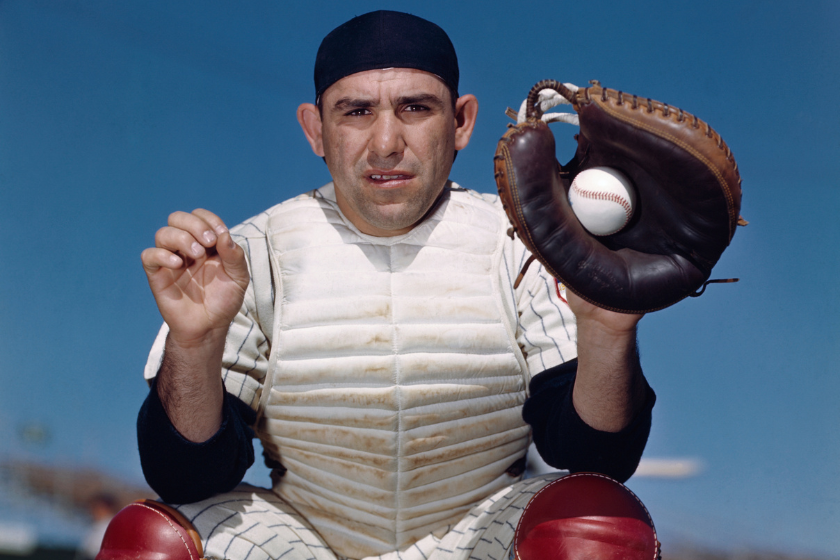 Yogi Berra was a winner through and through -- his 13 World Series championships as a player and coach speak for themselves -- but he was an easy choice because he would keep the guys loose in the dugout. Just let Yogi talk and he'll make his teammates laugh while they simultaneously ask themselves what the hell he just said. What I would do to hear what he chirped to batters when he was behind the plate.

Anyway, Berra is everything you want in a catcher. He rarely let a ball get by him and had great chemistry with the pitching staff. At the plate, he could hit any pitch from his eyes to his toes. Opposing pitchers hated seeing him step into the box in the last few innings due to his clutch gene, too.

Berra also managed the Yankees two separate stints and was on the coaching staff for the team's World Series wins in 1977 and 1978. He also won a World Series coaching the New York Mets in 1969. 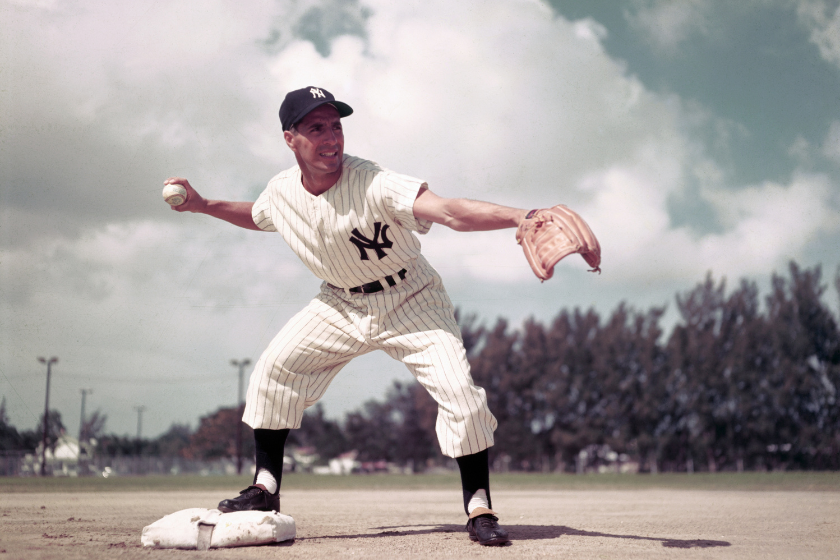 Rizzuto played shortstop during his 13-year career with the Yankees, but I'm moving him to third base because of versatility. "The Scooter" had as solid a glove as anyone and epitomized "small ball". He hit for contact, he bunted, and he led the league in sacrifice hits four times. He's the kind of guy who would do whatever it took to help his team win. So, it's not surprising he has multiple World Series titles (five to be exact) like his fellow Bronx Bombers in the lineup. 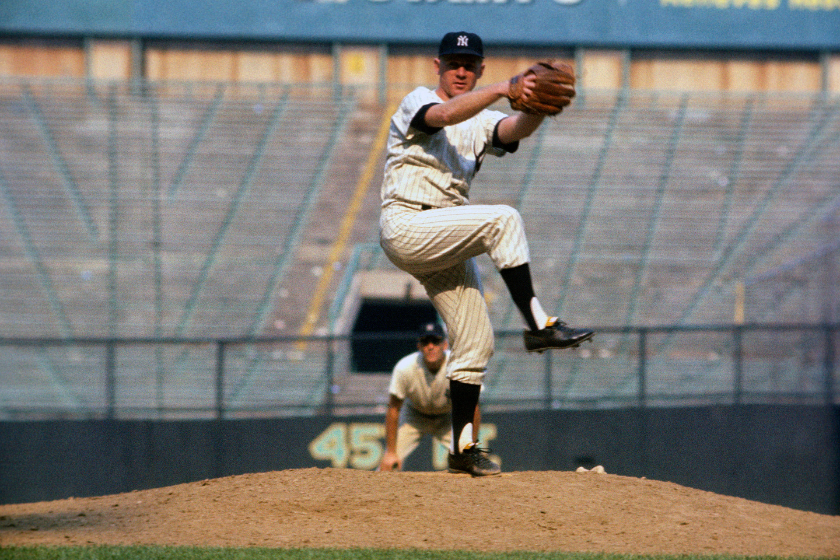 The franchise leader in wins (236), shutouts (45), innings pitched (3,170.1) and games started (438; tied with Andy Pettite), it's only right Whitey Ford gets the nod on the mound. Ford was an All-Star 10 times and won six World Series rings, but his best season was in 1961. That year, he led the American League in wins, won the Cy Young Award and was named World Series MVP en route to a series win over the Cincinnati Reds.

You want your starting pitcher to have excellent control and composure. Few were better than Whitey Ford. 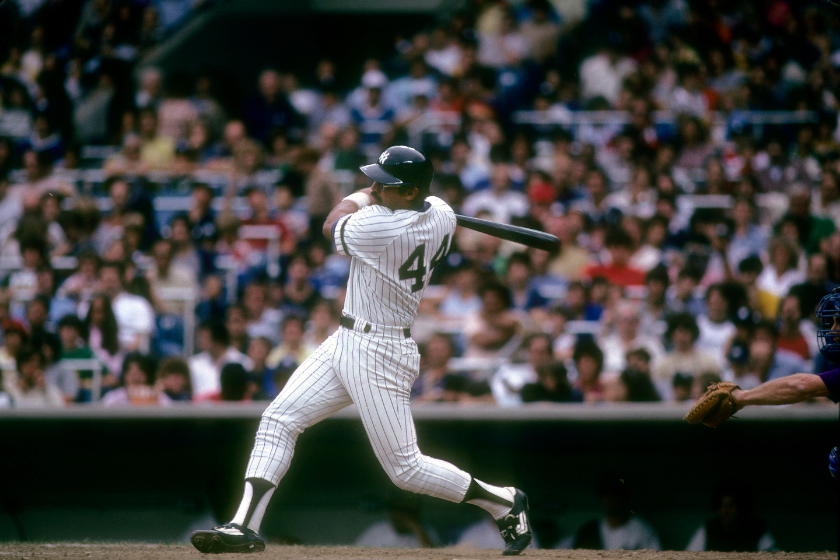 There aren't many better players to round out the lineup than "Mr. October" himself. Of course, Jackson is famous for his three home-run outing against the Los Angeles Dodgers in Game 6 of the 1977 World Series. However, his career outside of that night wasn't too shabby either.

A lethal power hitter, Jackson hit 563 career home runs (14th all time) and led the American League in homers four times. His bat also played a huge part in his team winning, as he was only a part of two losing teams during his 21-year career. When he hung up his spikes, he had 14 All-Star appearances, five World Series titles (two with the Yankees), an American League MVP award and two World Series MVP awards to his name. Not bad.

MORE: The Los Angeles Lakers All-Time Starting 5 is a Who's Who of NBA Legends