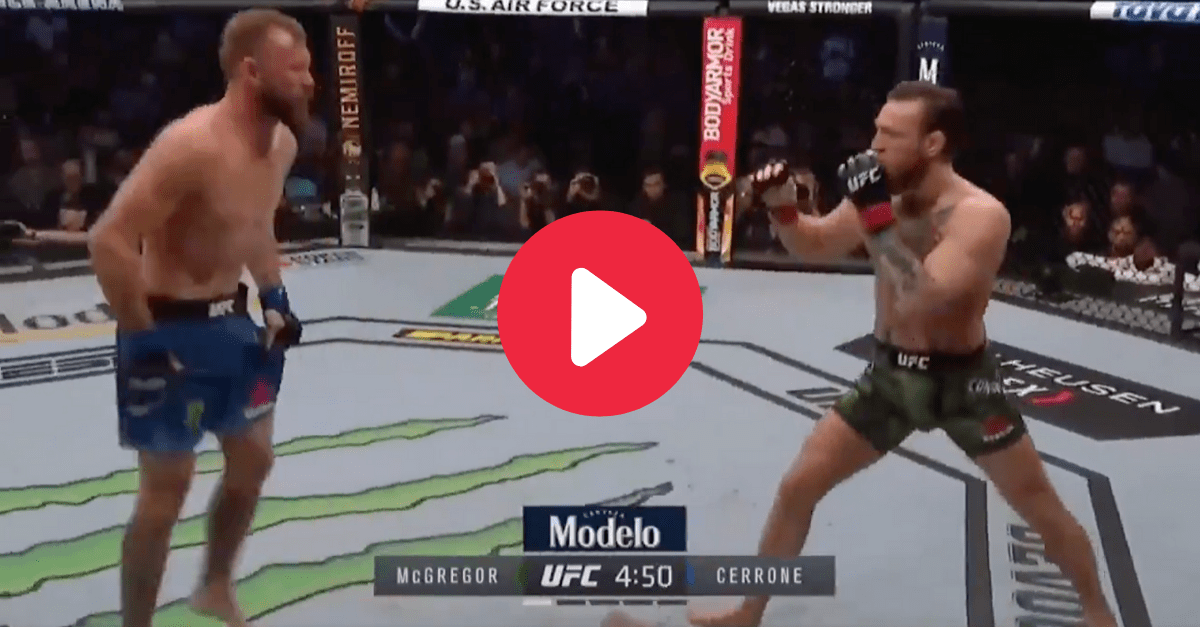 LAS VEGAS (AP) ? Conor McGregor’s opening flurry ? a punch that missed, followed by shoulder and elbow shots to the face ? bloodied Donald Cerrone’s nose. He then floored Cerrone only 20 seconds into the bout with a perfectly placed kick to the head, and he mercilessly finished on the ground.

When he paraded around the ring with an Irish flag on his shoulders to celebrate, the mixed martial arts world knew McGregor is back with a big bang.

The Irish former two-division champion came out of a three-year stretch of relative inactivity and outside-the-cage troubles with a welterweight performance in UFC 246 on Saturday night that echoed his greatest fights during his unparalleled rise.

?I feel really good, and I came out of here unscathed,” McGregor said. “I’m in shape. We’ve got work to do to get back to where I was.?

After hurting Cerrone (36-14) with his first punch, McGregor (22-4) dropped him with a sublime kick to the jaw. McGregor pounced and forced referee Herb Dean to save Cerrone, delighting a sellout crowd of 19,040 at T-Mobile Arena.

What am I going to do with all this 🍿
40 secs & it's over!
This is not what I paid for.
Congrats McGregor #UFC246 pic.twitter.com/TPPalAvuwi

McGregor?s hand hadn?t been raised in victory since November 2016, when he stopped lightweight Eddie Alvarez to become the first fighter in UFC history to hold two championship belts simultaneously. With his fame and fortune multiplying, McGregor fought only his boxing match with Floyd Mayweather in 2017, and he lost a one-sided UFC bout to lightweight champion Khabib Nurmagomedov in late 2018.

?I wasn?t committed,? McGregor said afterward while speaking to reporters with a bottle of his Proper Twelve whiskey on the table before him. ?I just felt like I disrespected the people that believed in me and supported me. That?s what led me to re-center myself and get back to where I was at.?

After a year spent out of competition and in repeated trouble with the law, McGregor got back into training and vowed to return to elite form. This dramatic victory over Cerrone indicated he’s well on his way, and McGregor has vowed to fight multiple times in 2020.

Welterweight champion Kamaru Usman and veteran brawler Jorge Masvidal watched UFC 246 from cageside. Either man could be McGregor’s next opponent, but UFC President Dana White is pushing for a rematch with Nurmagomedov, who first fights Tony Ferguson in April.

?Any one of these mouthy fools can get it,? McGregor yelled into the microphone. ?Every single one of them can get it. It does not matter. I?m back and I?m ready.?

The return is complete.

McGregor also wants to make up for his loss to Nurmagomedov, but he doesn’t want to wait until the champion is ready to fight again in late summer. McGregor wants an earlier fight, and he predicted that the Nurmagomedov-Ferguson fight will be scrapped, as it already has four times during those fighters’ careers.

Cerrone is the winningest fighter in UFC history with 23 victories, a mark that reflects both his durability and commitment to an uncommonly busy schedule. Cerrone, who also holds the UFC record with 16 stoppage wins, had fought a whopping 11 times since McGregor’s win over Alvarez, and he was in the cage for the 15th time since he lost his only UFC title shot in December 2015.

But Cerrone?s last two fights were stopped when he took too much damage, and he couldn’t block McGregor’s decisive kick or recover from the punishment on the ground.

?I’d never seen anything like that,? Cerrone said. ?He busted my nose, it started bleeding, and he stepped back and head-kicked me. Oh, man. This happened this fast??

Although many observers have scoffed, the 31-year-old McGregor believes he can reclaim the fearsome form he showed during his meteoric rise to unprecedented MMA success. He won 15 consecutive fights during a five-year run from low-profile shows in Dublin to the world?s biggest MMA events, stopping five straight elite UFC opponents with punches on the way up.

After his latest victory ended, McGregor peeled away briefly to celebrate, but quickly returned to comfort the disoriented Cerrone. When Cerrone?s grandmother, Jerry, entered the cage after the fight to hug her grandson, McGregor also hugged Jerry and got a kiss on the cheek.

Even after his prolonged absence ? or maybe because of it ? McGregor’s return was a huge seller on pay-per-view, according to White. The UFC said it made more than $11 million in ticket sales at T-Mobile Arena for the fourth-biggest gate total in the promotion’s history.

?This guy is such a huge superstar,? White said. ?I put him up there with (Mike) Tyson, (Sugar Ray) Leonard, all of them. He?s got the biggest pay-per-view in history, and how many of the top 10 does he have? I don?t know. Coming up in his career, he?s been doubted for his talent, and he proves them wrong every time.?

Former bantamweight champion Holly Holm beat Raquel Pennington by unanimous decision in the penultimate bout of UFC 246. The 38-year-old Holm (13-5) had lost five of her seven fights since she memorably knocked out Ronda Rousey in November 2015.

On the undercard, 37-year-old flyweight Roxanne Modafferi pulled off one of the biggest upsets in recent UFC history with a one-sided decision victory over previously unbeaten 21-year-old Maycee Barber, the UFC’s top 125-pound prospect.

Barber (8-1) injured her left knee during the bout, but Modafferi (24-16) was already dominating with the superior jiu-jitsu she has been practicing for Barber’s entire life. Modafferi was the biggest betting underdog on the UFC 246 card, facing 10-to-1 odds at some sports books.

Aleksei Oleinik, a 42-year-old heavyweight who made his pro debut in 1996, also beat Maurice Greene by submission in the second round.