Anthem Protesters Not Suspended by U.S. Olympic Committee, Given Probation 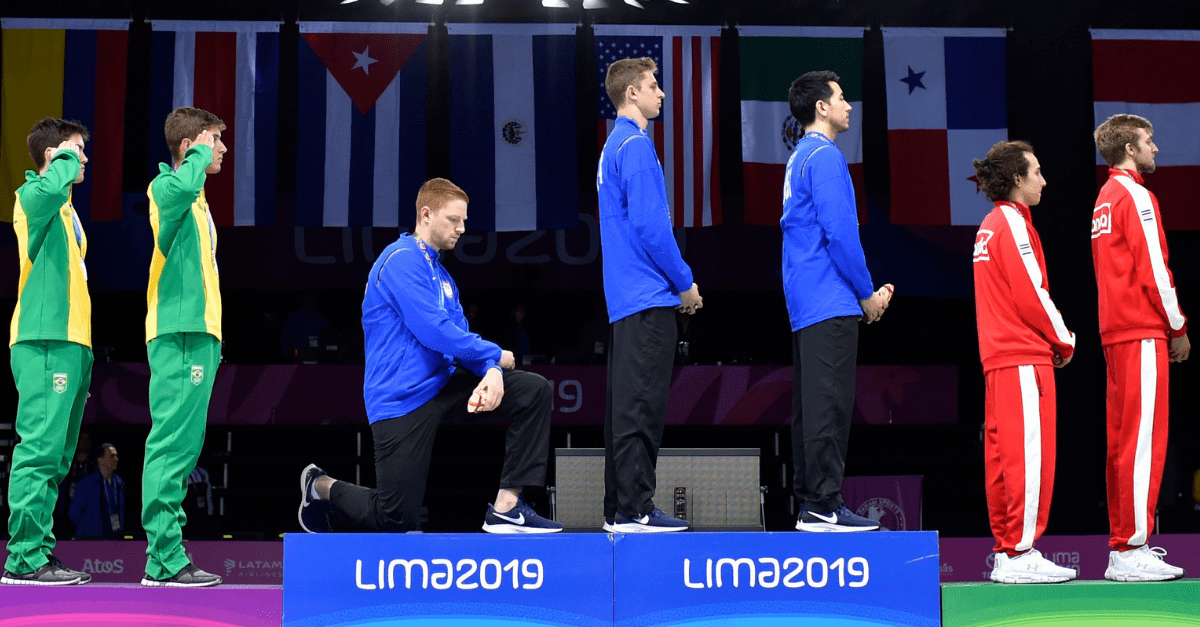 DENVER (AP) ? The letters went to the two protesters. The message was meant for a much wider audience.

The CEO of the U.S. Olympic and Paralympic Committee sent letters of reprimand to hammer thrower Gwen Berry and fencer Race Imboden for protesting on the medals stand last week at the Pan American Games, but the 12-month probations that came with the letters also included a none-too-subtle signal for anyone vying for next year’s Olympics.

“It is also important for me to point out that, going forward, issuing a reprimand to other athletes in a similar instance is insufficient,” Sarah Hirshland wrote in the letters sent Tuesday. The Associated Press obtained copies of the documents.

Neither Berry’s raised fist nor Imboden’s kneel-down on the Pan Am medals stand were met with immediate consequences, in part because they happened at the tail end of the games that were wrapping up in Lima, Peru.

Hirshland’s letter was as clear a sign as possible that athletes who try the same next year in Tokyo could face a different reaction.

It’s the IOC’s role to discipline athletes who break rules that forbid political protest at the Olympics ? much the way the IOC triggered the ouster of John Carlos and Tommie Smith after their iconic protest in 1968 ? though national federations can get into the mix, too. Before going to the Olympics, athletes sign forms stating they’re aware of the rules and won’t break them.

“We recognize that we must more clearly define for Team USA athletes what a breach of these rules will mean in the future,” Hirshland wrote. “Working with the (athletes and national governing body councils), we are committed to more explicitly defining what the consequences will be for members of Team USA who protest at future Games.”

Neither athlete immediately returned messages sent to them by AP via their social media accounts and agents.

"It was a moment for me to speak up." Here's why Olympic fencer @Race_Imboden kneeled during the national anthem at the Pan Am Games. pic.twitter.com/7wXL1LqtXD

Both will be eligible for the Olympics next summer, when the United States will be in the heat of a presidential campaign.

In a tweet sent shortly after his team’s medals ceremony at the Pan Am Games, Imboden said: “Racism, gun control, mistreatment of immigrants, and a president who spreads hate are at the top of a long list” of issues that need to be addressed.

Berry said she was protesting social injustice in America, and that it was “too important to not say something.”

Hirshland said she respected the perspectives of the athletes and would work with the IOC “to engage on a global discussion on these matters.”

“However, we can’t ignore the rules or the reasons they exist,” she wrote.