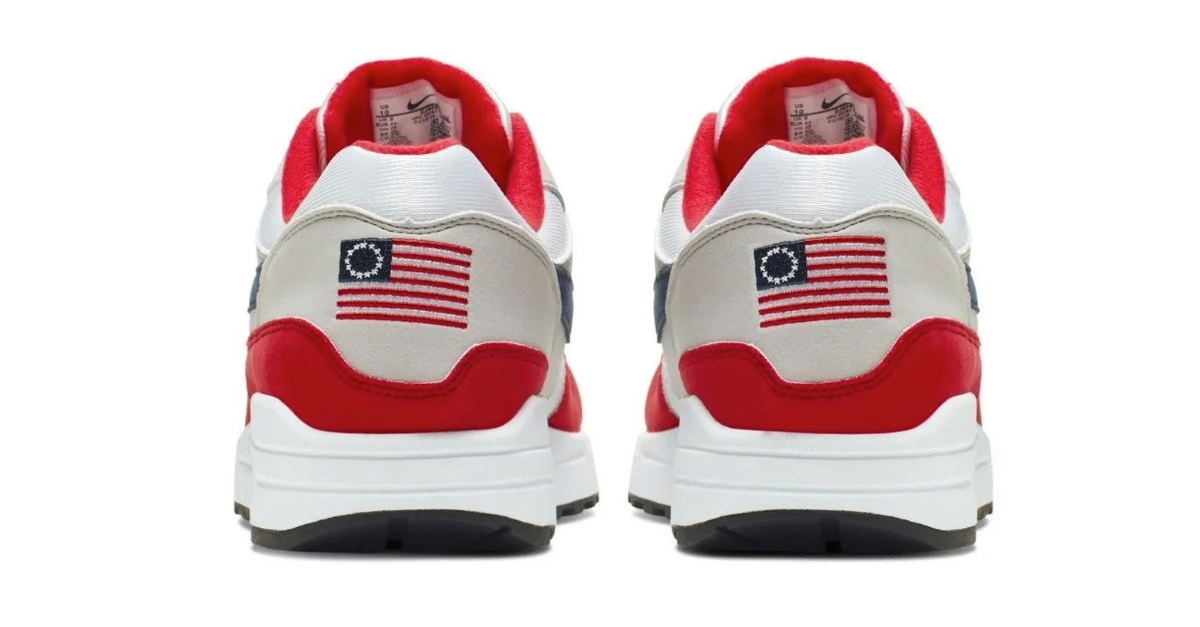 The Fourth of July holiday is as American as it gets. All of us will break out American flag socks, decide which grill is best to cook our meats, and watch as millions of dollars of fireworks go up when the sun comes down. It’s a celebration of our country’s independence. It’s a time to remember not only how far we’ve come, but also how much further we have to go.

This July 4, however, not everyone is so excited to look back as the ever-beautiful United States of America celebrates its 243rd birthday.

Iconic retail company Nike began shipping out its ‘Betsy Ross Flag’ Air Max1 USA shoes, which were meant to go on sale this week. The heel of the shoe featured 13 white stars ? signifying the 13 original colonies ? which were the centerpiece of the first version of our country’s flag created by Betsy Ross during the American Revolution.

According to reporting from the Wall Street Journal (h/t Newsweek), former NFL quarterback Colin Kaepernick contacted the company and told them the shoes “offended him and other people he knew.” The WSJ reports that Kaepernick’s claim was that the flag’s relationship back to an era of slavery was the cause of his complaint.

As a result, Nike recalled the shoes that were already shipped and will not be releasing them for the July 4th holiday.

According to CNBC, the sneakers were originally priced at $120. On the auction platform StockX, shoes that were previously purchased are reportedly being resold for as much $2,500 per pair.

According to @WSJ, Nike will not release its Fourth of July flag-themed shoes after speaking with Colin Kaepernick, who says he and others see the Betsy Ross 13-star flag as an "offensive symbol because of its connection to an era of slavery."https://t.co/8xQFe9Tiw8

“Nike has chosen not to release the Air Max 1 Quick Strike Fourth of July as it featured the old version of the American flag.”

Images of the shoes were removed from Nike’s online store and, as you’d expect, Americans across the country are outraged that the massive retail brand pulled the shoe and the “offensive symbol” of its U.S. flag design. The flag is used by some extremist groups as a symbol for their cause, although it’s not widely used in this way.

Perhaps most notable of all the backlash, Republican Arizona Governor Doug Ducey announced in a tweet on social media that he’s ordered the Arizona Commerce Authority to pull financial incentives meant for Nike to build a plant in his state.

Does THIS Flag offend you too?!

Kaepernick, who hasn’t played an NFL football game since the 2016 season, infamously began kneeling during the playing of the Star-Spangled Banner to protest racial injustice and police brutality in the United States. The original message was lost in translation, and the former San Francisco 49ers quarterback’s national anthem protest became a symbol of anti-American values altogether. This caused a ripple effect, as other athletes and Kaepernick supporters joined him in protesting, and it also kept the NFL quarterback out of a job.

Kaepernick and former teammate Eric Reid reached a settlement with the NFL for less than $10 million after claiming owners colluded against them. Reid now plays for the Carolina Panthers.

Nike aligned the company with the former quarterback last year and made him the face of its 30th anniversary ‘Just Do It’ ad campaign. It’s no surprise that they listened to his qualms with their product, but this latest move could very well hurt the massive retailer more than ever before.

Time will tell how bad it gets as the fallout from pulling the ‘Betsy Ross Flag’ sneakers will spread like wildfire, especially with our country’s Independence Day upon us.