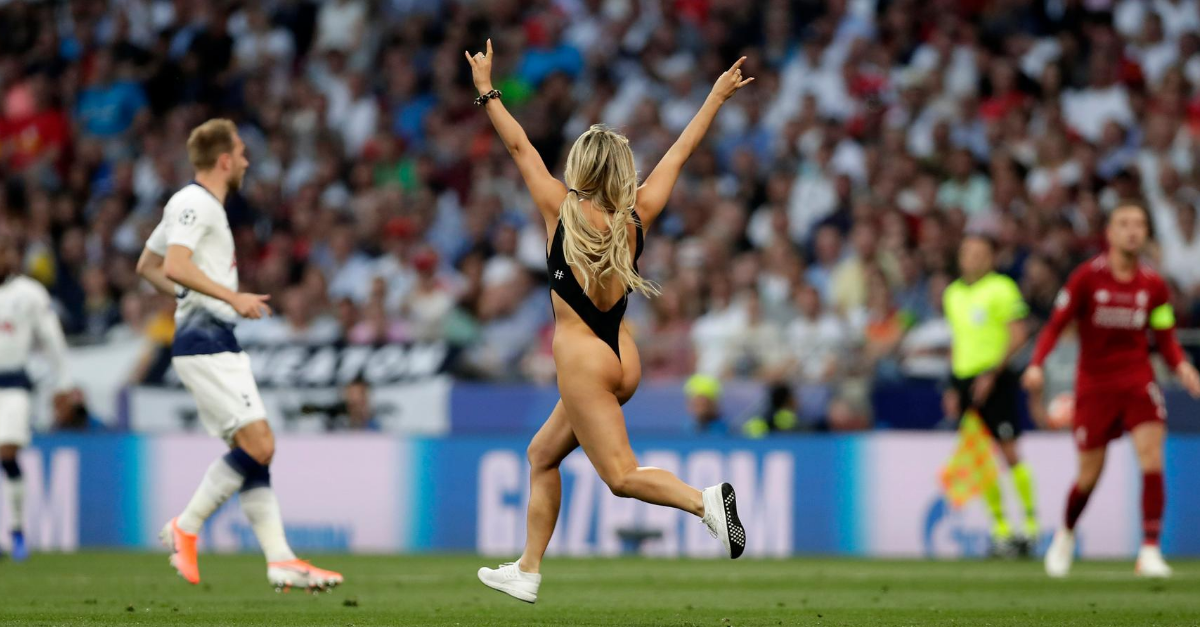 Hitting the field on a dead sprint as 85,000 people erupt at the sight of your naked ass sounds like an adrenaline rush this drag racer couldn’t match. Me, I’d streak in a heartbeat if I wasn’t immediately going to jail with only a poorly-framed cell phone video and hefty fine to show for it.

But when the 2019 Champions League Final streaker joined Premier League clubs Tottenham and Liverpool on the Wanda Metropolitano Stadium grass, she went from an unknown pitch invader to international celebrity overnight.

WARNING: The video below contains some NSFW language.

STREAKING THE CHAMPIONS LEAGUE! Life is for living, do crazy things that you will remember forever 😈

Her name is Kinsey Wolanski. The then-22-year-old American model from Los Angeles appeared in Sports Illustrated and Maxim before that fateful day, so she had some fame. But nothing prepared her for what happened after agreeing to the prank in a challenge from her boyfriend at the time, Vitaly Zdorovetskiy.

“When Vitaly asked me to do it, I honestly had no idea how big a deal the Champions League final was. I had no idea the whole world would be watching me,” Wolanski told The Sun. “But I said yes right away, I just loved the sound of doing something crazy ? you only live once.”

According to The Sun, Wolankski’s Instagram account was temporarily suspended because so many people began following her. (The social media company was working on identifying the account was actually hers.) Wolanski said when she entered a Spanish jail, she had 300,000 Instagram followers.

When she left five hours later, her account had two million followers and counting. You can’t buy that kind of publicity.

Experts estimated the stunt, and the global attention that came with it, could potentially earn Wolanski around $4.7 million.

Wishing you a safe and fun New Years celebration! What are your plans?

About one year later, Wolanski now has over 3.5 million followers on Instagram. Her YouTube channel, which highlights pranks she pulls from dancing on strangers in a bikini to climbing the Pyramids of Giza, has another 89,000 subscribers.

She’s promoted products for various companies, received numerous job offers, and now is part of The Clubhouse, a Beverly Hills location where social media influencers live together and make content to boost their personal brands. As a result, they are making enough money to feed their dream lifestyles for years to come.

Thankful for this house and my roomies during this time ❤️

Wolanski, who played Brittany in the 2019 horror film Slasher Party, believes the fame she garnered from her Champions League stunt will allow her to retire by age 30.

“The fans loved it, the players seemed to love it and even the police at the station were asking for my photograph by the time I got out.

“The response has been unbelievable, I couldn’t be happier. It was the biggest thrill of my life.”

? Kinsey Wolanski, via The Sun

Wolanski added that after her pitch invasion, she had a couple of the Liverpool players on the pitch that day “send me flirty messages” and “heart emojis” on social media.

The now 23-year-old separated from Vitaly after the stunt, but both parties made huge strides socially as a result. Vitaly is an infamous YouTuber and prankster who’s invaded every major event you could imagine, like running on the floor at the 2016 NBA Finals, 2017 World Series and numerous famous landmarks around the world. His YouTube channel, VitalyzdTv, has over 10 million subscribers and his Vitaly Uncensored pay-site offers even more NSFW videos.

He’s been arrested more times than I can even begin to explain.

Did I distract #8 a little too much?

Here’s a lesson in streaking: Wolanski was hit with a $17,000 fine for violating the UEFA Champions League’s rules. She received another $10,000 fine on top of that for the “free advertising” on her swimsuit.

Streaking is illegal (Seriously, don’t do it), but multi-million dollar exposure and a few hours in jail? Not a bad day at the office for the now-famous pranksters.

Liverpool captured the title by beating Tottenham Hotspur, 2-0. I bet you were too distracted to notice.

This article was originally published April 28, 2020.