Fifteen years went by before Mike Tyson fought another man in a boxing ring. In November 2020 during the coronavirus pandemic, the 54-year-old all-time legend faced off against Roy Jones Jr. in Los Angeles, California in what was must-see TV for boxing fans of all ages.

Iron Mike has been a polarizing figure in the sports world for as far back as many can remember. The former heavyweight boxing champion and Brooklyn, New York native famously bit Evander Holyfield's ear in 1997, once told Lennox Lewis he wanted to eat his children and has allegedly fought a great deal outside of the ring.

The Tyson stories are endless. Smoking $40,000 of weed every month at his ranch? Yep. Catching his first wife hooking up with Brad Pitt? Oh yeah. Kid Dynamite's personal life isn't exactly all anecdotes you'd tell your buddies while hanging out at the bar. It's been rife with violence allegations and even a rape conviction in 1992.

The most tragic detail in Tyson's movie-like life, however, is the story of his 4-year-old daughter's death. 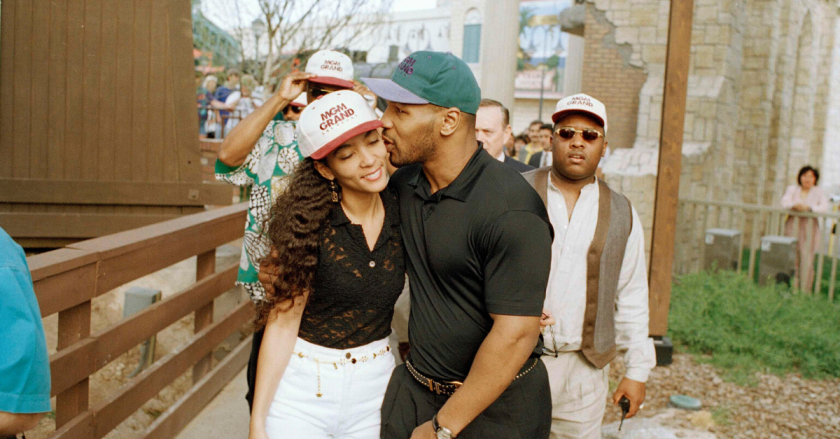 Tyson has been married three times.

He spent one year married to Robin Givens from 1988-89 and told the wild story of catching her with Brad Pitt, if you want to believe him. She told ABC's Barbara Walters in 1996 that being his wife was "torture" and "pure hell."

Tyson got hitched to pediatrician Monica Turner from 1997-2003. She filed for divorce from the former heavyweight champion after alleging he committed adultery on numerous occasions, according to the Washington Post. Turner then walked away with millions of dollars.

In 2009, Tyson put a ring on girlfriend Lakiha Spicer's hand and is still married to her in 2021. 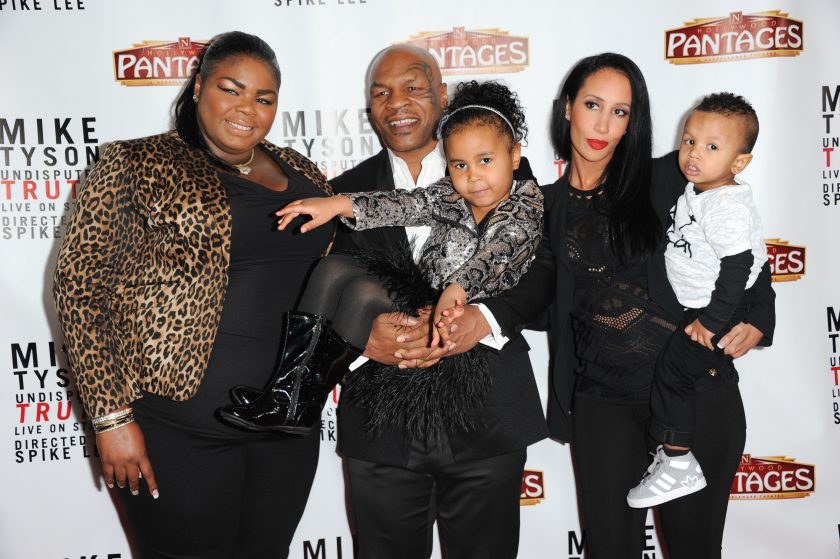 RELATED: Mike Tyson's Net Worth: How The Champ Made (And Lost) Big Bucks

"The Baddest Man on the Planet" has fathered seven biological children, plus he considers another one his own.

Tyson had two children with Monica Turner: Amir and Rayna. He thinks of her oldest daughter, Gena, as his own. Rayna is an actress looking for Hollywood success like her father. Amir played college baseball at American University and is the CEO of Debonair Attire.

The boxing legend had Milan and Morocco Tyson with Spicer. The 14-year-old Milan has taken to tennis while Morocco is 10.

Tyson had his oldest daughter -- Mikey Lorna Tyson -- with Kimberly Scarborough. News broke in February 2020 that he was willing to pay a man $10 million to wed his 31-year-old daughter, though he vehemently denied that claim.

Tyson's final two children are Miguel and Exodus Tyson, whom he had with a woman named Sol Xochitl, according to The New York Daily News and The Daily Mail. The 20-year-old Miguel is an aspiring musician and artist. Exodus suffered a tragic accident that led to her death when she was just a toddler. 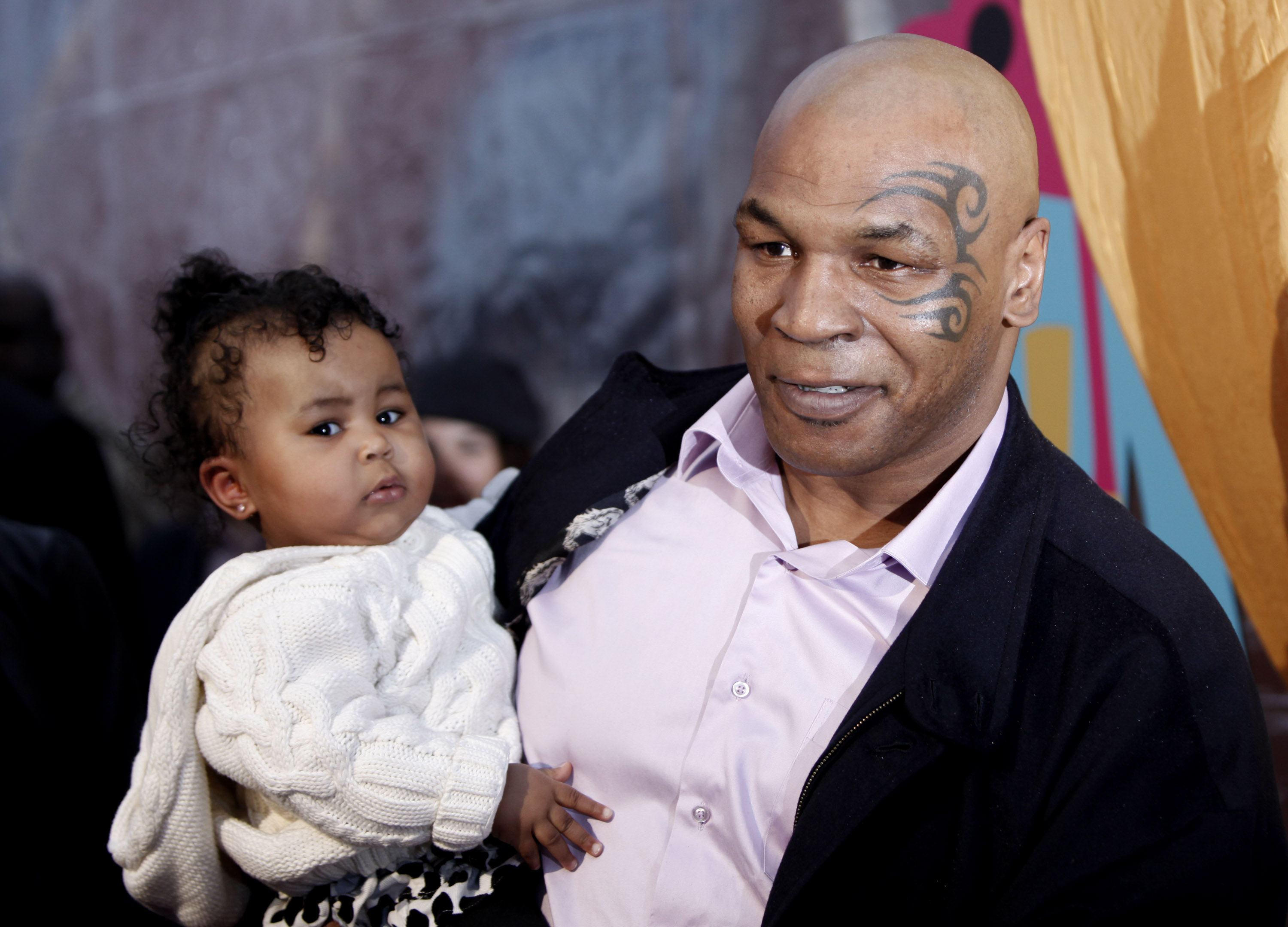 Boxer Mike Tyson and daughter Mila arrive at Spike TV's Video Game Awards on Saturday, Dec. 12, 2009, in Los Angeles. To be clear, this is not the same daughter who died when she was 4. (AP Photo/Matt Sayles)

She was playing on a treadmill in her mother's home in Phoenix, Arizona, when she accidentally hung herself with a treadmill cord that was handing from the exercise machine. Her 7-year-old brother found her and alerted his mother, who called 9-1-1 and began CPR. She was taken to a nearby hospital and placed on life support but was declared dead the day after the tragic accident.

"Somehow, she was playing on this treadmill, and there's a cord that hangs under the console; it's kind of a loop," Phoenix police sgt. Andy Hill told KNXV-TV. "Either she slipped or put her head in the loop, but it acted like a noose, and she was obviously unable to get herself off of it."

Tyson was in Las Vegas at the time but immediately flew to Arizona upon hearing the news of his little girl.

"The Tyson family would like to extend our deepest and most heartfelt thanks for all your prayers and support, and we ask that we be allowed our privacy at this difficult time," Tyson said in a statement at the time. "There are no words to describe the tragic loss of our beloved Exodus."

Mike Tyson Did Cocaine to Cope With Her Death

In one of the most bizarre, tear-filled interviews you'll see of Mike Tyson, he recounted Exodus's death to HBO's "Real Sports."

When HBO's Bernie Godlberg asked if Tyson was a changed man following the loss of his baby girl, he offered a pretty shocking response.

"No, I did some cocaine for a week. I had to get high," he said while choking up. "I couldn't handle it at all."

The interview then abruptly ended by Tyson asking Goldberg to leave. Tyson could then be seen crying.

No, Mike. Even world heavyweight champions are allowed to cry, especially for an incident so devastating and sudden.