When Brooklyn native Mike Tyson stepped into the ring against Hector Mercedes for his first professional bout on March 6, 1985, "The Baddest Man on the Planet" showed no mercy -- Tyson knocked him out less than two minutes into the fight, beginning a run of 19-straight KOs to start his career.

The former heavyweight champion reigned undisputed for two years before infamously losing to James "Buster" Douglas in 1990. He battled Evander Holyfield late in his career and retired in 2000 with a 50-6-2 record that included 44 wins by knockout. He's widely considered the hardest hitter in boxing history and even returned to the boxing ring for the first time in more than 15 years in 2020 to fight Roy Jones Jr.

But controversy was never far away. Even in retirement, Tyson Ranch has become the American Hall-of-Fame boxer's passion with a (no pun intended) budding weed business keeping him busy. In the ring, Tyson was fearless. Outside of it, Tyson's family saw what the world champion was really like, both the good and the bad sides.

On this date February 7 in 1988, Mike Tyson and Robin Givens were married. pic.twitter.com/lKK3IrDArp

At the height of his boxing fame, Tyson's first marriage was just as much in the public eye.

Tyson married actress Robin Givens on February 7, 1988. From that point, allegations of spousal abuse and violence engulfed the relationship. Givens, who played Darlene Merriman in the sitcom Head of the Class, told Barbara Walters in a famous September 1988 interview that the marriage was "torture, pure hell, worse than anything I could possibly imagine."

A nasty divorce ensued, including a $125 million defamation suit Givens filed against Tyson, but it ultimately ended with a $10 million settlement awarded to Mike Tyson's wife. She later claimed Tyson never paid her following the divorce.

Tyson revealed in the book Fire and Fear: The Inside Story of Mike Tyson that he once hit Givens with "the best punch I've ever thrown in my entire life."

Following their split, Tyson wrote in another book titled Undisputed Truth that he would "stop by for a booty call" with Givens. One time, however, produced a clash of Hollywood royalty.

In his book, Tyson detailed visiting Givens in the wake of their divorce only to find actor Brad Pitt at her house. Here's how Tyson remembered the account:

"I knocked on the door and there was no one there. That was odd. So I went back to my car, when I spotted Robin pulling up in her nice white BMW convertible. I should have recognized it, I bought the motherfucker. Great, I can still get my quickie in, I thought, but then I spotted the white silhouette with flowing blond hair in the passenger's seat. Shit, it was probably one of her girlfriends from Head of the Class. But I looked closer and saw that it was a dude. Someone she was probably giving head to. They pulled up and got out of the car and I saw that the guy was Brad Pitt. When Brad saw me standing there in front of the house, you had to see the look on his face. He looked like he was ready to receive his last rites. Plus, he looked stoned out of his gourd. Then he went all pre-Matrix on me. 'Dude, don't strike me, don't strike me. We were just going over some lines. She was talking about you the whole time.' ... It was what it was. Brad beat to the punch that day so I went back the next day."

Imagine if something like that happened today. Floyd Mayweather (or, heck, even Jake Paul or Logan Paul) catching The Rock in bed with his woman would be a wild headline.

We just need Pitt's version of the time the heavyweight champ caught him.

After serving three years in prison for the rape of then-18-year-old Desiree Washington, Tyson married Monica Turner on April 19, 1997. in a Muslim ceremony. The pair first met at comedian Eddie Murphy's house back in 1990 and reportedly stayed in touch during his incarceration.

After five years and two children together, Turner, who was in her pediatric residency at Georgetown University Medical Center at the time and became a successful doctor, divorced Tyson and cited adultery that "has neither been forgiven nor condoned."

In an article written by The New York Times, Tyson said that he and his ex-wife are on good terms together, and he even considers himself a father to Turner's daughter Gena. 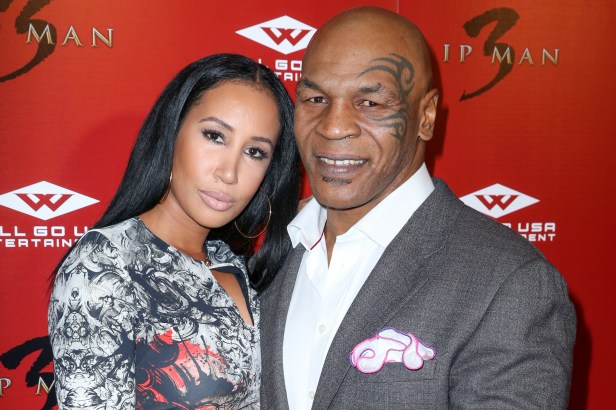 The third time was the charm.

Tyson married Lakiha "Kiki" Spicer in June 2009 and have been together ever since. The couple share two children and have worked in tandem on various projects in Tyson's retirement, including his one-man show on Broadway called "The Undisputed Truth."

Born in Philadelphia, Spicer grew up Muslim alongside brother Azheem Spicer. Their father, Shamsud-din Ali, went to prison for murder in the 1970s, according to the New York Post. Spicer has been to prison as well.

On rapper T.I.'s podcast, ExpediTIously, Tyson revealed that promoter Don King originally warned him to avoid Spencer. Their relationship blossomed, and despite rumors of infidelity early in the relationship, Kiki Spicer turned Tyson into a monogamous and faithful husband late in his life:

"That's why I got married three times, 'cause I can't live without a wife. If I don't have a wife, I'll kill myself. That's real talk. I need somebody to listen to. I'm a soldier. I can't think on my own, I need somebody to do it... I know myself." 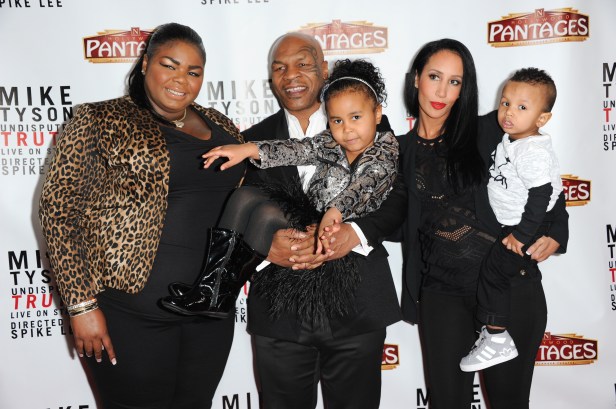 Over the years, Tyson fathered seven biological children with three women. Six of them -- Mikey Lorna, Miguel Leon, Rayna, Amir, Milan, and Morocco -- are alive and well today. His seventh child, Exodus, tragically died at age 4 in May 2009 when she was accidentally strangled by a treadmill cord. Tyson's daughter was pronounced brain-dead at the hospital a few hours later.

Tyson still blames himself for not being there.

Tyson's children were the subject of that same conversation on the ExpediTIously podcast when the former champion boxer stated the following:

"Why my kids don't like black kids? They don't date black kids. Why is that?... Sometimes I look at my daughter, and I see she's attracted to white guys, and I think, 'I didn't set a good example as a black man'... They must have seen sometimes when I was vulnerable and said, 'Hey, I don't wanna be with no one like that. He's scary.'"

Mike and Kiki live half an hour from the Las Vegas strip in a multi-million Nevada home, where they keep their personal life private. While his womanizing days appear to be behind him, Iron Mike isn't afraid to venture into the public eye and stir the pot.

The 54-year-old boxing legend came back and fought Roy Jones Jr. in a massive pay-per-view match during the coronavirus pandemic in November 2020. You can bet the Tyson clan was rooting him on.

This article was originally published May 5, 2020 but has been updated.

MORE: Mike Tyson's Net Worth: How "Iron Mike" Made (And Lost) Big Bucks