There was a time in America when Sundays were for the lanes.

Almost half a century ago, one class of athletes was more famous than the rest. It wasn't Dallas Cowboys or Tennessee Titans who young American athletes turned to for inspiration. Back then, it was the age of the bowler.

The world has changed since the 1970s. Most people would rather watch the NFL Draft or even Champions League than bowling. Bowling has been relegated to the sport of children's birthday parties and Cosmic Pizza nights.

Particularly after 2020, nobody wants to go share finger holes with greasy strangers.

Bowling's popularity has dropped like a pin in a full-frame. Today, most Americans cannot name even one professional bowler. Well, they may be able to think of one, though they might know him for what he yelled rather than his name.

In 2012, professional bowler Pete Weber brought America's real pastime back to the spotlight for one shining moment. Sure, he played a good game, or whatever. Who cares? Everybody's favorite part is when Weber screams at a fan and claims to be God.

But I'm getting ahead of myself. Let's rewind and re-live the career of recently-retired Bowling Hall of Famer Pete Weber and provide some context for that famous day in 2012 when the sports world was introduced to the Gutter God.

Who is Pete Weber? 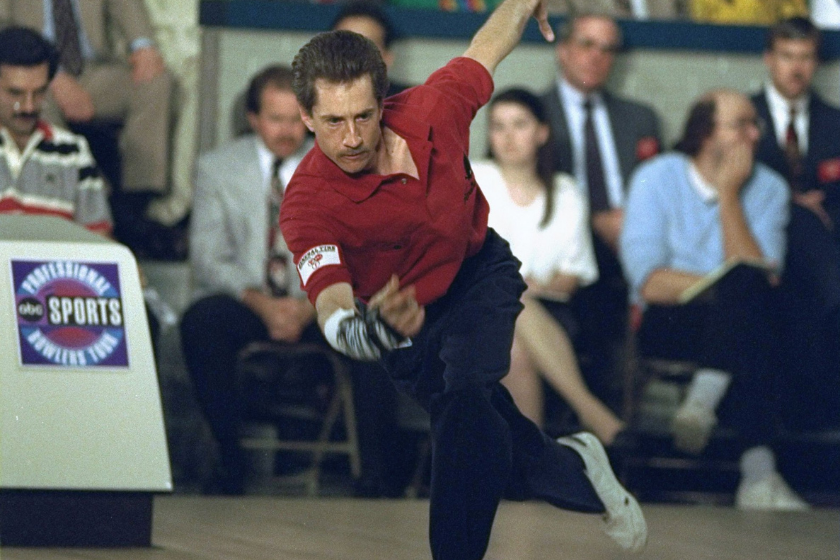 He was born on August 21, 1962, when the "Loco-Motion" by Little Eva was the brand new dance. Weber was born in Missouri where dancing is not allowed.

The Boomer was born the son of Professional Bowlers Association (PBA) founder Richard "Dick" Weber. As such, Young Pete had some big shoes to fill. He took a strong line from the start and soon found himself purchasing bowling shoes rather than renting them. The rest is bowling history.

Weber joined the PBA Tour at the age of 17. The year was 1979 and bowling's popularity was fading while the NFL's was on the rise. Pete rolled into professional bowling when it was no longer producing superstars. But that didn't stop Weber from becoming one.

He began his reign of terror with a PBA Rookie of the Year award in 1980.

By 2012, the alley vet Weber had won eight major titles, including four U.S. Opens. By February 2012, he was going for his fifth US Open title in 25 years.

The "Who Do You Think You Are I Am" Championship 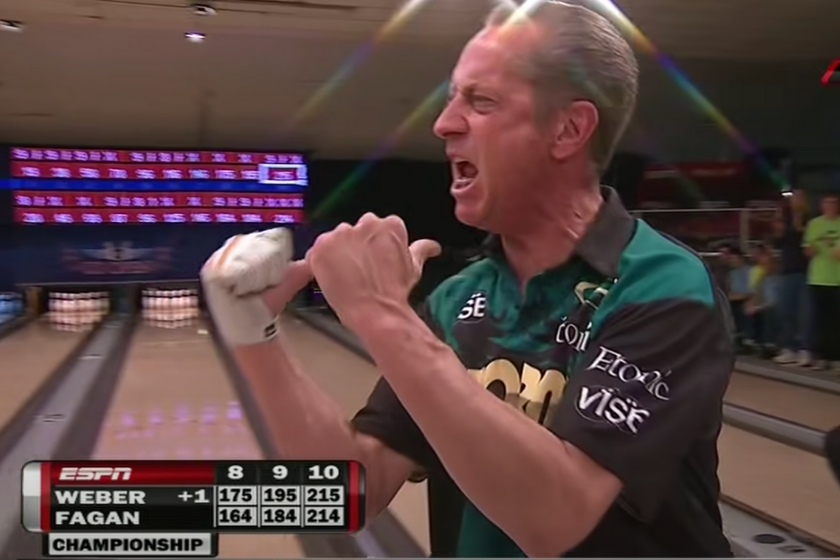 RELATED: This Motivational Speech is Exactly What We Need Right Now

The Maverick from Missouri's fifth U.S. Open title would prove his most famous.

The pressure was on and he knew it. Weber started the tournament in the lowest seed and had pulled off several upsets. It had been an uphill battle to even reach the final. And once he was there, the pressure doubled.

Weber was going for a US Open record fifth title. No other player had done that before, and the current record was four. That record was set by none other than Pete's father Dick Weber.

Professional bowler Mike Fagan stood in the lane over and in the way of Weber's chances. Fagan had been a pro for a decade after striking his way through the NCAA and was about to produce some of the best results of his career.

On Sunday, February 26, 2012, Fagan was only concerned with one result: defeating the loud, rambunctious, and infamous Pete Weber.

The match was tense and tight, like my right shoulder after an evening of bowling. Back and forth the competitors traded pin for pin, strike for strike, and turkey for turkey. Neither side was willing to back down from the action.

Throughout the match, Pete had several one-sided yelling matches with an unidentified fan, something his sponsor Storm Bowling knew was an issue for Weber in the past. Those tensions only ratcheted up the heat in the room. Finally, the steam reached a feverish boil and began to whistle. With a scream and a shout, Weber won the championship by one stroke in the final frame. That, my friends, is when history was made.

The man of this tournament did what every victor must do and gave a thrilling victory speech/taunt/yell. His words became the sports world's most memorable catchphrase.

A brief but thorough point-by-point breakdown of Pete's victory speech:

Wow. I can't define moxie, but PDW's got it.

As I said, the match had been intense, but this speech is bordering on maniacal. Weber is a loud guy prone to wearing his emotions on his sleeve. Some sort of outburst after breaking his deceased father's record was to be expected. But dropping a G.D. on Sunday television? That's a G.D. nuclear bomb.

Watching this next video will help you understand who Pete is screaming at (but not really).

The above video puts the madness into context. Unfortunately, it leaves us with more questions than answers.

Who the hell is Pete barking at?

Theories on the Internet suggest there was never a heckler at all. Watching the footage doesn't provide a clear culprit, so armchair sleuths surmised Weber's outburst an elaborate effrontery for intimidation. By this theory, Weber was either psyching himself up or trying to psych out Fagan through indirect confrontation. A little of this, a little of that...

It's not the craziest idea and there is supporting evidence. It's well known that Shaq made up beef with NBA big man David Robinson for the same reasons. He even published the imaginary slight it in a book. But it was all bullshit. I've seen Shaq on TNT this year talking about how he made up to psyche himself out. So, it happens.

And, as mentioned before, the identity of the heckler is unclear from ESPN's video and audio. Being unable to ID the unruly fan is so bizarre because Weber reacts so strongly. You'd think you'd be able to tell what's bothering him. So, nine years after the incident, is Weber ready to admit there was never a heckler?

Of course not. Pete offers an alternative view.

According to the Mad Man himself, Pete was yelling at a nine-year-old boy. Not his son, nephew, or grandkid - Pete says he was yelling at a random nine-year-old boy who didn't want him to win. And I guess he was the only one who could see or hear the child's trash talk? I don't know... either way, Weber seems crazy. I almost prefer the Internet's conspiracy theory to Pete's rationale.

This was far from Weber's first verbal outburst in the alley; nor was it his last. It does remain his most famous. That's why HE IS the Bad Boy of Bowling.

Just about every year, Weber's speech starts trending on social media. (Next year makes the 10 year anniversary). And why shouldn't it? Its awesomeness ages like a fine wine. This trend will likely cement Weber in the annals of sports history for generations to come. If anyone deserves it, it's Weber. He's the Tiger Woods of the bowling alley.

Pete Weber has proven to be the last of his kind. With his retirement, a breed of Rockstar Kingpins racked their bowling balls for the last time. He finished off his career in March 2021 in typical Weberian fashion, quote:

"Hate me or love me, you watched. That's all you could do."

Incredible. Really let the arrogance of that statement marinate for a few moments. It's rich in both depth and flavor. It makes me want to do a Chef's kiss and gag, all at the same time.

Pete Weber is a Goddamn American Hero. Whatever you think you are, forget about it... Pete Weber Still Is.

MORE: This 10-Year-Old's Pump-Up Speech is the Stuff of Legends