Olympic gymnast Simone Biles may still only be a 24-year-old athlete, but she's already the most decorated American gymnast of all time. The four-time Olympic gold medalist has won a combined 31 Olympic and World Championship medals, making her the queen of tumbling.

At 19, the 4-foot-8 flipping sensation took the world by storm at the 2016 Summer Olympics in Rio de Janeiro and flipped her way into the record books. Behind a dazzling floor routine and a high-flying vault performance, Biles set an American record for most gold medals in women's gymnastics at one single Olympics.

Biles has proved to be more than just an athlete on the mat. She played a prominent role in taking down former gymnastics doctor Larry Nassar, who she said sexually abused her (as well as more than 200 other athletes), and USA Gymnastics, who she said hid the investigation from her.

The U.S. athlete trained for the coronavirus pandemic-delayed 2020 Tokyo Olympics during 2019 and 2020. During this time, Biles made some pretty big life choices, including splitting from her boyfriend of three years and starting a relationship with a professional athlete. 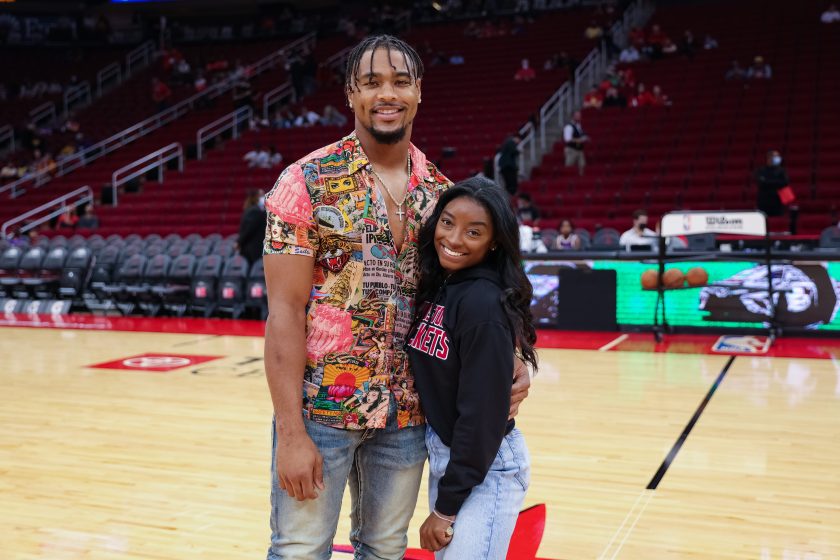 She first posted piggyback ride photos with the NFL player on her Instagram story celebrating his 25th birthday in July 2020. She then posted what looks to be like an "Instagram official" selfie picture of them on August 3 that year with the caption, "it's just us."  Biles also posted a photo of Owens on Valentine's Day in 2021. Owens posts about her often on his own Instagram account.

So who is this Jonathan Owens dude? Owens played his college ball at Missouri Western State University, a Division-II school in St. Joseph, Missouri. The 26-year-old athlete is from St. Louis.

Standing 5-foot-10, 210 pounds, Owens signed with the Arizona Cardinals as an undrafted free agent after the 2018 NFL Draft. He was waived by the Cardinals in 2019 and subsequently signed by the Texans, where he spent time on the practice squad and active roster. He's far from an NFL star but he appeared in one game in 2019 and six games in 2020. in 2021, he saw time in seven games and recorded his first career interception.

Owens appears to have a pretty good sense of humor. Biles posted a TikTok of them dressed in each other's clothes, and it's hilarious:

some entertainment for your night?
ENJOY / tik tok: therealsimonebiles pic.twitter.com/vUVmyigdKD

Biles told Hoda Kotb of "The Today Show" why she and Owens mesh well together.

"He's a real man. I just, I love him. We have a great time together," she said. "Our personalities match right up. We have the same sense of humor. And he's just great. He's an athlete, too, so we really understand each other and I think that's why our relationship has been seamless."

Though Biles is the biggest name in U.S. Gymnastics, she doesn't call the likes of Los Angeles or New York City home. She reportedly lives in Houston, which makes her relationship with the Texans player ideal.

Though they're both Texas residents, they actually met on a dating app called Raya (it's a celebrity dating app, which is why you might not have heard of it).

Jonathan had no idea who Simone Biles was. I guess he didn't watch the 2016 Olympics and missed her dominating all-around competition.

"He would say I slid into his DMs," Biles told Wall Street Journal Magazine. "I saw him and I was like, 'Oh, he's pretty cute,' so I said hi ... and then I saw that he was in the Houston area, so we started chatting a little bit, and then we went to hang out a week or two later."

FaceTimes followed. It wasn't until Simone's sister Adria invited Owens on a family vacation that things began to get serious between the two of them. Owens became a staple at Biles family dinners and they've been an item ever since.

"We ended up hanging out right before the pandemic," Owens told Texas Monthly. "It was one of the few times in her life where everything was just shut off and she couldn't do anything. So we used it to get to know each other--really get to know each other. It created our bond and made it stronger. Now I'm so thankful. Her energy is something. She's always happy, giggly, bubbly. If I've had a tough day at the office, I wouldn't want to take that home to her. Her personality, man...."

When Biles withdrew from the US Gymnastics team finals at the 2020 Olympic Games in Tokyo, Japan, for mental health reasons and what she explained as the "twisties," her boyfriend shared his thoughts for the first time and wrote a message of support in an Instagram post.

"Imma ride with you through whatever baby. Your strength and courage is unmatched and you inspire me more and more everyday SB. You always gone be my champ baby and don't you ever forget that, i love you so much and i can't wait till you come home and i get to see that beautiful smile again. You know I'm always here for you baby," he wrote.

Biles was expected to be the darling of NBC's Olympic gymnastics coverage. She may have pulled out of Team USA's team and individual all-around finals in Tokyo, but she had the support of fans, teammates (including Sunisa Lee), her parents, her siblings, her French bulldogs and especially her boyfriend, Jonathan.

I can?t wait to spend forever & ever with you, you?re everything I dreamed of and more! let?s get married! ??@jjowens_3 pic.twitter.com/BcrWvhEE38

Owens put a ring on it.

The two announced they were engaged on the morning of February 15, 2022, just two days after the Super Bowl. Judging from the size of the diamond on the engagement ring, Owens must have spent a good chunk of change when he popped the question.

"WOKE UP A FIANCÉE," Biles wrote on her social media accounts. "I can't wait to spend forever & ever with you, you're everything I dreamed of and more! let's get married!"

favorite time of year with my favorite person ? pic.twitter.com/8ph8PpPeim

Ervin, who is a former Michigan Wolverines gymnast and, according to eonline.com, was the director and head coach of the men's gymnastics program at the World Champions Centre in Spring, Texas, and even spent some time working with WWE, was easily Biles' biggest fan during their relationship.

He went viral in 2019 when a video was posted of him cheering on his Olympian girlfriend while watching her compete on TV during the World Championships. She won five gold medals, so it's safe to say he was ecstatic.

According to PEOPLE magazine, Biles and Ervin went public with their relationship in 2017 when he accompanied her to her induction into the USA Gymnastics Hall of Fame. She also called him the "man of her dreams."

Biles and Ervin first met in 2014 at the P&G Championships, according to PEOPLE's website. That's quite the timeline and considering they've known each other for so long. Maybe she was looking for a ring instead of a medal.

Why Did They Break Up?

Simone Biles confirmed in a cover story for the August issue of Vogue that she and her fellow gymnast boyfriend parted way in early March during the coronavirus pandemic. Fans of hers noticed he didn't wish her a happy birthday in social media pic on March 14, signaling the two's split after three years of dating.

"It's hard being young and having that long of a relationship and then ending it," the female gymnast told Vogue magazine. "But it was for the best."

Biles then scrubbed him from her Instagram. Now, her feed consists of photos of gymnastics posts, her new fiancé, sitting poolside in a bikini and supporting Black Lives Matter. You can expect plenty more with her new boyfriend, Mr. Owens.

This post was originally published on August 4, 2020 before updating after their engagement.