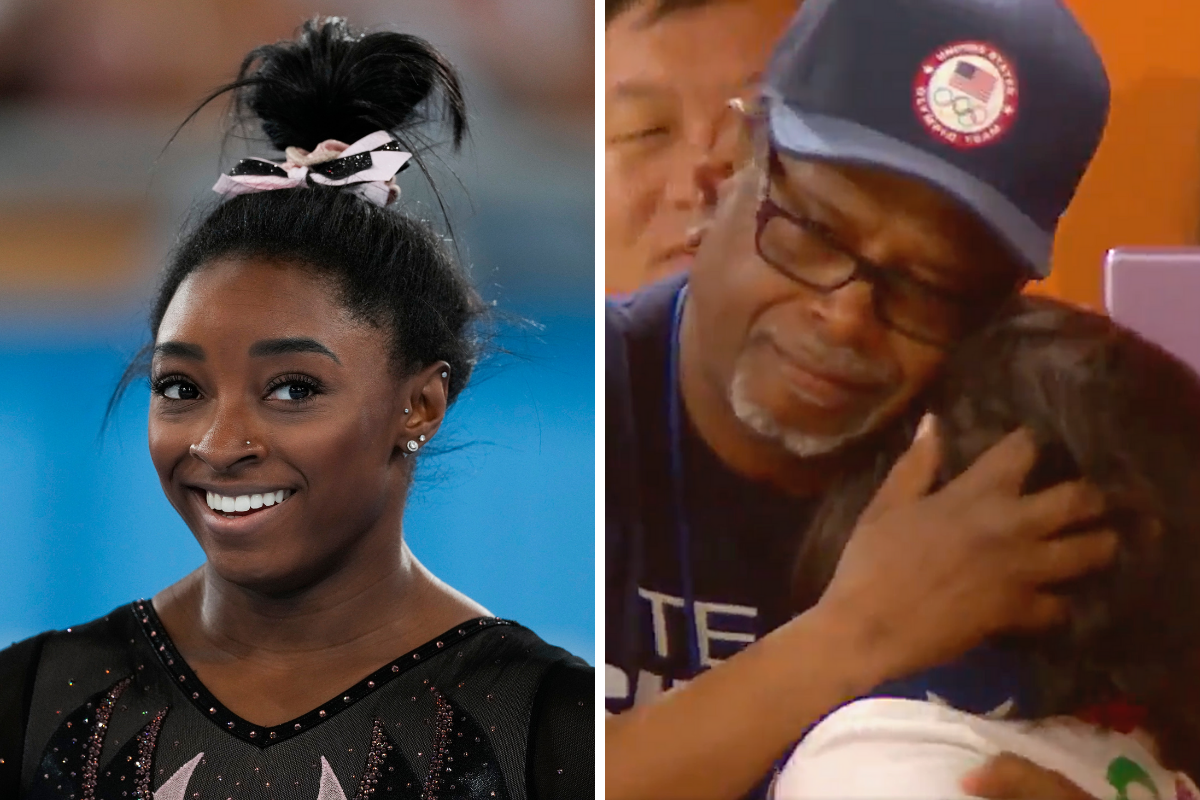 To watch American Olympian Simone Biles move is to be amazed. To see her land the flips that she does looks like a glitch in the matrix, and she’s set to do the same at the 2020 Tokyo Summer Olympics.

Simone will be head over heels, spinning, seemingly destined to crash when suddenly, like a cat at the last moment, she reorients in a blink, landing smoothly on her feet. How does she do that? How is she so calm?

Simone Biles has seen way more turmoil off the mat than on it. Run through the foster care system by a struggling mother, Simone had to get serious from a young age. The ADHD-rattled youth’s ability to focus has made her the most decorated gymnast of all time.

She didn’t do it on her own. Her grandparents adopted young Biles and her sister, changing their lives forever. Who is Simone Biles, and who are her caring parents?

Simone Biles ranks amongst the Michael Phelps of American Olympic athletes. She’s the most decorated American gymnast with a combined 30 Olympic and World Championship medals.

Alongside her Olympic team, dubbed “The Final Five,” Biles took gold in vault and floor and bronze on the balance beam in the 2016 Rio Olympics. She hasn’t slowed down since Rio de Janeiro, continuing to add to her ever-growing list of new moves named after her. Biles even competed on “Dancing with the Stars” but came in fourth place. It is seemingly the only world all-around title Biles can’t win.

Olympic gold medalist Simone Biles is renowned for her strength. To survive a past like hers, she had to be strong.

Her difficult childhood notwithstanding, Biles is a sexual abuse survivor. She was assaulted by the infamous USA Gymnastics doctor Larry Nassar, one of many victims. Biles was given an Arthur Ashe Courage Award for coming forward and emotionally talking about the traumatic experience.

A powerful moment between Hoda and Simone Biles while discussing Larry Nassar:

Biles turned professional in 2015, de-committing from UCLA gymnastics in the process. Biles now sports endorsements and sponsorships with Kellog’s, Hershey’s and formerly Nike. In May 2021, Biles announced she was leaving the Swoosh and joining fellow US Olympian Allyson Felix at Gap’s female-focused athletic-wear brand, Athleta.

Olympic gymnast Simone Biles is the worldwide leader in artistic gymnastics. She’s been on the cover of every major magazine, from Time’s Most Influential to ESPN The Magazine. ESPN has also awarded Biles several ESPYs. She’s won a Laureus World Sports Award for Sportswoman of the year three times, has won four Olympic gold medals and has penned an autobiography titled “Courage to Soar: A Body in Motion, A Life in Balance.”

Courage is probably the best word to describe world champion Simone Biles. Due to a difficult upbringing, Biles had to be courageous from a young age.

Who is Simone Biles’ Biological Mother?

Simone Arianne Biles was born to Shanon Biles and Kelvin Clemons in Columbus, Ohio, in 1997 but grew up in Spring, Texas. Both her biological mom and dad struggled with drug and alcohol addictions.

They were soon unable to care for their children. Along with Tevin, Ashley and Adria, young Simone was quickly swept into the foster care system in Colombus, Ohio. In her Facebook Watch series titled “Simone vs. Herself,” Biles describes going hungry, watching her foster family feed a stray cat instead. Biles was in and out of foster homes from the age of 3 to 6.

?Growing up, me and my siblings were so focused on food because we didn?t have a lot of food. I remember there was this cat around the house and I?d be so hungry. They would feed this cat and I?m like, ?where the heck is my food??? she said in the series.

All the children were adopted by a family. Older siblings Tevin and Ashley went to live with Shanon’s aunt, Harriett. Simone and her younger sister Adria were adopted by Shanon’s father Ronald Biles and his wife, Nellie Cayetano Biles.

With Ron watching the younger sisters and Ron’s sister caring for the older siblings, the Biles children were finally out of the system. After her adoption, Biles didn’t see her birth mother again for six years.

“I got you”. That’s what a spotter says in gymnastics.

“We got you.” That’s what the parents of @Simone_Biles said to her at 3 years old, when grandma and grandpa became mom and dad. #TokyoOlympics@SterlingKBrown @NBCThisisUs @nbc pic.twitter.com/UfsQcpE5mD

Nellie and Ron Biles met for the first time in San Antonio when he was with the Air Force. Ron was a single dad raising his only daughter, Shanon. Nellie married Ron, adopted Shanon and added two more sons, Ron Jr. and Adam. They were Simone’s uncles before Ron adopted the youngest Biles sisters. They soon became her brothers.

Nellie and Ron provided the stability Simone and her sister needed to thrive. Simone found she had an instinct for tumbling after an impromptu field trip to a gymnastics gym in elementary school. Her parents helped hone her instincts by giving her classes at Bannon’s Gymnastix in Houston, led by coach Aimee Boorman. Simone became so advanced that she had to choose between everyday life and a great one.

“My parents saved me,” she said, via Women’s Health magazine.“They?ve set huge examples of how to treat other people, and they?ve been there to support me since day one. There?s nothing I could say to them to thank them enough.”

Nellie said it was tough at first being an adoptive mom.

?I knew I had my own barriers because these were not my biological children. You do everything that?s nurturing, that?s mothering, but emotionally, you still have to be there 100%,? Nellie said on “Simone vs. Herself.”

When faced with the choice of becoming home-schooled to train more or continue going to public school, Biles was afraid of being alone. She eventually chose home-schooling, a decision that’s since worked out.

Biles’ maternal grandfather and step-grandmother, her adoptive parents, have supported her every step of the way, from her first tumble to the Olympic games. Despite her small stature, Biles stands tall among the greatest athletes and celebs of her generation.

Ron and Nellie Biles have a routine they perform while watching their daughter. Every time Simone nails it, they give each other a smooch. If NBC installs a kiss cam, I am sure they will be practically making out in the stands of the coronavirus pandemic-delayed 2020 Tokyo Olympics when the U.S. gymnastics team takes the mat.