Michael Phelps’ Net Worth: How The Greatest Olympian Earned His Gold 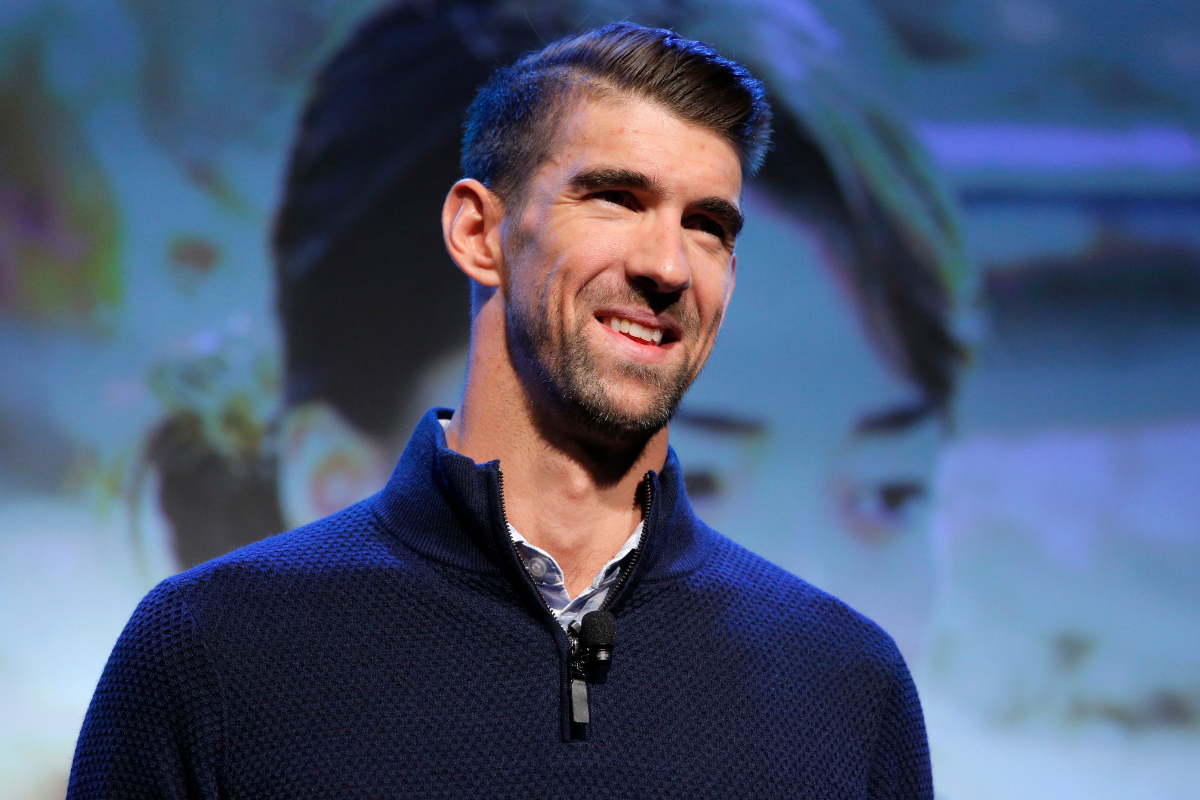 Michael Phelps is the most decorated American athlete in Olympic history, but his legacy runs deeper than the United States.

Sorry, Gerard Butler fans — I’m not talking about King Leonidas. This is FanBuzz, not Sparta.

Leonidas of Rhodes was an Olympic runner in the fourth century, B.C. For over 2,000 years, he was the King of Olympic Gold. In 2016, Phelps surpassed the ancient Greek hero to stand atop Mt. Olympus, all alone.

Setting the new gold standard has its perks. Phelps made millions from fame and endorsements. He made enough money to fill a pool with gold and swim laps, DuckTales-style.

But Phelps is no Scrooge McDuck –– the male swimmer is a champion above all else, and he’s overcome more than just the Serbians.

Michael Fred Phelps II was born on June 30, 1985, in Baltimore, Maryland, when the No. 1 song was “Sussudio” by Phil Collins.

Phelps and his sisters were raised in a single-parent household by his mother Deborah “Debbie” Phelps in the Baltimore area. His relationship with his mother cannot be separated from his achievements. Had Debbie Phelps not spent thousands of thankless calories feeding the Baltimore Bullet, the United States would have 23 fewer Olympic gold medals.

Phelps spent his formative years in the Baltimore area idolizing athletes like Ray Lewis and his Baltimore Ravens. Like many successful athletes, Phelps suffered from ADHD as a child. He joined a swim team at the age of seven, and adults soon noticed that he was basically half-tuna.

By the time Phelps hung up his Speedo for good, he had been a U.S. Olympic athlete for over a decade.

Phelps’s Olympic career began when he was a teenager. After eight years of swimming competitively in Maryland, Michael Phelps made his first Olympic team in Y2K at 15. Before Phelps had a driver’s license or GED, he had his first shot at gold.

The 15-year-old Flying Fish had a lot to learn about gold on his journey Down Under at the 2000 Olympics. He was the youngest male Olympic swimmer in 70 years but didn’t reach the podium in his first games. His best finish was fifth in the 200-meter individual medley.

Phelps’ Sydney Olympics experience completely changed his life. While he was dedicated before the 2000 Summer Olympics, his failure to place helped the ADHD-addled Phelps intensify his focus on gold. Phelps graduated from Towson High School in 2003. He graduated to gold the following summer in the 2004 Olympic Games.

Phelps made his name known in the birthplace of the Olympics. The 2004 Summer Olympics in Athens, Greece, was his big breakthrough year. He out-swam the competition in the 100-meter butterfly, 200-meter butterfly, 400-meter individual medley (IM), and three other events. For his first Olympic gold ever, Phelps shattered the previous 400-meter IM world record.

After winning six Olympic golds in 2004, Phelps became waterlogged with fame and expectation. His six medals were one short of the previous record for most golds won in a single Olympics. Mark Spitz won seven golds in 1972.

Phelps trained with a new goal in mind: break Spitz’s record. Phelps spent the next four years swimming under Bowman at the University of Michigan. Their training sessions are more legendary than Sasquatch. Bowman used to make Phelps swim pool sprints for two-and-a-half hours straight, which sounds like an oxymoron. Phelps was pushed to new pool lengths. In 2008, his Herculean efforts paid off.

RELATED: Kerri Strug Stuck the Landing 25 Years Ago, But Where Is She Now?

The 2008 Olympic Games were held in Beijing, China. The world held their breath in anticipation of what Phelps could do. His lofty goal of setting the record straight would be realized by the time he returned home, but not without some drama.

Most memorable was the team medley Michael Phelps won by the narrowest, narrowest, narrowest of margins against rival Serbia. The 2008 Beijing Olympics would be Phelps’s most significant accomplishment at a single Olympiad. However, he was eight summers away from his 23rd gold.

Phelps traveled to London for the 2012 Olympics and left with four golds. Michael Phelps is so dominant in goggles that the world is shocked when he only wins four gold medals. After the 2012 Games, Phelps’  gold portfolio reached 18.

Unexpectedly, he almost threw in the towel.

Phelps, exhausted from so much damn swimming, retired his swim cap from 2012-2014. The Weight of Gold was weighing him down, and Phelps needed a reset. His two-year hiatus proved just what the doctor ordered, and Phelps returned to competition before the 2016 Summer Olympics.

Phelps won five gold medals in Rio de Janeiro, ending his career with a series of records. When the US men’s medley team won the 400-meter relay, Phelps accepted his 23rd Olympic gold medal, the most for an individual of all time.

His victory broke the previous Olympic record for the 400-m relay and gave the United States gold medal #1001. Phelps retired from the lanes for good after the Rio Olympics.

Oh, yeah: Phelps has a ton of bronze and silver medals, too. Not a record-setting amount, but more than most.

Phelps was so good throughout his Olympic career that many questioned if it was too good to be true, like Barry Bonds in the late 1990s. Phelps was consistently tested for performance-enhancing drugs throughout his career and passed every test with flying colors.

Maybe they should’ve tested for performance-diminishing drugs instead.

The Baltimore Bullet is primarily associated with two colors: gold and green. America’s most outstanding athlete of all time got caught smoking weed one time. Smoking lettuce cost Phelps some lettuce.

A photo went viral of Phelps ripping a bong at a South Carolina party in 2009. What kind of lame-ass snitches on an Olympic god for letting loose is beyond me, but someone snapped a photo and sold it to the highest bidder.

America’s irrational fear of marijuana kicked in, and Kellogg’s dropped Phelps as a sponsor. Fortunately for Phelps, Wheaties is made by General Mills.

The incident should be inconsequential, and I only bring it up for two reasons: You were expecting me to, and the whole thing goes to show that archaic marijuana stigmas do more damage to people than marijuana could ever inflict.

Seth Meyers of SNL summed the scandal up better than anyone, quote:

“If your kid says ‘Michael Phelps smokes pot, why can’t I?’, just say ‘You can. Right after you win 12 gold medals for your country.'”

Michael Phelps did more for the United States than recent presidents. One hit does not a stoner make, so stop making him feel bad for getting high.

Phelps lost Kellogg’s, but who cares? He still had sponsorship deals from Omega, Subway, Visa, Speedo, Under Armour, and even Louis Vuitton.

With sponsors like that, you know Phelps made (and hopefully inhaled) quite a bit of green.

He doesn’t eat 12,000 calories a day anymore (he never did), but Phelps could afford to eat like that if he wanted. The retired gold medalist is worth $80 million, or $10 million for every gold he won in 2008. Not bad for a druggie apparent.

Phelps shares his wealth with his wife Nicole Johnson and three sons: Boomer, Becket, and Maverick. The family is heavily involved in Phelps’s philanthropic initiative, the Michael Phelps Foundation, and live in Paradise Valley, Arizona, near Arizona State University.

At ASU, Phelps has taken on the role of a swim coach. He coaches alongside former mentor, coach, and winning-partner, Bob Bowman.

Phelps is a vocal advocate for mental health awareness. Phelps struggled with suicidal thoughts at the peak of his career, but has since turned his fight into inspiration. If even Michael Phelps feels down sometimes, I suppose it’s okay that I do, too.

The American swimmer is the winningest Olympian of all time. Being the winningest athlete in a cover 2000-year-old competition is about the most impressive thing a person can do, besides swimming laps without a break for two-and-a-half hours.

Michael Phelps has done it all, persevered, and lived to tell the tale. American hero Michael Phelps is worth every gold coin of his $80 million, and probably even more.