Texas Madness: Let’s Find the Most Famous Texan Ever 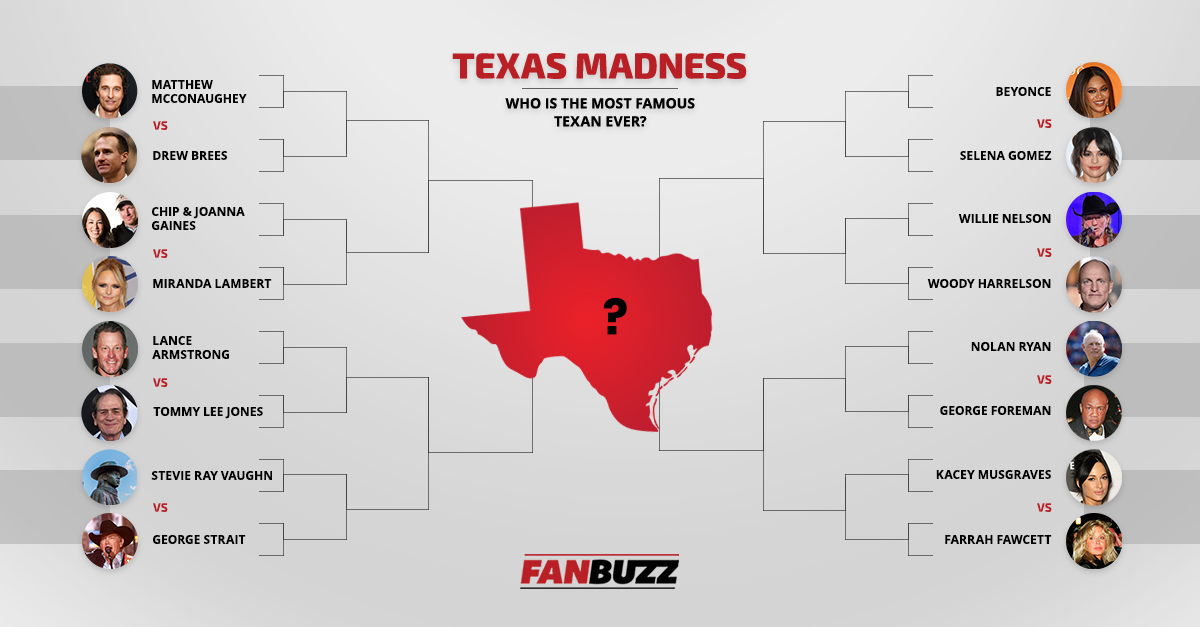 Welp, here we are. The COVID-19 coronavirus strain brought destruction to the sports world, the likes of which we’ve never seen before. Professional leagues like the NBA, NHL and MLB suspended operations for several weeks. Non-contact sports like the PGA Tour and NASCAR postponed upcoming events. President Donald Trump declared a national emergency on Friday the 13th, which is about as eerie as it gets.

The biggest domino of the sports world, however, was the cancellation of March Madness. The annual NCAA Tournament brings non-college basketball fans and die-hard bracketologists together for several weeks of fun. We fill out our brackets with family bragging rights and office pools on the line, all for the sake of community and fun. Sadly, the fun stopped in 2020 as the NCAA canceled all winter and spring championships, including both the women’s and men’s basketball tournaments. Things only seem to getting worse as the days drag on.

Have no fear! We’ve created a Lone Star State challenge that anyone can enjoy. Without further ado, it’s time for you to decide on the most famous Texan of all time.

There were tons to choose from, but we picked 16 seeds of some of Texas’ greatest sons and daughters. Pride for the second-largest U.S. state is stronger than most. Before you get busy filling out that bracket with your friends, family, coworkers, mailman, and anyone who doesn’t have the coronavirus (Just kidding. They should fill one out, too.), I asked my colleagues at Wide Open Media to help defend their favorite Texans.

You don’t get a title like “Minister of Culture” for the University of Texas Longhorns if you don’t bleed burnt orange. McConaughey attended Longview High School in East Texas before studying at UT-Austin where he still sets up camp as a die-hard Longhorn and supporter of all-things Texas. One of the most famous actors of this generation, he won the Academy Award for Best Actor in Dallas Buyers Club and put on timeless performances in Dazed and Confused, True Detective, The Wolf of Wall Street, Mud, and many others.

Ladies and gentlemen, he’s the No. 1 overall seed for a reason.

“Drew Brees is the perfect underdog, a living legend everybody can’t help but root for. The New Orleans Saints quarterback and Austin, Texas native is one of the greatest players in NFL history. He breaks records. He’s a family man. He impacts the community. Everything Brees touches is pure gold, and he’s the unquestioned leader everyone should want to follow. A perfect Texan.”

“While this couple wasn’t born in the Lone Star State, together they’ve transformed a number of lives in Texas. Gaining fame on the television show “Fixer Upper,” Chip and Joanna have remodeled and fixed up 100s of homes together as the owners of Magnola Homes in Waco, Texas. Today a visit to Magnolia Market at the Silos is the highlight of most trips to Waco!”

The Longview, Texas native burst on the scene with her album, Kerosene, back in 2004, which was certified Platinum — She never looked back. She’s recorded several studio albums, both solo and with the Pistol Annies, and she’s won two Grammy Awards and two CMA Awards for Album of the Year. Most mind-boggling of all, Lambert won the ACM Award for Female Vocalist of the Year nine times in a row. She’s one of the most iconic female country singers of the generation and should be a dangerous front-runner to come out of the West Region.

Yes, the Plano, Texas native admitted to cheating during his time dominating the world of professional cycling. But let’s be honest about something: Lance Armstrong is one of the most famous and recognizable athletes of our generation. He was diagnosed with stage three testicular cancer at age 25, then returned to his sport and won the Tour de France seven-straight times. He was named Best Male Athlete at the ESPY Awards four-straight years, received global awards for nearly a decade, and then, yes, he admitted to doping the entire time.

Like him or not, there’s no denying the popularity of this man.

Want to know what Texas looks like? Grab a picture of Tommy Lee Jones. Hard-nosed and rugged, the award-winning actor is a Texan through-and-through. He owns a 3,000-acre ranch in the state, and the San Saba, Texas product never shies away from his upbringing. Don’t let films like Men in Black fool you. This guy is a cowboy hat-wearing lifer whose talent and intelligence — he attended Harvard and roomed with Al Gore — makes him one of the most influential actors of our time.

When you talk about the greatest guitar players ever, it’s impossible to leave Stevie Ray Vaughan off the list. The Dallas-born, Austin-bred legend earned induction into the Rock and Roll Hall of Fame, Blues Hall of Fame and Musicians Hall of Fame and Museum. Had a helicopter crash in 1990 not claimed his life at age 35, Vaughan likely would’ve taken more than just six Grammy Awards and ten Austin Music Awards back home, and he would’ve been melting faces to this day.

“Ever since the opening notes of that lonesome fiddle rung out on “Amarillo By Morning” George Strait has been praising his home state. And Texans have returned the favor time and time again. He’s racked up 61 No. 1 hits — more than any other performer in history — and set a record for the largest indoor concert ever in North America during the final Texas show of his touring career.  Texas just wouldn’t be Texas if you couldn’t drink a Lone Star while listening to “All My Ex’s Live in Texas” in a Hill Country dance hall. Write this down: even the most reluctant country fans have to tip their hat to King George.”

“Beyonce is one of the most influential artists of the decade by proving she is an icon through her awe-inspiring performances and music. Throughout her career, she has made it a point to fight for her culture and women and has explored themes of black pride, intersectional feminism, capitalism and independence. She made history by becoming the first African American woman to headline Coachella, and used her performance to celebrate black culture, as well as her career. Originally from Houston, Texas, she has become a living icon and an entity by changing culture and challenging others to join her along the way.”

She’s 27 years old, but there aren’t many solo female singers bigger than Gomez in world today. At one point, the pride of Grand Prairie, Texas was the most followed person in the world on Instagram. She started as a child actor, but parlayed her Disney Channel days into a music career that’s included three studio albums. Her most recent, Rare, debuted at No. 1 on the Billboard 200 in the United States, as well as charts in countries across the world. She’s got a tough first-round matchup, but Gomez deserves to be here.

Abbott, Texas gave us the king of outlaw country, and Willie Nelson is one of those figures whose legacy will be hard to top. The icon’s won dozens of awards, including 11 CMA Awards and 13 Grammy Awards. Nelson’s reach extends far beyond music, though, as he’s an advocate for numerous charities and causes like animal welfare, bio-fuels and, of course, the legalization of marijuana. Nelson may be under-seeded here, which makes him a dangerous underdog in the bracket.

Harrelson hails from Midland, Texas, but moved to Lebanon, Ohio as a young teenager. An acting career sent Harrelson all over the map, most notably getting his start as Woody Boyd on the hit television series Cheers. From there, Harrelson went on to star in films like White Men Can’t Jump, Kingpin, The Messenger, and No Country for Old Men among many others. He and fellow Texan Matthew McConaughey formed a dynamic duo in HBO’s True Detective, which might be my favorite season of television ever. Don’t sleep on Woody making a run.

“Words don’t do Nolan Ryan’s Hall-of-Fame MLB career justice. Numbers and videos do. The Refugio, Texas, native struck out more batters than anyone in baseball history and twirled an astonishing seven no-hitters. The Ryan Express also was victorious over Robin Ventura in the greatest on-field fight America’s Pastime has ever seen. The Houston Astros legend went on to become CEO of the Texas Rangers and now owns his own beef company in Round Rock, Texas. Plus, Ryan is close to the Bush family. It doesn’t get more Texas than that.”

Foreman is a two-time World Heavyweight Champion boxer with a career record of 76-5 with 68 knockouts. He’s an Olympic gold medalist. He faced off with Muhammad Ali in perhaps the most famous boxing match ever, “The Rumble in the Jungle.” The Marshall, Texas native became the spokesman for, honestly, the greatest innovation in cooking: the George Foreman Grill. Big George is in his early 70s now, but this is one Texan who could easily go the distance.

Need a hit album? Kacey Musgraves churns out instant classics like Stetson does cowboy hats. She’s only 31 years old, but Musgraves has already won six Grammy Awards, seven CMA Awards, and four ACM Awards. From her debut album, Same Trailer Different Park, to 2018’s Golden Hour, the Golden, Texas product never fails to deliver knockout vocals and beautiful lyrics. Get on board. Musgraves is a favorite to make a run.

Oh yeah. The original Charlie’s Angel could win this thing easily. Nominated for several Emmy Awards and Golden Globe Awards in her acting career, Fawcett grew up in Corpus Christi before attending the University of Texas in Austin, where she studied Art. If you grew up in the 1970s and early 80s, and you didn’t have this iconic poster — it sold 20 million copies, just FYI — I’d be shocked. Fawcett passed away from cancer in 2009, but her impact on several generations can’t be overstated. She’s a true Texan and an all-time great.