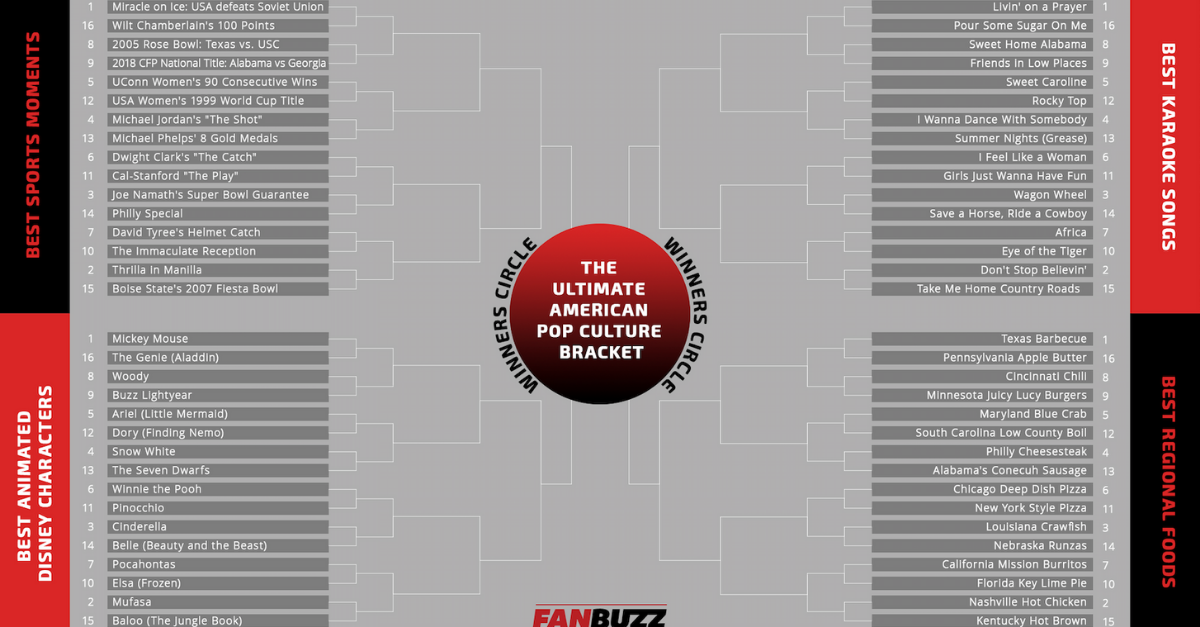 Every year, millions of people fill out their NCAA Tournament brackets. When a casual sports fan sees Iowa State versus Nevada in the first round, they probably flip a coin and make a random guess because they have no idea what in the hell they’re doing. While 68 teams get selected to take part in March Madness, there are only a few teams that people really recognize for the program’s basketball acumen. The rest is totally up to chance.

That got us thinking: what kind of tournament-style bracket can relate to anybody regardless of where they’re from, yet still capture the spirit of “may the best man win?” FanBuzz created The Ultimate American Pop Culture Bracket as a challenge for every American, regardless of where you’re from, to turn everything you thought you knew about March Madness upside down.

(1) Miracle on Ice vs. (16) Wilt Chamberlain’s 100 Points: The most iconic moment in American sports was the U.S.A. hockey team defeating the USSR at the 1980 Winter Olympics. Pitted against them is Wilt Chamberlain’s NBA record 100-point game, one record that will never be touched again.

(8) 2005 Rose Bowl vs. (9) 2018 CFP National Title: Two of the best games in college football history face off against each other here. Vince Young and Texas’ incredible win over the USC Trojans goes head-to-head with Tua Tagovailoa and Alabama’s comeback, overtime win against SEC rival Georgia in 2018.

(5) UConn Women’s 90 Consecutive Wins vs. (12) USA Women’s 1999 World Cup: Did you think American sports history wouldn’t include two of the greatest women’s performances ever? The UConn Huskies streak is the longest in basketball history — men’s or women’s — and they take on the U.S. women’s soccer team and Brandi Chastain’s iconic winning goal in a shootout to beat China.

(4) Michael Jordan’s “The Shot” vs. (13) Michael Phelps’ 8 Gold Medals: In a matchup of the Michaels, His Airness’ game-winning shot to win his sixth and final NBA championship faces off with Phelps’ 2008 Summer Olympics, where he won a record eight gold medals, breaking Mark Spitz’s record.

(6) Dwight Clark’s “The Catch” vs. (11) Cal-Stanford’s “The Play”: Great moments get great names, and two of football’s best are right here. Dwight Clark of the San Francisco 49ers caught Joe Montana’s arching pass to win the 1981 NFC Championship, which launched their dynasty. On the other side, the greatest play in college football history saw California beat Stanford as Kevin Moen ran through Stanford’s band to win the rivalry game.

(7) David Tyree’s Helmet Catch vs. (10) The Immaculate Reception: Some catches are great, but these two were simply incredible. In Super Bowl XLII, the Giants ended New England’s perfect season thanks to the miraculous catch by David Tyree. Back in 1972, Pittsburgh Steelers legend Franco Harris caught the most improbable, ricocheted pass to defeat the Oakland Raiders and launch Pittsburgh’s dynasty of the 1970s. Which is more iconic?

(2) Thrilla In Manilla vs. (15) Boise State’s 2007 Fiesta Bowl: There are so many great Muhammad Ali fights, but his third and final against Joe Frazier is considered the greatest boxing match in history. Trying to take down this titan is the greatest underdog in college football history, the Boise State Broncos, who used three trick plays to defeat the mighty Oklahoma Sooners.

(1) Mickey Mouse vs. (16) The Genie (Aladdin): Let’s be honest, there’s no bigger Disney character than Mickey Mouse, but put him against one of the greatest characters in movie history, The Genie? This one could be an all-time upset…

(8) Woody vs. (9) Buzz Lightyear: Two toys. Best friends. Brothers. Deciding on this matchup is going to break some hearts along the way, but there can only be one winner.

(5) Ariel (The Little Mermaid) vs. (12) Dory (Finding Nemo): Dive deep down in the sea and you’re going to find two of the greatest characters ever. Ariel inspired millions of Halloween costumes, but Dory is just downright hilarious. This could go either way.

(4) Snow White vs. (13) The Seven Dwarfs: Oh yes, it’s time to settle the debate. Who was truly the greatest of this dynamic duo?

(6) Winnie the Pooh vs. (11) Pinocchio: Two of the most-loved Disney characters ever play each other, but something has to give. Both could be dark horse winners in this region, but only one will make it out of the first round.

(3) Cinderella vs. (14) Belle (Beauty and the Beast): This was one of the most contentious selections, but Belle won a play-in game to get this matchup. Two Disney princesses, but the clock is going to strike midnight on one of them.

(7) Pocahontas vs. (10) Elsa (Frozen): It’s the “Colors of the Wind” squaring off with “Let It Go.” This matchup figures to be a coin flip toss-up, but both could very well make a deep run if they reach the Sweet Sixteen.

(2) Mufasa vs. Baloo (The Jungle Book): It was hard to put Mufasa as the two seed, but the original Lion King taught us all how to be a real leader. Facing him is the ultimate underdog (or underbear) in Baloo. The lovable bear gave us “The Bear Necessities” and reminded everyone to enjoy the little things in life.

(1) Livin’ on a Prayer vs. (16) Pour Some Sugar One Me: This category was difficult but was judged on one merit: how many people would know the words and start singing along? This opening round pits two classic rock juggernauts — Bon Jovi and Def Leppard — in a seriously difficult choice.

(5) Sweet Caroline vs. (12) Rocky Top: It’s Neil Diamond going toe-to-toe with the Osborne Brothers, and this is just another toss up that’s impossible to make an easy pick.

(4) I Wanna Dance With Somebody vs. (13) Summer Nights: It’s hard for Whitney Houston’s song to escape this round clean facing the greatest duet in karaoke history. Summer Nights from Grease could very easily be this region’s Cinderella story.

(6) I Feel Like a Woman vs. (11) Girls Just Wanna Have Fun: Two of the top choices for every girl in karaoke history is hard to pick from, so this will be a case of personal taste here. Honestly, they could both make deep runs in the tournament.

(3) Wagon Wheel vs. (14) Save a Horse, Ride a Cowboy: Country songs get the crowd going unlike any other, and these two were questioned as being under-seeded. Everybody knows these two, but who will come out on top?

(7) Africa vs. (10) Eye of the Tiger: There are power ballads, and then there are these two iconic songs. When they come on over the loudspeakers, everybody’s attention heads to the stage. You’re looking at two juggernauts that can win the whole thing.

(2) Don’t Stop Believin’ vs. (15) Take Me Home Country Roads: It’s going to be hard to unseat the defending champion in Journey, but if anyone can do it, it’ll be John Denver’s tribute to West Virginia, which is now the state’s official song.

(8) Cincinnati Chili vs. (9) Minnesota Juicy Lucy Burgers: You’ve never had Cincinnati Chili on spaghetti — called a “two-way” — or on your hot dog, it’s time to try it for yourself. Facing off with Ohio is one of the staples of Minneapolis, MN. There are “famous” Juicy Lucy burgers everywhere, proving that Minnesotans know how to eat GOOD.

(5) Maryland Blue Crab vs. (12) South Carolina Low Country Boil: You can eat seafood at Red Lobster if you want, but NOTHING beats getting it right from the source. These are two of the greatest seafood dishes in the country, hands down.

(4) Philly Cheesesteak vs. (13) Alabama’s Conecuh Sausage: Philadelphia’s cheesesteaks could reach the Elite Eight with their momentum, but first, they need to get past one of Alabama’s greatest exports that dominates dinner tables all across the South.

(6) Chicago Deep Dish Pizza vs. (11) New York Style Pizza: Oh yeah, it’s time to settle the score. Are you on team deep dish or do you love that thin crust, New York flop?

(3) Louisiana Crawfish vs. (14) Nebraska Runzas: While Louisiana’s best dish was a shoo-in, Nebraska stuffed sandwiches reached the tournament by making a huge late run. If you’ve ever had one in the Midwest, this one could be an upset.

(7) California Mission Burritos vs. (10) Florida Key Lime Pie: Going coast-to-coast for the 7 vs. 10 matchup, the Mission-style burrito originated in San Francisco, but you’ve likely had a similar one at Chipotle. In Florida, key lime pie is the king of the dessert game and is prepared to make a run.

(2) Nashville Hot Chicken vs. (15) Kentucky Hot Brown: Nashville’s ultra-crispy fried chicken is looking up at Texas BBQ to win this region, but they need to get past Kentucky’s open-faced turkey and bacon sandwich smothered in cheesy Mornay sauce. Even if you get stuck picking the winner, you’re going to go get yourself a good meal when this is all said and done!

READ MORE: What’s the Best College Town in Each State? This Unbelievable Map Ends All Debates