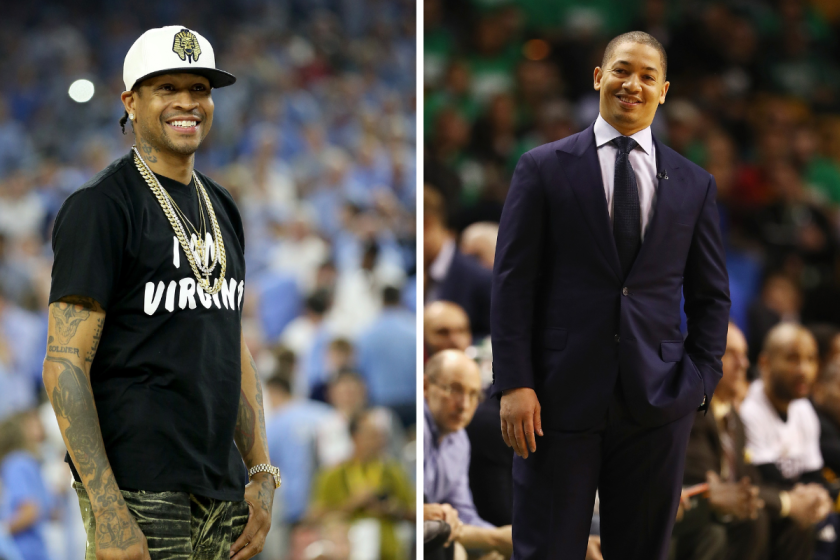 Allen Iverson has the ball on the right wing. He squared up, swept through and took Los Angeles Lakers guard Ty Lue to his right. As quick as cat, Iverson crossed back over to his left and pulled up for the 16-foot jumper. Lue extended to contest AI’s shot, but fell short. He tripped over Iverson’s legs and watched from the ground as the ball went through the net.

Allen Iverson being the coldest player in the league egregiously stepped over Lue on his way back down the court. Little did he know he created one of the most iconic shots in NBA history.

The Allen Iverson Step Over

The move itself was unbelievable. I mean, how is anyone going to defend 2001 Allen Iverson? The man was the NBA MVP and scoring champion. But, the step over is what cemented the moment in basketball lore. He emasculated the mighty Los Angeles Lakers, who were looking to defend their title and in the midst of a 19-game winning streak, in their own building. It was Iverson claiming ownership of the throne he took from Shaquille O’Neal and Kobe Bryant that night. The ultimate disrespect and ultimately awesome.

Naturally, Lue didn’t take kindly to Iverson’s slight. He ended up getting the last laugh when his Lakers beat Iverson’s Sixers in five games to win the 2001 NBA Finals. However, the result was predictable. The Lakers were a juggernaut and “The Answer” carried an uninspiring Philly squad to the NBA Finals. Winning one game was impressive.

Personally, though, Lue held a grudge. In a league where reputation is king, he became “the guy who Iverson stepped over” in an instant. The anger festered, but then something strange happened. He became good friends with the man who embarrassed him in front of millions on national television.

Lue was only 24 when Iverson stepped over him, so it makes perfect sense he wanted another crack at him when he was dealt to the Washington Wizards the following season. Still a young guy looking to prove himself, Lue had no hesitation confronting Iverson before a regular-season matchup.

“The next season, we got into it again,” said Lue, per GQ. “I came right up to him and said, ‘You keep talking that s**t about how you’re gonna give me fifty — well, here I am, m**********r.’ And he was like, ‘I don’t even know who you are. Who are you?’ I was like, ‘I’m the same person who won the championship ring last year.’ The first play, he went backdoor and scored, and he was yelling, ‘Gimme the rock, we can do this all night.’ And I was like, ‘It’s too late. You shoulda did it during the finals.’ After that we started talking more, and we became cool.”

In fact, Lue and Iverson have grown particularly close.

“We became really good friends after that,” Lue told ESPN in 2016 when he was the head coach of the Cleveland Cavaliers. “Like, after the [2001] Finals, probably four or five years after, we hated each other. But then after the careers went along, we became pretty close and had a good bond. He’s really a good friend of mine.”

Lue has taken his role in the play in stride. He jokes about it and recognizes his place in Sixers lore. When the Cavs were in Philly for a game during his first year as Cleveland’s head coach, Lue posed with a fan who had a picture of the crossover printed on a sweatshirt. He’s willing to look past it all because he got a ring at the end of the day.

“I mean, if you look at the image, I played good defense,” Lue told ESPN. “He snatched it back, I contested his shot, I’m looking (at the trajectory of the ball), I fall down and he steps over me. People act like I got crossed over and I fell and he stepped over me. So, it doesn’t bother me. We won the championship. That’s all that matters. It’s all about winning.”

However, he recognizes how he was perceived in the public eye.

“It definitely created buzz,” Lue continued. “When I was going places it was, ‘Oh, that’s the guy Allen Iverson stepped over!’ Well, if you know that, then you know me. So that’s fine. I don’t have a problem with that. He’s going to arguably go down as probably the best player under 6-foot in NBA history, so I don’t have a problem with that at all.”

Lue is still known for his part in the iconic moment. But, mind you, he had a solid NBA career. The journeyman played 11 seasons with seven different teams and averaged 8.5 points and 3.1 assists. Those numbers might not jump off the stat sheet, but he was a contributor alongside Michael Jordan during his twilight years in Washington D.C. and fed Tracy McGrady and Yao Ming in Houston.

As for Iverson, he’s gone on record saying the play was a heat-of-the-moment reaction.

“[Lue] was giving me so many problems, man, harassing me, just straight dog,” Iverson said on the “All The Smoke” podcast in 2020. “What’s so crazy is I don’t know how it happened. I didn’t know I did it. You don’t know when you’re gonna do something.”

He’s also said he isn’t a fan of seeing the play because of the bond he and Lue now share.

“I don’t like it because I love him,” Iverson told Rachel Nichols on “The Jump” in 2016. “I don’t like people joking on him and all that, because that’s my man.”

Coaches always told me friendship goes out the window when you step between the lines. Iverson and Lue didn’t have a relationship before the crossover, but they’ll be forever linked because of it. That doesn’t matter to them, though, because the friendship they share off the court is more important. Need more evidence? Iverson was one of the first to congratulate Lue when he was named Cleveland’s head coach in January 2016 after David Blatt was fired.

Nonetheless, the Internet couldn’t help itself.

These days, Lue is more known as a coach. Under his guidance and the superb play of LeBron James, the Cavs overcame a 3-1 deficit and defeated the Golden State Warriors to win the 2016 NBA title. Now, he’s leading the Los Angeles Clippers.

Yes, Philly fans will always cherish the iconic step over — as they should — but the growth of Iverson and Lue’s relationship goes to show that ‘Hey, you can cross someone silly, humiliate them and still be friends at the end of the day.’ After all, that’s what friends do.