I remember it like it was yesterday -- my boyfriend and I had been dating for a few months and we decided to take a trip to Vegas. Something that we both share is an intense love for the NBA, and we happened to schedule our trip during Game 7 of the 2016 finals. Needless to say, we stayed in our hotel room to watch the Golden State Warriors face off against the Cleveland Cavaliers before hitting the town for the night. The game did not disappoint -- full of lead changes, incredible plays and the historic block on Andre Iguodala by LeBron James. The Cavaliers went on to defeat the Warriors 93-89, infamously coming back from a 3-1 deficit and I remember thinking, "How the hell did that happen?"

Steve Kerr, Steph Curry & The Warriors: The Makings of an NBA Dynasty 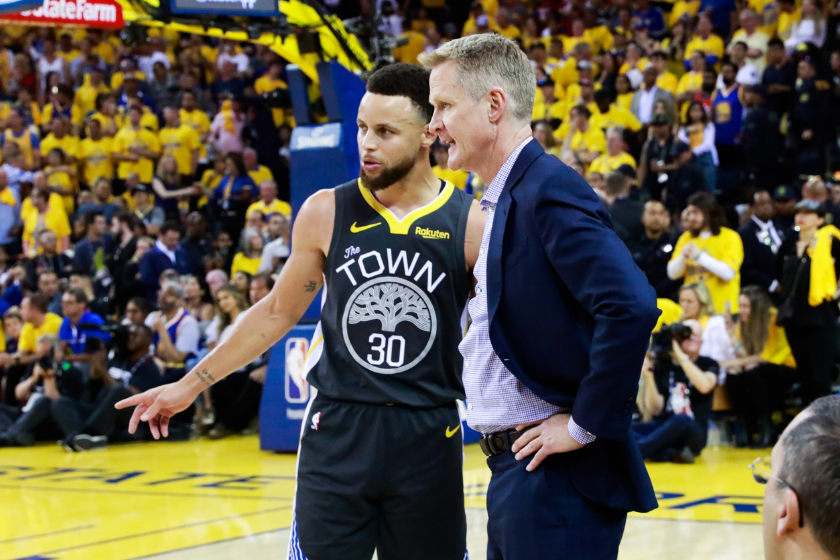 The NBA's Western Conference has had a slew of dynasties and close-calls over the years from the Time Duncan San Antonio Spurs in the early 2000s, Hakeem Olajuwon's Houston Rockets in the "Jordan Plays Baseball" years and the Utah Jazz of the 1990s. But the Warriors felt like something new, as if Steve Kerr and Steph Curry were changing how we all thought about basketball.

The Warriors dynasty as we know it began in 2014 after Mark Jackson was fired and first-time head coach Steve Kerr was brought on. The team finished with an impressive record of 67-15, thanks to their defensive productivity and of course, their insane ability to score -- the three-ball, in particular.

NBA All-Stars Wardell Stephen Curry and Klay Thompson became known as the "Splash Brothers" because of their three-point shooting, and rightfully so -- together, they made 525 three-pointers in the season. Steph Curry won the award for NBA's Most Valuable Player in 2015, averaging 23.8 points and 7.7 assists per game and shooting 44.3% from behind the arc.

One of the key pieces to the team's success was the lineup Kerr chose to play - a lineup smaller than most of their opponents. The lineup consisted of Steph Curry, Klay Thompson, Draymond Green, Harrison Barnes and Andre Iguodala. Green played a pivotal role - he was much smaller than traditional centers. Green was and is such a strong defender that the team's defense did not suffer from the smaller lineup, while being able to disrupt their opponents' game by creating mismatches. The depth of the Golden State Warriors roster continued from there with James Michael McAdoo, Shaun Livingston, Ian Clark, Festus Ezeli, Marreese Speights, Anderson Varejão, Leandro Barbosa and Kevon Looney.

Golden State made their way to the NBA Finals against the LeBron James-led Cleveland Cavaliers, where the Warriors won the NBA Championship in six games. After the 2014-15 season, it looked like Golden State couldn't possibly be stopped for the foreseeable future.

The Warriors began the 2015-16 season looking even better than they did the previous season, as impossible as it seemed. They won 24 games in a row, far surpassing the previous records for best starts (15 games). Once again, they finished the season first in the league with a new record for most wins in a season, an astounding 73 games won.

Curry won league MVP for the second year in a row, averaging 30.1 points, 6.7 assists, and 5.4 rebounds per game while shooting 45.4% from the three-point line. In the postseason, the Warriors defeated the Houston Rockets in the first round of the NBA Playoffs, the Portland Trail Blazers in the second round and the Kevin Durant-led Oklahoma City Thunder in seven games in the Western Conference Finals.

It was inevitable they'd make it to the Finals again, and they found themselves in a rematch against the Cleveland Cavaliers. It seemed like it would be smooth sailing for the Warriors after the first two games, when they won by 15 points and a whopping 33 points. The Cavaliers took Game 3, 120-90, thanks to 32 points from LeBron James and 30 points from Kyrie Irving. Golden State came back with a win in Game 4, bringing the series to 3-1. No team had ever come back from a 3-1 deficit in the NBA finals before and, judging by the level at which the Warriors were playing all season, it seemed highly unlikely it would happen this series. Highly unlikely doesn't mean impossible, though.

How Did the Winningest NBA Team in History Blow a 3-1 Lead? 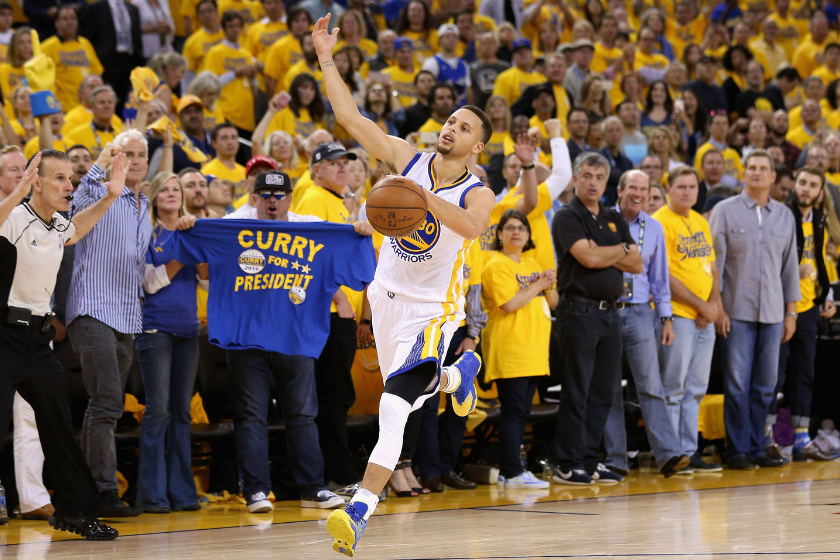 The series was extremely physical with both teams playing extremely competitive basketball. In Game 4, Draymond Green and LeBron James were going at each other continuously. James received a technical foul and Green was assessed a flagrant penalty one for one of his infamous groin hits in the fourth quarter. Green's flagrant foul on James got him suspended from Game 5 due to him racking up so many flagrant "points".

Without Green, the "Death Lineup" wasn't quite as deadly, and the Warriors' defense left something to be desired. Curry and Thompson played well, but the Warriors' lack of defense, and the lack of depth following an injury to Andrew Bogut off the bench, allowed James and Irving to score 41 points each. The Cavaliers defeated the Warriors 112-97, which meant they were back to Cleveland for Game 6. James, never lacking in confidence, finished game 6 with 41 points, 11 assists, 8 rebounds, 4 steals and 3 blocks. Curry added 30 points for the Warriors but fouled out and got ejected for throwing his mouthguard, hitting a fan, in the fourth quarter. The Golden State Warriors were showing their frustration and the cracks were beginning to show.

And then it was time for Game 7. The Warriors were back on their home court, the deafening Oracle Arena (I've been to a Warriors playoff game -- the fans are no joke), hoping to save face and defend their title. The game was a battle, never getting out of reach for either team. Towards the end of the 4th quarter was one of the most iconic moments of LeBron James' career -- the block from behind on Andre Iguodala.

The game was tied, and James made the most clutch, perfect block. I remember screaming so loudly that anyone in the hallway of our hotel probably thought someone was dying. Irving hit a three, then James got fouled and hit one of two free throws, putting Cleveland up by four. Of course, the Warriors wanted Curry to take the last shot, which he did, but it wasn't a great look because of the superb defense from Cleveland. The Cavaliers made history, overcoming a 3-1 deficit and winning the title of NBA champions over the winningest team in NBA history.

How Cleveland Was Able to Come Back 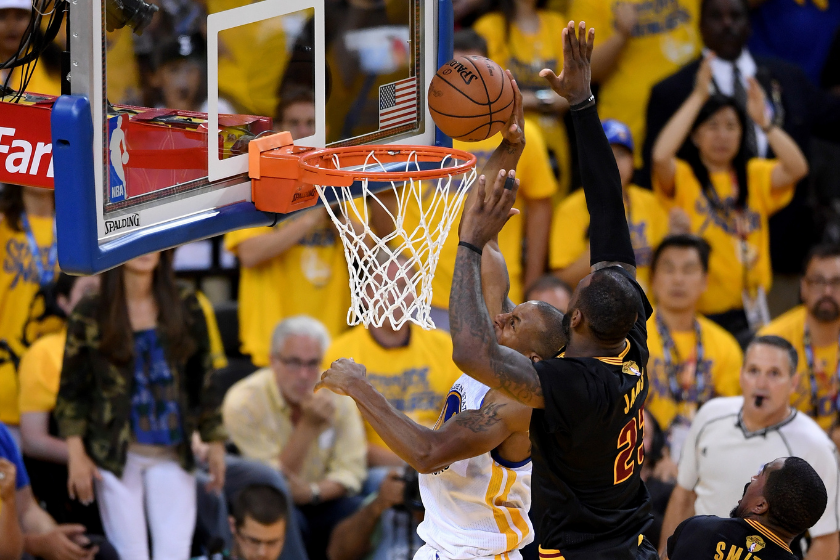 The Cavaliers were somehow (read: LeBron James) able to make this read and set the pace, which meant less opportunity for the Warriors to quickly get up and down the floor for easy layups or go-ahead 3's from the Splash Brothers. The Cavs held the Warriors to under 100 points in three of the seven games, which was nearly unheard of for the Warriors during the regular season.

Another big factor was the Cavaliers' defense. It came as no surprise that much of Cleveland's defensive effort went towards defending both Curry and Thompson outside the arc, but they also did a fantastic job of protecting the rim. This is where the usually successful "Death Lineup" may have really hurt Golden State. Although Cleveland wasn't particularly big, they had enough size in LeBron James, Kevin Love and Tristan Thompson to limit the Warriors' shot-making ability in the paint. The smaller players on the Cavaliers hounded the shooters on the outside, forcing players like Iguodala, Barnes or Green to shoot from the outside. The Cavs' defense was certainly a team effort and it paid off.

Lastly, I think the Warriors were mentally affected by the series. They were the best team in the league, and it wasn't even close, so to have that challenged by the Cavaliers must have had an effect. During the regular season, the Cavaliers finished with a record of 57-25 -- meaning they won 16 fewer games than the Warriors. Golden State's frustration crept into their game, and understandably so -- Curry's ejection from Game 6 was the first of his entire career.

This playoff series was one of the greatest in recent memory and will surely go down in history. Yes, it helped that the Cavaliers were led by LeBron James, the GOAT, to some but certainly one of the greatest players of all time. But the effort put in by the entire team, not excluding coach Ty Lue, was an incredible thing to witness. Don't feel too bad for the Warriors though, they got their revenge on the Cavs the following year...and the next with the help of Kevin Durant.