Maybe it's just me, but I feel the mantra of "let the boys play" has been lost so far in this year's NBA playoffs. Ticky-tack fouls are running rampant -- from a slight nudge to a guy who has inside position on a rebound being called for a foul -- referees are in love with their whistle.

The anchor of the Golden State Warriors defense was ejected from Game 1 of the Western Conference semifinals for a Flagrant 2 foul against Memphis Grizzlies forward Brandon Clarke. Clarke caught a dish from teammate Kyle Anderson near the rim, and Green swiped down hard at the ball -- clearly fouling him -- and grabbed Clarke's jersey as he continued through his shooting motion to ensure the foul would be called on the ground.

Clarke was able to get the shot up anyway, and Green was promptly called for a Flagrant 2 and ejected from the second-round series game.

Was Green rightfully tossed? To me, it should've only been a Flagrant 1, but his foul history throughout his playoff career has put a target on his back.

RELATED: The 10 Players With the Most Technical Fouls in NBA History Prove Playing Rough Pays

Let's go back to Game 4 of the 2016 NBA Finals. The Warriors were up 2-1 against LeBron James and the Cleveland Cavaliers, but Green was given a Flagrant 1 for going after LeBron's groin area following an altercation. Officially, it was for "a retaliatory swipe of his hand to the groin", but yeah, it was a little too close to comfort.

Anyway, the call gave Green enough flagrant points for him to be suspended for Game 5. The Warriors ended up winning Game 4, but the epic "Warriors blew a 3-1 lead" happened from there. Green's controversial flagrant is seen as the turning point.

His Flagrant Fouls During the 2016 NBA Playoffs

It started when he was given a Flagrant 1 for tackling Houston Rockets forward Michael Beasley in the final seconds of Game 3 of the first round.

Then, he was issued a Flagrant 2 for infamously kicking Oklahoma City Thunder center Steven Adams in the nuts in Game 3 of the Western Conference Finals.

That's three points, and his scuffle with James put him over the limit. He blamed himself for the historic collapse after the series despite head coach Steve Kerr singing his praises.

His Recent Foul Record in the Playoffs 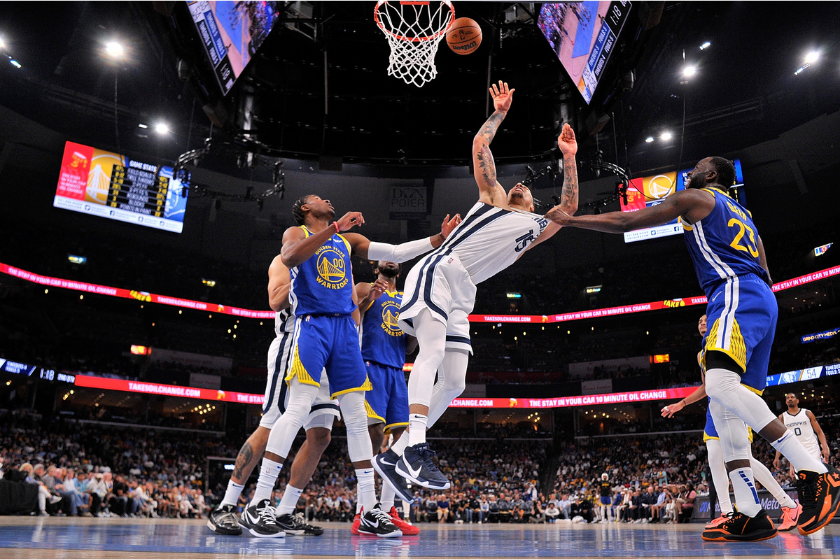 Green also accrued six technical fouls throughout the course of the 2019 postseason. The sixth came in Game 5 of the NBA Finals against the Toronto Raptors. Had he picked up a seventh, he would've been suspended again, per NBA rules. It ended up not mattering as Kevin Durant and Klay Thompson ended up suffering brutal injuries and Kawhi Leonard played like a mad man for Toronto.

That brings us to this year. After his ejection near the end of the first half in Game 1 against Memphis, Green did what all good media members do and hopped on the mic to record an emergency episode of his podcast, "The Draymond Green Show", from his hotel room. He disagreed with the severity of the call and said it was "more of a reputation thing."

Draymond responds to his Game 1 ejection: ?Tonight was a probably reputation thing?pic.twitter.com/DOIc7DOopi

But, that's Draymond being Draymond. Being a pest to his opponents is his identity, and he's clearly willing to suffer the consequences to not sacrifice his game. It's a huge reason why he fits so well alongside Steph Curry and Klay Thompson. They can fire away from beyond the arc, and he'll be the enforcer on the defensive end.

Kerr, Curry, Thompson and Jordan Poole are fine with it, which is what makes him such a vital member of the Warriors. Look no further than Golden State's record without Draymond on the floor to prove his value.

Green missed 36 games this season, including a 29-game stretch from January to March with a calf/back injury. The Warriors record in those games? 19-17. Their record with him? 34-12.

Some might tell Green to cool it out of fear of accumulating more flagrants. I wouldn't count on it, though.

If he played like that, he wouldn't be Draymond Green.

MORE: Ja Morant's Dad Has Always Kept His Son Humble From the Backyard to NBA Playoffs