When you ask yourself who's had the most successful NBA career ever, Michael Jordan, Bill Russell and Kobe Bryant are some of the first to come to mind.

But how about Steve Kerr?

What separates him from the aforementioned names is Kerr has done well in nearly every avenue of professional basketball.

The point guard was a vital member of the Chicago Bulls' second three-peat from 1996 to 1998. Michael Jordan and Scottie Pippen ran the show, but Kerr was a sniper from beyond the arc. He went on to join the San Antonio Spurs in 1999 to help the Texas NBA team capture its first title in franchise history. He helped them win their second in 2003, too, and retired on top.

With the sneakers hung up, the University of Arizona product moved into broadcasting on TNT as a color analyst alongside Marv Albert. But, why not try the front office? He was hired as the general manager of the Phoenix Suns in 2007, and he orchestrated the trade to bring Shaquille O'Neal to the desert near the end of his career as one last hurrah for the "Seven Seconds or Less" era. He stepped down in 2010 and returned to broadcasting.

He's played on the court. He's been in the broadcast booth. He's been in the front office. The only thing left was a coaching career. Kerr was named the head coach of the Golden State Warriors in 2014 and led the team to a NBA championship in his first season. He managed the core of Steph Curry, Klay Thompson, Draymond Green and Kevin Durant to two more titles in 2017 and '18. Under his tutelage, the Warriors have been a powerhouse and look to be one for years to come.

So, how many NBA championship rings does Steve Kerr have? Eight if you've been counting. Let's revisit each one. 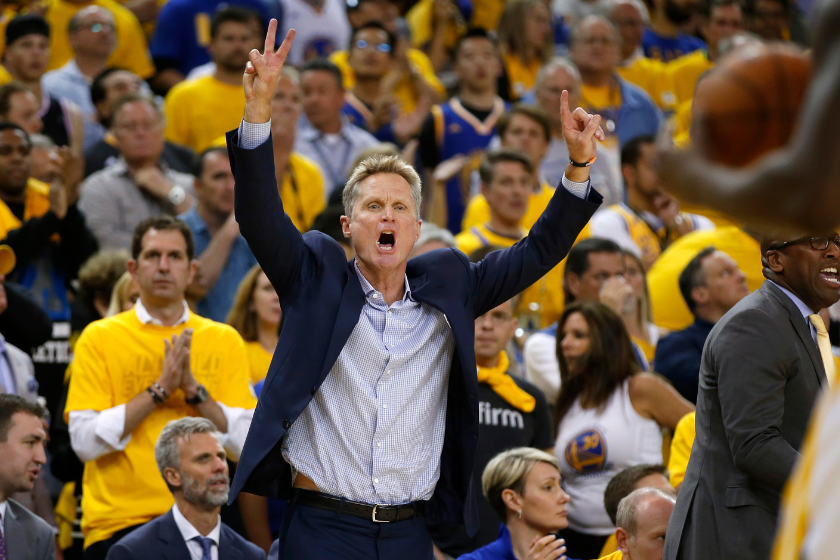 Kerr had established a winning culture in Oakland, but once Oklahoma City Thunder superstar Kevin Durant joined in free agency, they became a juggernaut. The 2017 title was Golden State's to lose, and they didn't disappoint. Kerr sporadically missed time that postseason due to back issues, but he returned to coach the NBA Finals. The Dubs defeated Lebron James, Kyrie Irving, Kevin Love and the Cavs in five games. Their 16-1 NBA Playoff record is the best in league history. 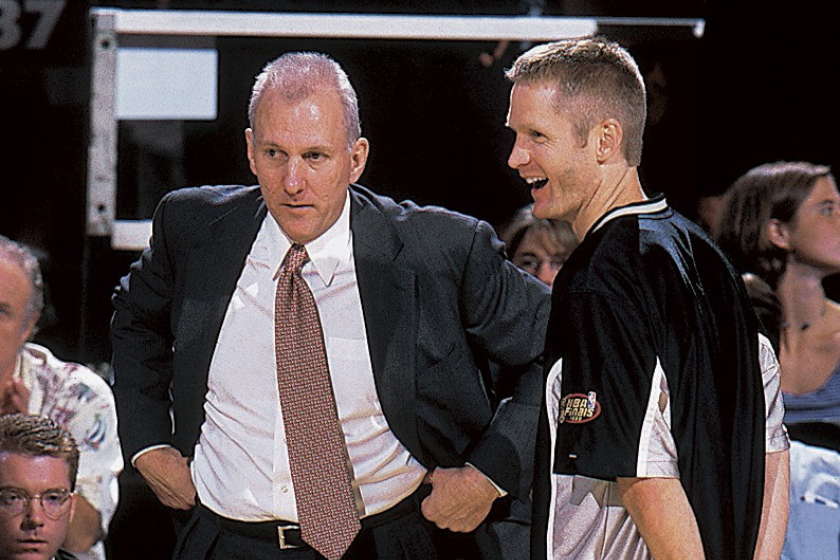 Following the break up of the Jordan-era Bulls, the sharp shooting basketball player was traded to the NBA's next dynasty: the San Antonio Spurs. Led by an up-and-coming Gregg Popovich, a young superstar in Tim Duncan and the 1995 NBA MVP in David Robinson, Kerr brought championship pedigree to the Spurs. He didn't see much action on the court during the lockout shortened 1999 season, but his locker room presence can't be understated.

When the Spurs defeated the underdog New York Knicks in five games in the Finals, Kerr became the second player in NBA history, the other being Rochester Royals and Minneapolis Lakers forward Frank Saul, to win four consecutive NBA championships. 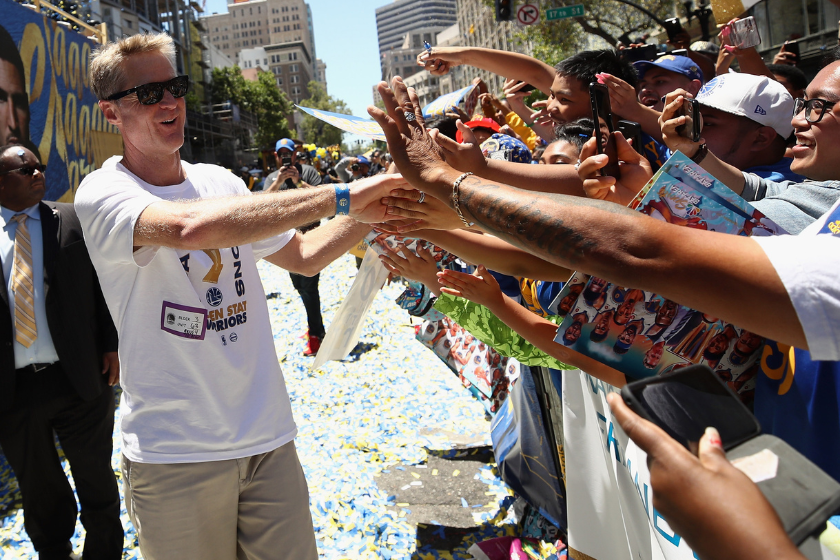 The 2016 NBA Coach of the Year's eighth and most recent title was won using much of the same formula as his seventh. Hey, if it ain't broke don't fix it. Anyway, Golden State was uninterested in the regular season and only won a measly 58 games, but once the playoffs rolled around, they kicked it into gear. The Houston Rockets nearly pulled off an upset in the Western Conference Finals, but Chris Paul's hamstring injury significantly hurt their chances.

The Dubs beat Houston in seven and swept the Cavs in their fourth-straight Finals matchup.

Kerr had a brief stint with the Portland Trail Blazers after spending two seasons with the Spurs. However, San Antonio brought him back for the 2002-03 campaign to serve as a shooting threat off the bench. He saw action in nearly every contest of the regular season, where they finished 60-22 and finished in first in the Western Conference, but didn't see any significant playoff minutes until the Spurs needed him in Game 6 of the Western Conference Finals against the Dallas Mavericks.

The shooting specialist hit four three-pointers in the second half to lift the Spurs to a series win. They eventually beat the New Jersey Nets in the NBA Finals in six games, with Kerr scoring eight points in 19 minutes throughout the series. He called his playing career quits after the season as a five-time NBA champion. It wouldn't be his last, though. 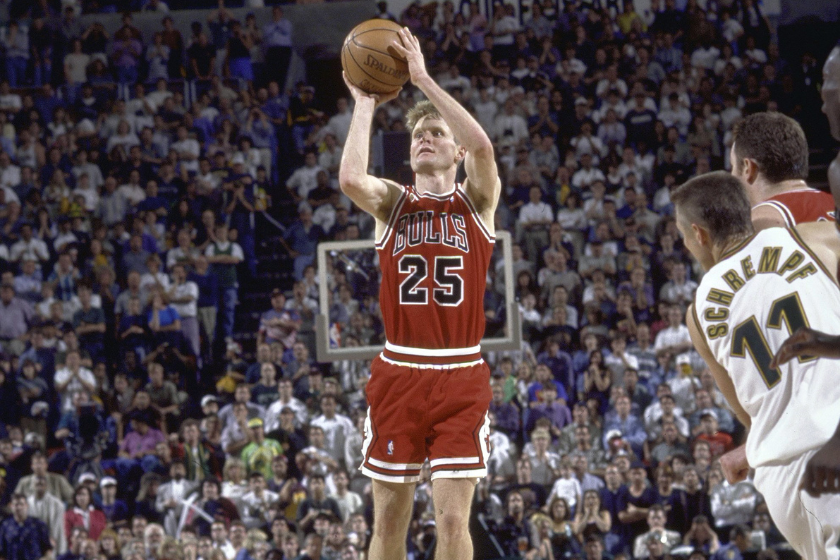 Kerr was traded to Chicago from the Phoenix Suns, the team he was drafted by in the second round of the 1988 NBA Draft, after the Bulls won the '93 title. His first few seasons in the Windy City were played without Michael Jordan as he was off playing baseball, but when MJ returned to the team, Chicago was once again the favorite. Kerr ended up playing every game that season, shooting 51.5 percent from three and a ridiculous 92.9 percent from the free throw line.

Kerr was a vital contributor off the bench during the playoffs and helped extend the court with his shooting stroke. The Bulls beat the Seattle Supersonics in six in the NBA Finals. The late '90s were pretty great for Kerr, and it all started here. 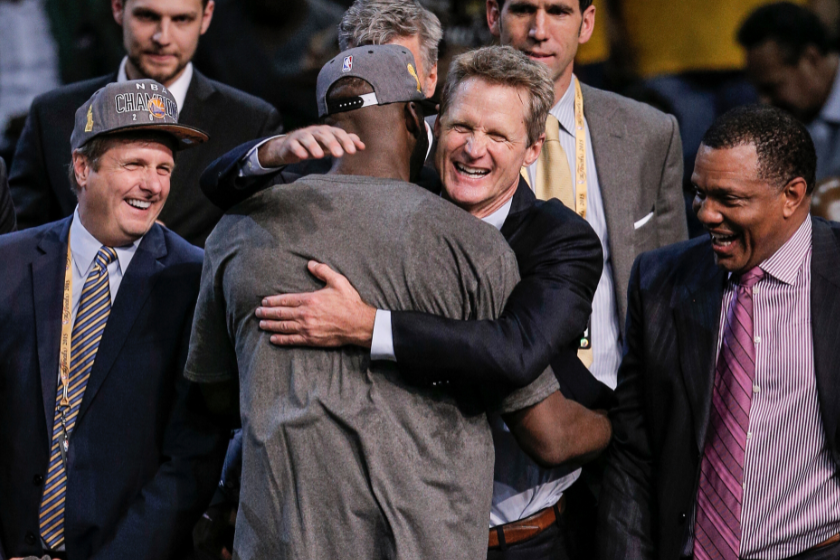 I'm not saying Steve Kerr is directly responsible for the rise of Steph Curry, but when he arrived in the bay area, Curry rocketed to another stratosphere. In his first of two consecutive MVP seasons, Curry greatly benefited from Kerr incorporating offensive aspects from his previous coaches. He brought elements of the triangle offense from Phil Jackson, the spacing of Poppovich and the speed of Mike D'Antoni, who was the head coach of the Suns when Kerr was the GM.

All these worked wonders with the young core of Curry, Thompson, Green and Harrison Barnes. Plus, veteran NBA players like Andre Iguodala, Shaun Livingston and David Lee were great fits off the bench. Golden State beat the Cleveland Cavaliers in six games in the Finals in what would be the first of four-straight matchups.

Kerr played a similar role this season as he did the previous, averaging around 23 minutes and eight points per contest. But that doesn't matter because the point guard's greatest moment as a Bull came in Game 6 of '97 Finals against the Utah Jazz. Knotted up at 86 with 28 seconds left in the fourth quarter. Everyone in the United Center figured Michael Jordan would take the last shot. That is, everyone but Michael Jordan. Jordan told Kerr to be ready if he got double teamed and what do you know? He got double teamed. MJ kicked it to Kerr with the shot clock winding down, who hit an 18-footer to win the game, series and NBA title.

He hilariously recalled the play at the victory parade in Chicago.

Repeating is hard, three-peating is insanely hard. The point guards role as a deadeye shooter only continued the next season, when he shot 44 percent from three on 3.5 attempts per game. In this year's Finals, once again against the Utah Jazz, Kerr returned the favor to Jordan in Game 2, as any good team leader would. Kerr missed a pull-up three in the final minute, snagged the rebound, and dished it to Jordan underneath, who converted the bucket and got fouled.

The three-point play effectively put the game away and silenced the Salt Lake City crowd, and the Bulls ended up winning the series in six games. The title was secured in Game 6 with one of Jordan's many legendary playoff moments.

Some of the greatest NBA figures of the last 30 years have all won with Steve Kerr on their side. He may downplay it, but the evidence speaks for itself: wherever he goes, winning follows.

MORE: Draymond Green's Foul History in the NBA Playoffs Has Refs Eager to Blow Their Whistle