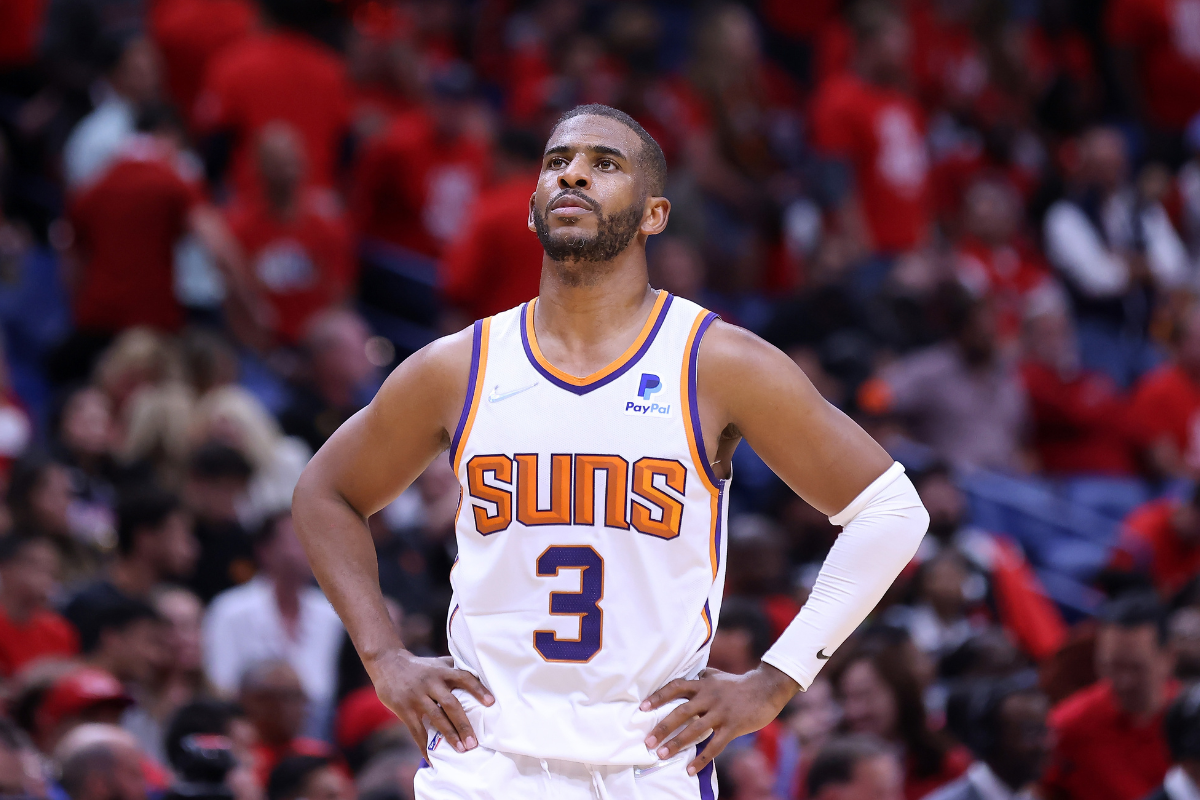 Phoenix suns point guard Chris Paul has done alright for himself in his 17-year NBA career. 12 NBA All-Star appearances, 10 All-NBA selections, seven NBA-All Defensive team nods, the league leader in assists five times and steals six, respectively, the 2006 Rookie of the Year award, the 2013 NBA All-Star Game MVP and a spot on the NBA’s 75th Anniversary Team speak for themselves.

Looking at all Paul’s accomplished, though, are we sure he’s good? The absence of a championship on his resume, the one and only measurement of success in the NBA, might as well make him Eric Snow.

Paul hasn’t been able to win a title with the New Orleans Hornets, Los Angeles Clippers, Houston Rockets, Oklahoma City Thunder nor Phoenix Suns (so far). But, to his credit, the “point god” makes whatever team he plays for better the instant he steps into the locker room. The fact he led the unassuming 2019-20 Thunder to a five-seed in that year’s Bubble postseason maybe deserves some praise. Maybe.

Yet, Paul hasn’t been able to capture a coveted NBA championship because his body seems to fail him at the most crucial times.

2015 First Round vs. The San Antonio Spurs

The “Lob City” LA Clippers were as exciting as anyone in the league at the time and had all the makings of a championship team on paper. Paul ran the point, J.J. Redick was a deadly shooter, Matt Barnes was a defensive menace and Blake Griffin and DeAndre Jordan were athletic freaks.

The Clips ran into the defending champion San Antonio Spurs in the first-round series of the 2015 Playoffs in what became one of the most electrifying playoff matchups in recent memory. Paul strained his hamstring in the first half of Game 7, but returned, essentially playing on one leg, and hit the game-winning shot to send the Spurs home.

The injury forced the point guard to miss the first two games of the Western Conference semifinals against the Houston Rockets, which were split, but Paul came back in Game 3 and helped lift the Clips to a commanding 3-1 lead. However, Paul wasn’t at full strength, and the Clips collapsed in epic fashion and lost in seven.

The loss of the anticipated Western Conference Finals between the Clips and the up-and-coming Golden State Warriors can’t be directly pinned on Paul’s hamstring injury. But, if he were healthy, there’s no way they fall to the Rockets.

2016 First Round vs. The Portland Trail Blazers

The “Lob City” era effectively ended in Game 4 of the 2016 first round. Chris Paul broke his hand while successfully stealing the ball from Blazers guard Gerald Henderson in the second half. Griffin then hurt his quad in the fourth and was ruled out for the remainder of the playoffs.

LA held a 2-2 lead at the time, but dropped Games 5 and 6 without their two stars. I don’t see the Clippers making it deep even with those two guys healthy, as it was a frustrating season and the roster had run its course, but they would’ve put away Portland at the least.

Paul and James Harden piloted Mike D’Antoni’s high-octane offense during the 2017-18 season. Although the Rockets secured the No. 1 seed in the Western Conference, there was no question the big bad Warriors consisting of Steph Curry, Klay Thompson, Kevin Durant and Draymond Green were the superior team. But, when the two met in the Western Conference Finals, Houston gave Golden State all they could handle.

That is until the series had a monumental shift in Game 5.

With the series tied 2-2, the Rockets held a 95-94 lead with under a minute remaining. Paul drove the lane, attempted a floater, and boom — he hurt his hamstring. Houston held on to win the game 98-94, but Paul was ruled out for the remainder of the series. Big game James Harden would need to go nuclear for them to stand a chance.

Harden played well, but these were the freaking KD/Steph Warriors. Chances were already slim with Paul. Without him, it would take a miracle. The Warriors took Game 6 at Oracle Area and closed out the series in Houston. It certainly didn’t hurt them that the Rockets missed a NBA Playoff record 27-straight three-pointers in Game 7.

The loss was brutal not only because Paul got hurt in his first trip to a Conference Finals, but his team had a great shot to win the whole thing had he stayed healthy. Plus, for once, the Warriors actually seemed beatable.

2021 First Round vs. The Los Angeles Lakers

In his first season with the Phoenix Suns, Paul hurt his shoulder boxing out against the LeBron James-led Los Angeles Lakers in the first round. He didn’t miss any time because of the injury, but he clearly wasn’t 100-percent. Phoenix wound up making the NBA Finals — Paul’s first appearance of his career — but they lost to the Milwaukee Bucks in six games.

There must be something with the springtime that causes Chris Paul‘s body to deteriorate. Maybe it’s the extra intensity of the playoffs, maybe he’s just unlucky. Paul, Devin Booker, Deandre Ayton, Mikal Bridges and the guidance of head coach Monty Williams give the Suns all the pieces to win it all this year, but if Paul gets hurt again — and he already suffered a thumb injury earlier this season — I’ll be convinced he’s cursed.

MORE: Draymond Green’s Foul History in the NBA Playoffs Has Refs Eager to Blow Their Whistle