There comes a moment in every dad's life when must look himself in the mirror and accept the days of beating his son in sports are over. That day was never happening on Dave Cambridge's watch.

Cambridge, 49, tested positive for anabolical steroids, HGH and a low-grade beaver tranquilizer after his son beat him in a best-of-3 series in driveway hoops. Zach Cambridge, 12, beat his dad 11-10 and 11-5 in Games 1 and 3 to claim the series. Dave was able to equal the series in Game 2 with a 15-13 overtime win and enjoyed a victory beer to celebrate, but he nearly passed out after the opening possession in Game 3. He then called an impromptu 20-minute timeout to rest and used the time to bask in the beauty of his freshly mowed lawn.

Once the game returned to action, Zach used his speed and newly improved left hand to win the whole thing. Following the loss, neighbors claimed to hear Dave yell expletives unrelentingly for the following five minutes. After his outburst, he laid down on the pavement in disbelief. Witnesses say they saw tears streaming from Dave's eyes, but he vehemently claims it was just sweat.

Three days later, Dave challenged Zach to a rematch. He was looking spry, his bench max had increased by 100-pounds and he was dunking like he did once when he was drunk in college (or so he says). Dave crushed Zach 11-2 and 11-4 this go around, saying things like "This is what you get for messing with the big dog," when backing his son down in the post and slamming it on him a la Shaquille O'Neal and Chris Dudley.

Naturally, Zach was not only taken aback by the loss, but by the fact his dad went from a husky fella to a ripped demigod in three days' time. He told his mom, who reminded him of Section B, Paragraph 4, footer 2 of their neighborhood's Home Owner's Association contract:

"Any son who has reason to suspect his dad may be using performance-enhancing drugs to better his driveway basketball game can subject him to a drug test administered by the HOA. However, the son must submit pictorial evidence." 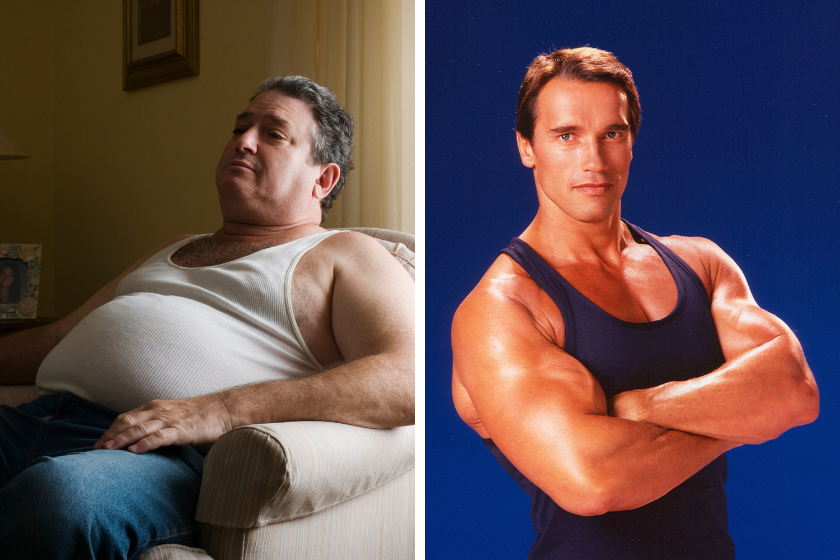 Dave Cambridge before (left), after (right)

The next day, HOA officials arrived at the Cambridge household. The results, to everyone's surprise, were positive. Per Section B, Paragraph 4, footer 3 the punishment is as follows: "If a father tests positive for performance-enhancing drugs, he can't work the grill at that year's block party, he must abstain from watching Sunday golf for a month, instead, he must watch and discuss whatever Bravo show his wife is currently binging, he must take his son to a NBA game and he must deliver an apology to the whole family."

"I come to you as a broken man," Dave started. "First and foremost, I have to apologize to Zach. Zach, you beat me fair and square. There comes a time in every dad's life when he must concede athletic competition to his son. I thought the day would never come, but here we are. My competitive fire that burns with the energy of 1,000 suns wouldn't allow me to submit. I reached my lowest low. Even though the PEDs made me feel what I can only describe as pure, unfiltered ecstasy, that's not who I am.

Dave Cambridge's story shows that we're all human, and humans make mistakes. Dave appears to be back on the right track. He'll have to stay strong and remember this moment once Zach can beat him in golf.