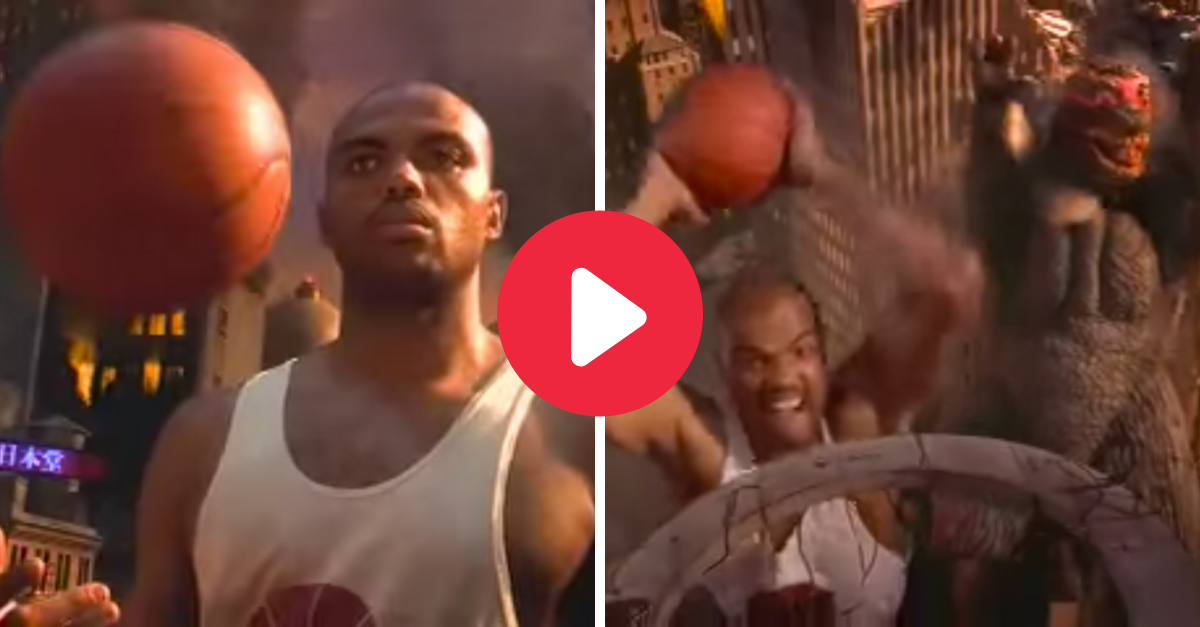 Charles Barkley is an all-time basketball legend both on and off the court. After dominating the boards at Auburn University, The Round Mound of Rebound went on to score more than 23,000 points and play in 11 NBA All-Star Games with the Philadelphia 76ers, Phoenix Suns and Houston Rockets.

Simply put, he was a monster with the rock in his hands.

So what happens when a monster basketball player plays one-on-one with a literal building-crushing, terrorizing monster? Before Barkley ever cameoed in Space Jam or starred on TNT’s Inside the NBA, he and Godzilla met on the streets of Tokyo, Japan in 1992 to settle who the best big man in the world was.

Keep in mind that Sir Charles was already a giant name in the basketball world by this time. Barkley won the All-Star Game MVP in 1991 and would win the league MVP two years later. Few men in the game could guard the 6-foot-6 power forward, so he sought out a challenge against the scaly, 400-foot Japanese king of the monsters.

The Nike commercial begins with Godzilla trampling the city of Tokyo before hearing a super-sized Barkley ? he was wearing his signature shoes ? dribbling a basketball his way. Godzilla gives him the eyes, throws on a pair of pink goggles, and it’s go-time from there.

“The God of Destruction” whips his tail and knocks the ball out of Barkley’s hands, only for it to fall back to him. Barkley then charges at him, throws an elbow and pushes Kaiju into a building before slamming a dunk in the hoop (the letter ‘O’ from a ‘TOKYO’ sign on a building).

Chuck’s a good guy, though. The commercial ends with he and Godzilla walking away as friends followed by the Nike swoosh logo.

“The Lakers are looking for a big man,” Barkley tells Godzilla.

An alternate ending features Barkley asking the monster, “have you ever thought about wearing shoes?”

I have so many questions, but the first and most pressing is: BLOCK OR CHARGE???

Let’s be real, Barkley threw an elbow at Godzilla’s face and shoved him aside. The reptilian villain clearly established his position on the court (err… street) and took the charge. One-on-one rules say Godzilla deserves the ball, and I really want to know how a beast with such small arms shoots. Maybe he slaps it with his tail?

On a real note, this commercial was badass. Nike debuted it on Sept. 9, 1992 during the MTV Video Music Awards. They first advertised it with a movie poster. There was even a whole ass movie trailer. The spot was originally meant for just Japanese audiences, but Nike loved it so much they used in the United States.

The idea for Godzilla vs. Charles Barkley was the brainchild of advertising agency Wieden & Kennedy and was produced by Industrial Light & Magic. Director Michael Owens, producer Clint Goldman and Editor Bob Sarles deserve some major props.

I thought I was dreaming that Charles Barkley played Godzilla one-on-one but nope, it happened. pic.twitter.com/B9ORbGcaRr

A year after the Barkley Nike television commercial aired, Dark Horse Comics decided to release a one-shot comic inspired by it called Godzilla vs. Barkley.

Over 20 years ago Charles Barkley beat Godzilla in a game of basketball to save the world. They don't teach this in history for some reason pic.twitter.com/gIxlbsLLOQ

Who the heck is going to make a Godzilla vs. Barkley movie?

In all honesty, we need more commercials starring athletes and giant monsters. How about a basketball game between Michael Jordan and Bigfoot? I’ll take LeBron James over King Kong any day. Steph Curry vs. the Kracken could be interesting, too, but there’s no way Curry gets a clean look.

MORE: ?I Am Not a Role Model? Commercial is Vintage Charles Barkley