I love Adam Sandler. There, I said it.

There is no one -- and I mean no one -- who can play a manic character as good as "The Sandman". It's what made me fall in love with him in the first place. "Billy Madison", "Happy Gilmore" and "The Waterboy" were essentials as a young lad, and "Happy Gilmore" in particular made me into the man I am today.

But, Sandler is more than just the guy people love to watch freak out. He has range, too. "The Wedding Singer", "Punch-Drunk Love", "Click" and "Uncut Gems" show he can learn life lessons and be a slimy, degenerate gambler who insanely includes the opening tip as part of a parlay.  If "Uncut Gems" showed us anything besides how sad and fucked up Howard Ratner is, it also showed us how much Sandler loves basketball.

Sandler is clearly a hoop head as evidenced by how he includes basketball whenever he can in his movies and how he consistently plays pickup in the baggiest shorts you've ever seen. However, his latest endeavor, Netflix's "Hustle", is the first time he's starred in a movie all about basketball.

For the sake of brevity, "Hustle" (which Sandler co-produced with LeBron James and Maverick Carter) is about Stanley Sugerman (played by Sandler), a scout for the Philadelphia 76ers who is tasked with finding the team's missing piece in order to achieve his dream of becoming an assistant coach. That missing piece is Spanish hooper Bo Cruz (played by Utah Jazz forward Juancho Hernangomez). Directed by Jeremiah Zager, the supporting cast also features Queen Latifah, Robert Duvall, Ben Foster and Heidi Gardner.

I watched "Hustle" on Tuesday and loved it. It has the classic underdog sports movie structure. There are training montages, Cruz is easy to cheer for and being set in Philly, they'd be remiss not to include a homage to "Rocky". Plus, Sandler delivers a performance that shows his passion for the project. Most of all, this movie is pretty much all hoops. Sure, there are familial plot lines in there, but those are interjected in minute spurts, and then it's back to basketball.

What separates "Hustle" from other basketball movies are the cameos. Seriously, think of a prominent NBA figure and they probably appear at some point. Some, like "Inside the NBA's" Kenny Smith and Minnesota Timberwolves star Anthony Edwards, even act in vital roles. That's what I'm here to talk about.

Every good GM puts their people in positions to succeed. In this case, the GM was Sandler, and he cast Smith and Edwards in roles you wouldn't expect. 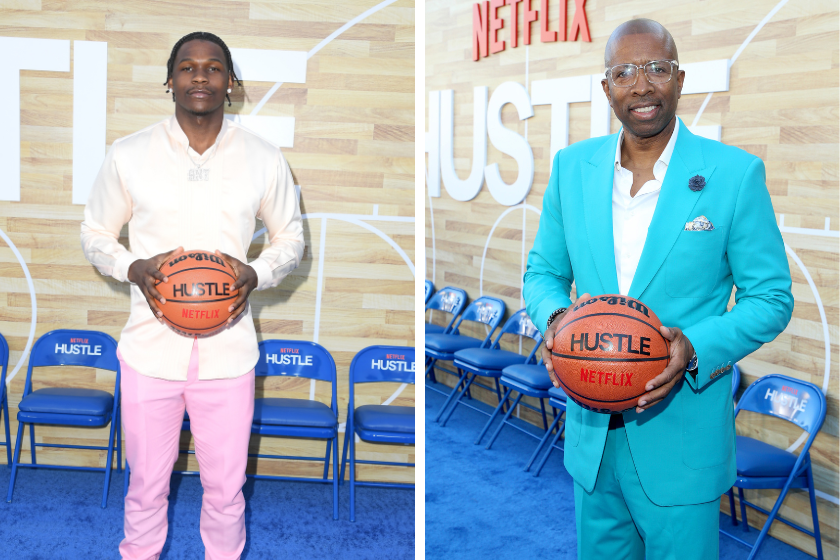 RELATED: 'Hoosiers' Hit Theaters 35 Years Ago. Where is the Cast Today?

First off, I have to say that I'm a big fan of guys you love to hate in movies. Think any prick -- particularly Roy Stalin in "Better Off Dead", Teddy Beckerstead in "One Crazy Summer" and Sack Lodge in "Wedding Crashers" -- and I probably love them. Those guys are hilarious to me. However, Kermit Wilts (played by Edwards) in "Hustle" is different. He's the projected number two overall pick out of Kentucky and still shows up to random workouts and the NBA Draft Combine because he wants to be the top pick. (It's a movie, so I can dismiss the idea that any top prospect would be crazy to attend these events). That being said, his sole reason for existing in the "Hustle" universe is to antagonize Cruz, and I'm here for that.

Seeing how Edwards is a happy-go-lucky, hilarious guy in real life, he played the villain role seamlessly. I'm guessing the reason he's a prick to Cruz is that he's stealing his spotlight, but we get no explanation. He's simply a cocky son-of-a-bitch who's there to get under Cruz's skin, which is funny in a vacuum, but less funny when he's picking on our main guy. I'm a Timberwolves fan, so I love Edwards, but he made me want to punch him in the face as Wilts. That, my friends, is the man who will not only lead the NBA in scoring one day but also a man who I insist wins the MTV Award for Best Villain (maybe an Oscar, too).

Then there's Kenny Smith. Smith plays Sandler's college teammate turned super agent Leon Rich. Now, Smith is known as the king of board racing on "Inside the NBA" and can be the butt of jokes, but, here, he shows off his comedic chops during a poolside scene in Spain. His primary job is serving as the middle man between Sugerman, Cruz and the larger NBA community, and he's believable through it all. I'm sure being an ex-player NBA himself, as Rich is in the movie, helped Smith prepare for the role.

Sandler could've gone with any actors to play these roles. The fact that he went with two notable, real-life basketball figures and got them to give good performances is a wink to hoop fans and a testament to his eye for talent.

At the end of the day, "Hustle" will be a comfort watch for me. It's what I look for in a sports movie: fun, characters to cheer for and triumph. Sandler and the bajillion cameos, specifically Edwards' and Smith's parts, are the cherry on top.