Happy Gilmore remains one of the great all-time golf movies. Released 25 years ago on February 16, 1996, the treasured flick was a comedic sensation in theaters for sports (and non-sports) fans across the world.

Adam Sandler played a failed ice hockey player who turned the world of professional golf on its head by driving the green on par-5 holes and dropping F-bombs when he couldn't sink a putt for his life. C'mon, who can forget our favorite golfer screaming at that poor white dimpled ball for not simply going in its home?

Everything about Happy Gilmore is pure genius. From the rivalry with villain Shooter McGavin (played by Christopher McDonald) to showing his soft side by saving his grandmother's house (and getting her the heck away from Ben Stiller), it was tremendous from start to finish. It's no wonder director Dennis Dugan's film grossed $41.2 million and became a 1990s classic.

Let's not forget that cast, either. Julie Bowen starred as Happy's love interest and journalist Virginia Venit. Predator and Apollo Creed star Carl Weathers as Chubbs Peterson (that damned alligator!). Richard Kiel as Mr. Larson AKA the man with the nail in his head. Ben Stiller as the nasty nursing home manager Hal L. and even Bob Barker, who showed Happy the price was wrong when he punched his lights out.

Even Happy's caddy, Otto, played a heck of a role without ever saying much yet hilariously picking up quarters on the green whenever possible. Who was that bearded, bushy man on the golf course and what's he up to 25 years after carrying Happy's clubs?

Who Is Happy Gilmore's Caddy? 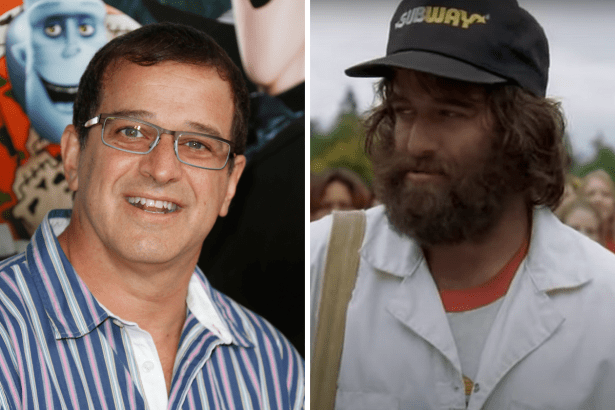 Happy Gilmore's bearded caddy, Otto, is played by actor Allen Covert. Covert most prominently starred in Grandma's Boy (2006) and doesn't have an ounce of facial hair in real life.

Happy Gilmore discovers he needs his own caddy for some of the more elite golf tournaments he plays in. That's when he recruits a homeless man who washed his car windshield in the parking lot to come along.

The idea of a homeless, unkept man serving as a professional's caddy is already hilarious. Covert's role picks at the little facets of golf to make us laugh, like picking up a coin on the green that was being used as a marker for another player's ball. There's even a scene of Otto bathing in one of the course's ponds.

And who can forget that beer helmet that would make a terrific Halloween costume?

Do you know that the first hipster was Otto the Caddy from Happy Gilmore? pic.twitter.com/M1LVtv3frN

Happy's first encounter with a provided caddy doesn't go smoothly. When Happy's Waterbury caddy (the blonde boy played by Jared Van Snellenberg) takes his clubs without asking, Happy throws him to the ground and asks, "where are you going with those clubs, punk?"

Eventually, though, Happy begins to get the hang of things after a few rounds.

Where Is The Caddy Now?

Allen Covert was just 31 when he played Otto, but he's been featured in many movies since then.

In 2011, Covert even brought back his famous role as the homeless Otto in the Sandler movie Jack and Jill (2011).

So, why does Allen Covert have so many cameos in Adam Sandler's movies? The two go way back. Covert and Sandler both were classmates at New York University. Covert ended up having some sort of hand (performer, writer, producer) in nearly every movie Adam Sandler starred in.

Adam Sandler may have come a long way from Saturday Night Live and Billy Madison (1995), but he's had his right-hand man by his side the entire way.

MORE: Then and Now: The Cast of 'Caddyshack' 40 Years Later