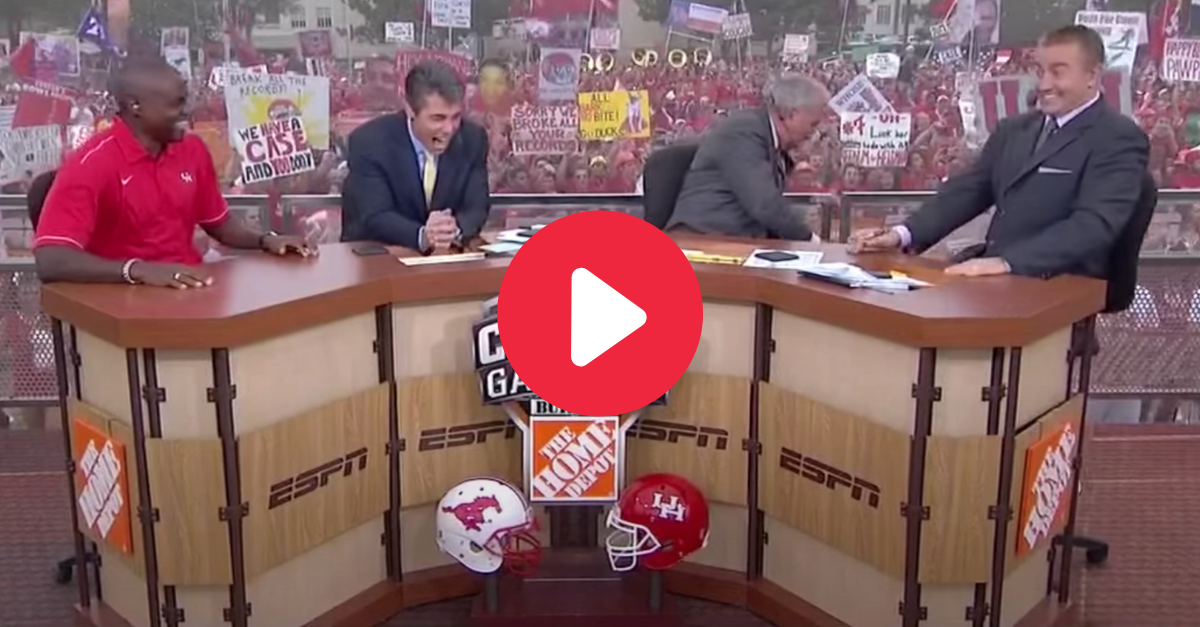 Lee Corso is a national treasure. From his headgear picks on ESPN’s ‘College GameDay” to his overall zest for college football and life, it’s always a treat watching him on Saturday mornings in the fall. He’s had some classic moments over the years, too, but one moment truly takes the cake.

For the Houston Cougars, the 2011 season was a magical ride. They had the best offense in the country — scoring nearly 50 points per game under head coach Kevin Sumlin — and a 13-1 record with a Cotton Bowl victory was the result. It was a fun time, no doubt, and there was no bigger party than when ESPN’s College GameDay came to town.

The show was a blast. Everyone was in a good mood and Olympic legend Carl Lewis was the guest picker. Then Corso brought it home by dropping an f-bomb on national television.

At first, Lee Corso grabbed a SMU megaphone, maybe hinting that an upset was brewing. Then, out of nowhere, Corso tossed the megaphone, said, ?AH, F? IT!? and put on the University of Houston mascot head.

The crowd went wild, while co-hosts Chris Fowler and Kirk Herbstreit and guest picker Carl Lewis were all shocked. Corso had just dropped an f-bomb on live television and their reactions were priceless.

?Shasta, shame on you! Wash that mouth out,? Fowler added.

It was Live TV gold at its finest hour, but there was obviously some backlash. So during a break of a game between Nebraska and Michigan, Corso issued a public apology.

“Earlier today on College GameDay, I used an expletive I shouldn’t have. I apologize and promise it won’t happen again.?

The apology was accepted.

As for the SMU-Houston game, Corso made the correct pick. The Cougars dismantled the Mustangs, 37-7, at Robertson Stadium.

That moment, however, will never stop being funny.

MORE: Kirk Herbstreit?s Net Worth: It Pays to Be College Football?s Top Analyst