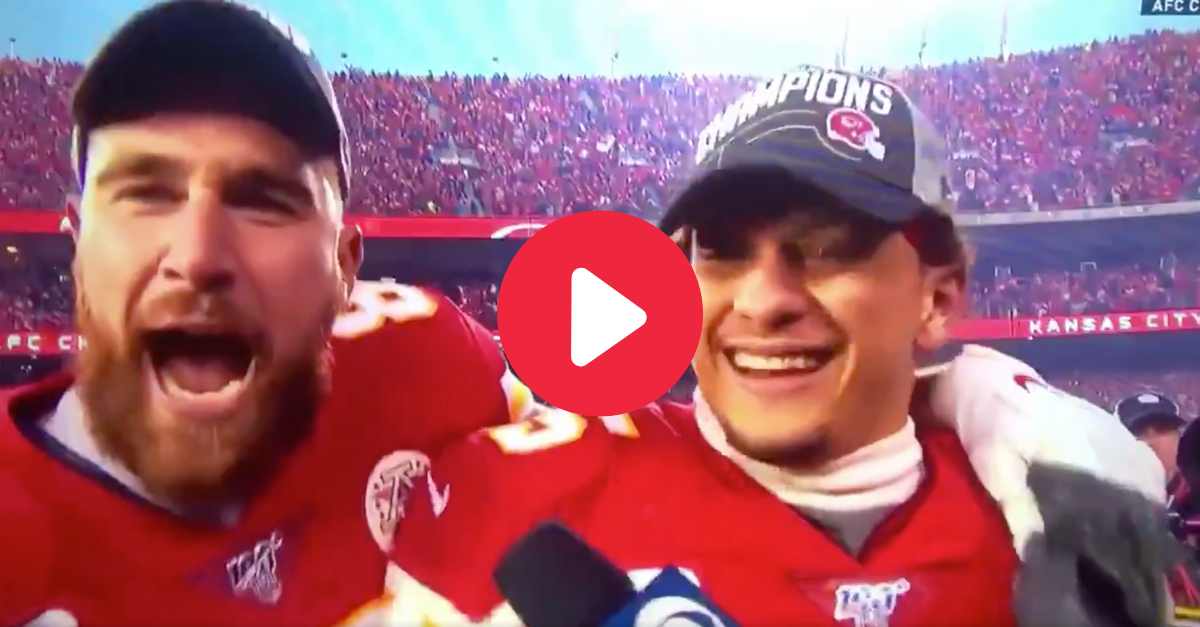 The Kansas City Chiefs are headed to their first Super Bowl in 50 years. It?s been a long time coming for the NFL franchise, but it?s finally happening again. There were tons of happy fans inside Arrowhead Stadium on Sunday afternoon, and All-Pro tight end Travis Kelce definitely led the pack.

The win over the Tennessee Titans in the AFC Championship Game was sweet. A big reason for that was the play of Chiefs quarterback Patrick Mahomes. Naturally, the reigning NFL MVP earned the CBS postgame interview with sideline reporter Tracy Wolfson, but not before Kelce crashed the party.

Not only did he disrupt the interview, but he also dropped an F-bomb on live TV.

Travis Kelce interrupts Patrick Mahomes interview to hype him up.. "I fucking love you" pic.twitter.com/85UaXoO6Wv

For the Chiefs, getting to Super Bowl LIV in Miami was the goal all season. All that?s left is a matchup with the San Francisco 49ers ? the NFC champions who took down the Green Bay Packers ? to run through the NFL playoffs and hoist the Lombardi Trophy.

Chiefs fans are ecstatic. So are the players and everyone in the organization. That?s why Kelce, a five-time Pro Bowl selection who caught three passes for 30 yards, was pumped after the game.

He also wanted to tell the world how much he loves his quarterback.

?The best quarterback in the National Football League right here, baby and, he shows it every time. Humble as can be, baby. I f?ing love you!?

That?s probably not what the executives at CBS wanted to hear, but who can blame Kelce for letting out some raw emotion in front of millions of people?

Kelce wasn?t done, either. Although he didn?t score a touchdown while Mahomes, Tyreek Hill, Sammy Watkins and Damien Williams did that damage for Andy Reid, Kelce wanted to tell the world how much he earned the right to party.

The Chiefs defense has held its own during the playoffs, too. Frank Clark and company shut down the Houston Texans last week and held Titans running back Derrick Henry, the league?s leading rusher, to just 70 rushing yards.

But nobody on the team has a bigger personality than Kelce and he showed it.