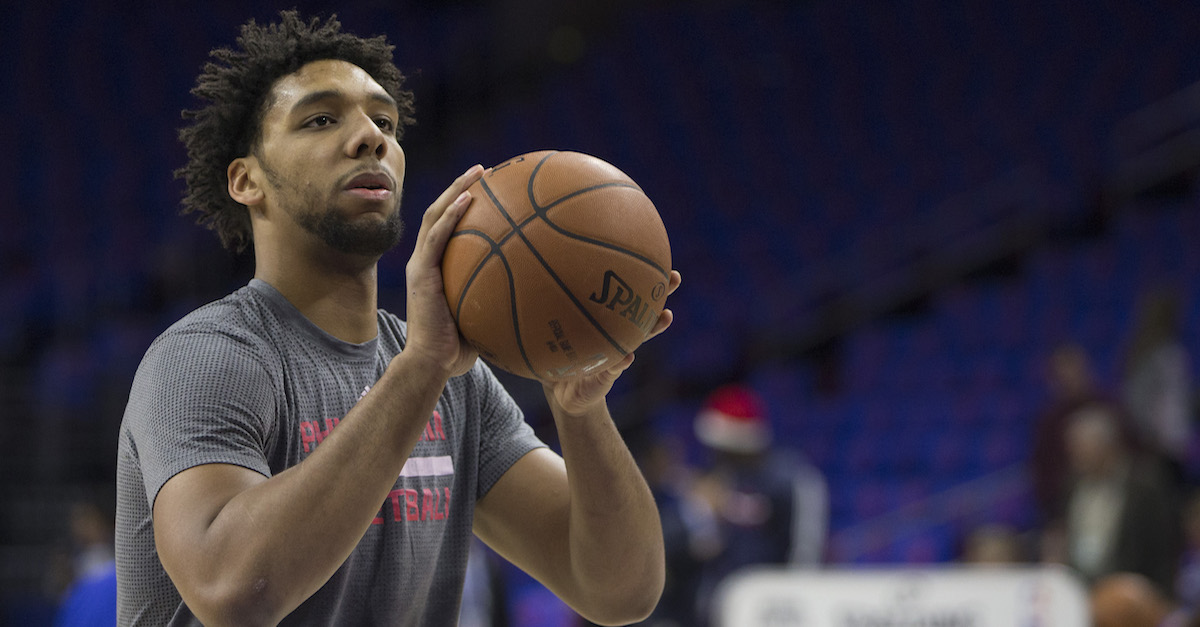 Mitchell Leff/Getty Images
PHILADELPHIA, PA - OCTOBER 30: Jahlil Okafor #8 of the Philadelphia 76ers warms up prior to the game against the Utah Jazz on October 30, 2015 at the Wells Fargo Center in Philadelphia, Pennsylvania. NOTE TO USER: User expressly acknowledges and agrees that, by downloading and or using this photograph, User is consenting to the terms and conditions of the Getty Images License Agreement. (Photo by Mitchell Leff/Getty Images)

Philadelphia 76ers center Jahlil Okafor told reporters on Wednesday that he would like a trade or a buyout from the team. The request from Okafor comes just one day after the team decided against picking up his fourth-year, $6.3 million player option.

As it stands now, Okafor will become an unrestricted free agent next summer.

It has been quite the season for Okafor so far. Sixers head coach Brett Brown told reporters last week that Okafor is out of the rotation and that he will be playing veteran Amir Johnson ahead of Okafor in the lineup. Okafor has appeared in just one game this season after logging 22 minutes against the Toronto Raptors on October 21.

Multiple reports have surfaced recently stating that Okafor and his camp are working with the 76ers on a trade that would benefit both sides. As the two sides look to come to a resolution, here are some teams that could benefit by adding Okafor either through a trade or free agency should he agree to a buyout with the 76ers.

The Nets have made it no secret that they are in the midst of a rebuild. The team’s previous management team led by Billy King left the team in a devastating hole without many assets, cap space or a promising player to build around.

Sean Marks has taken over as general manager and has been tasked with improving the team. Marks hasn’t had much to work with since taking over last year, but appears to be making the most with what he has. With his approach to collecting young players and assets, the Nets could be an interesting team to watch in the Okafor sweepstakes.

The Nets would appear to have an opportunity for playing time for Okafor and could be the place that turns his career around.

The best landing spot for Okafor would likely be a team that has plenty of playing time to offer and the Bulls have just that to offer. The Bulls are attempting to rebuild around young players like Jerian Grant, Kris Dunn, Lauri Markkanen, Cristiano Felicio and others and Okafor could fit in with the team’s frontcourt.

Of course, the Bulls are dealing with controversy of their own after Nikola Mirotic and Bobby Portis were involved in an altercation during practice. It has been reported that Mirotic or Portis would need to be dealt in order to keep the peace in the locker room and one of them could be offered in a potential trade with the 76ers. It’s unclear if either player interests the 76ers, but it could be an option for the Sixers if they are set on trading Okafor now.

The Hawks are another team that have seemingly given up on the 2017-18 season after switching to a youth movement led by Taurean Prince, John Collins, DeAndre’ Bembry and others.

Okafor could be an option for the Hawks as it does not appear that they have many long-term answers in the frontcourt. The Hawks drafted Collins in June’s draft and will want to build around him and there seems like there could be an opportunity for Okafor to play extended minutes with the Hawks.

Okafor needs to find a situation where he can play consistent minutes on a nightly basis and that could come in Atlanta. He would have the opportunity to learn under a respected head coach in Mike Budenholzer and that could prove to be beneficial for his career.

It’s clear at this point that Okafor wants out of Philadelphia one way or the other, and he’s hoping that comes sooner than later.