Every team is looking for a Jalen Brunson. Why? His presence on your roster boosts your team's chances of winning. Just take a look at his track record. He won a state championship in high school and two national championships at Villanova. This past NBA season, he helped lead the Dallas Mavericks on an unexpected playoff run to the Western Conference Finals as Luka Doncic's No. 2.

Brunson is a basketball artist -- not like Luka, Giannis Antetokounmpo, Kevin Durant or LeBron James -- no, his brushstrokes are avoiding dumb plays. Since I started watching him play in college, I've rarely, if ever, seen him make an egregious mistake. He plays calm, cool, collected and uses his smarts as his primary weapon. He knows he can get to the paint at will, but he's developed a money mid-range jumper to avoid the giants at the rim. He knows his teammates' sweet spots. He knows his defender's weaknesses. Most importantly, he knows how to take care of the ball. There's that common saying of "the way the game should be played," which we hear ad nauseam. But, if any coach could show young players how they should be playing, they would show tape of Brunson.

This past year, he took his game to another level by perfecting his role as another off-the-dribble creator to complement Doncic. At the same time, he skyrocketed his monetary value. Brunson is set to hit the open market as an unrestricted free agent once NBA free agency begins on June 30. Although it would be a dream for the Mavericks to run it back with Brunson, reports indicate the point guard is going to accept a four-year, $110 million offer from the New York Knicks. Not too shabby for a second-round pick's second contract.

However, the Knicks have a tendency to overreach for players, which begs the question: are they paying too much for Brunson?

Jalen Brunson is Worth $110 Million 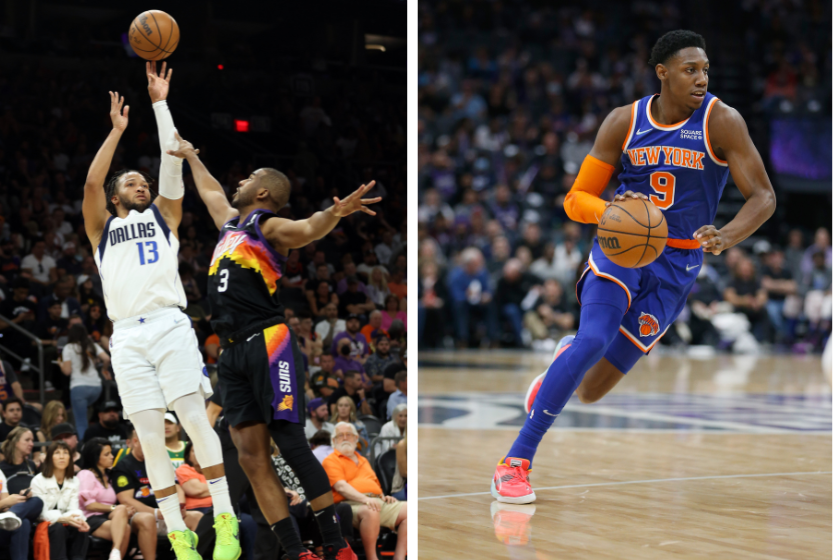 RELATED: John Wall Made $44 Million to Sit Out Last Season, But He's Ready to Prove He's Still an All-Star in LA

Personally, I would move mountains to have Brunson on my team, which the Knicks just did. Last night, New York traded center Nerlens Noel and guard Alec Burks to the Detroit Pistons to clear salary cap space for Brunson, per ESPN. The Knicks also included two future second-round picks and $6 million in cash as the cherry on top. This is the second move to make room for Brunson. The Knicks traded veteran point guard Kemba Walker to Detroit on draft night to shed $30 million in salary.

The Knicks not only made the financial moves to land Brunson, they also made the personal moves. In early June, New York hired Jalen's father, Rick Brunson, as an assistant coach. Rick played nine years in the NBA and served on Tom Thibodeau's staff with the Chicago Bulls and Minnesota Timberwolves. This is the kind of stuff you see college teams pull to land big recruits -- like when Oklahoma State hired Cade Cunningham's brother Cannen.

The Knicks aren't messing around, and they shouldn't be. It's been a long, long time since they were relevant. Yes, $110 million may be a lot for a guy who hasn't made an All-Star team, but I'm telling you, Brunson is DIFFERENT. He's a guy who improves team chemistry the instant he steps into the locker room. A pair of Brunson and budding franchise cornerstone R.J. Barrett is a solid young duo to bet on. Barrett has steadily improved each year, and he'll make a huge jump alongside Brunson. My bold take: Barrett wins Most Improved Player next year.

On the accounting side of things, Brunson's contract isn't as big of a hit as you would think. ESPN's Tim Bontemps reported the salary cap for next season will increase from $112 million to $123.6 million, roughly a 10 percent bump. So, Brunson's projected $27.5 million salary would only take up 22 percent of the team's payroll as opposed to 24 percent. That two percent many not seem like a big difference, but that's $2.44 million, which could be allocated towards signing a veteran.

Sure, Brunson isn't as flashy a name as other free agents like Bradley Beal or Zach LaVine, but that's actually a positive. Brunson is the kind of guy a star player would want to team up with. I mean, look what he did with Luka. Plus, a young core of Barrett, Immanuel Quickley, Obi Toppin and Cam Reddish and a former All-NBA teamer in Julius Randle (who I see having a bounce back year playing with Brunson) -- there's a foundation to build on. The young talent and Brunson's arrival make it even more appealing to a top guy in the future -- say, Nikola Jokic in 2023 (I'm contractually obligated to throw out hypotheticals. I'm spitballin' here.)

New York City will always be the most attractive free agent destination along with Los Angeles. And come on, we're talking about the Knicks here. Their fanbase is massive, they play in the media capital of the world and Madison Square Garden is their home. The NBA is better when the Knicks are relevant. LeBron James even said so himself

Ain?t no denying DIPSET! And the league is simply better off when the Knicks are winning. https://t.co/Zifxs2OtVH

The Knicks have shown plenty of incompetence over the past two decades, but I have to tip my cap to front office leader Leon Rose for this because Brunson is freaking awesome. They might not be done, either. Reports are circulating they might also trade for San Antonio Spurs All-Star point guard Dejounte Murray. I would love to see Brunson give it another go with Luka and the Mavs, but he more than deserves to get his bag.