Last year, John Wall cracked the code by getting paid to not do his job. While that's a dream for anyone in the workforce, Wall somehow surpassed the dream state into Nirvana by turning a workless year into $44.2 million. Some say he's the leader of the antiwork movement, but Wall wouldn't because sitting on the bench wasn't his plan. It was the Houston Rockets'.

Wall, who arrived in Houston from the Washington Wizards via a trade involving Russell Westbrook, was meant to help the Rockets continue to compete for championships alongside James Harden. However, following Harden's forced departure in December 2020, the Rockets slowly punted their contender status in favor of entering a full rebuild. Wall played 30 games that season, but Houston started trading their established veterans in exchange for draft assets and young players.

The Rockets favored developing Jalen Green, the No. 2 overall pick in the 2021 NBA Draft, and Kevin Porter Jr. rather than risk Wall getting injured and diminishing his trade value. So, they decided to bench the five-time All-Star point guard for the entire 2021-22 season even though he was good to go. Sitting out paid off for Wall financially, but now it's going to pay off on the court.

The Rockets have agreed to buy out the final year of Wall's contract after he exercised his $47.4 million player option. He had to forfeit $6.5 million (roughly the same as the taxpayer mid-level exception) in order to hit the open market, but the sacrifice is worth it because Wall has already announced he intends to sign with the Los Angeles Clippers once he clears waivers.

The addition of Wall makes the Clippers contenders once again, but personally, Wall is going to prove he has plenty of All-Star days left. 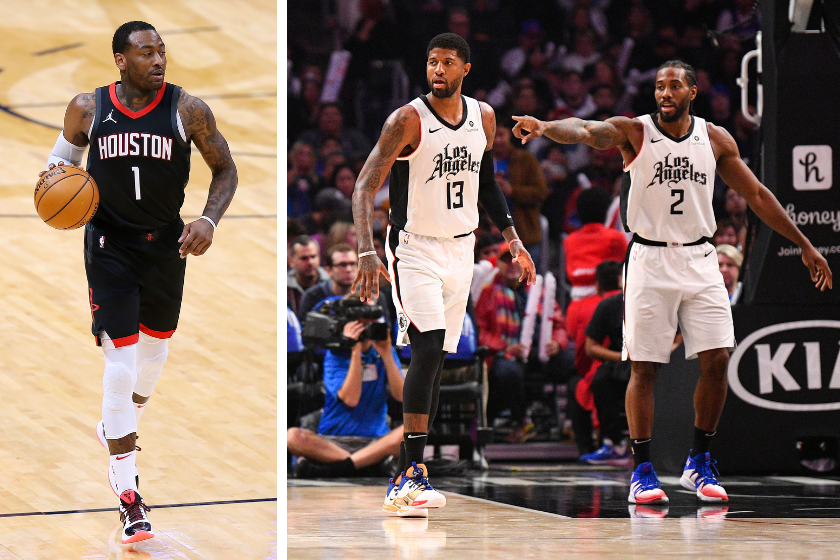 Last season didn't go according to plan for the Los Angeles Clippers. For one, Kawhi Leonard sat out the entire year after tearing his ACL against the Utah Jazz in the 2021 Western Conference semifinals. Then, Paul George suffered a midseason elbow injury that sidelined him for a 43-game stretch. Without their two biggest stars, the Clippers still went 42-40 and earned a date with the Minnesota Timberwolves in the Play-In Tournament. However, their playoff hopes ended after losing to the Wolves and the New Orleans Pelicans. All in all, It was a nice season for LA considering their circumstances.

Now, with a healthy Leonard, George and Wall set to suit up next season -- watch out. Leonard is one of the few true 1A guys in the league (the others being LeBron James (yes, still), Kevin Durant, Giannis Antetokounmpo, Luka Doncic and Steph Curry). He's proven his capable of carrying a championship team. George is a 1B guy who's not far off from 1A. In the 31 games he did play last year, he averaged 24.3 points and 6.9 rebounds per contest. The Clippers would've had a much better chance at making the playoffs had he not tested positive for COVID-19 before the Pelicans game.

Then, there's Wall. It's been nearly five years since Wall has played a full season due to brutal heel and Achilles injuries. But, when he did play for the Rockets, he showed flashes of his old self by pouring in 20.6 points and dishing out 6.9 assists per game. Based on his desire to play last season, as indicated by ESPN's Adrian Wojnarowski, Wall will arrive in LA with a chip on his shoulder.

I envision a blazing Wall leading fast breaks and dishing it to Leonard and George for trailing threes or taking it all the way to the rim. I see Wall slashing while Leonard and George work on the wing. I see Wall beating his man off the dribble and feeding Kawhi and George or dishing lobs to center Ivica Zubac (shall the team pick up his option). Let's not forget the 2010 No. 1 draft pick was a 20-10 machine at his peak in Washington, either. His passing is his top strength, and although he can be prone to turnovers, he's a dynamic playmaker. Sure, he can score, too, which will offer another threat to opposing defenses after Leonard and George, but he won't have to carry the load. Durant proved it's possible to return to an elite level after an Achilles injury. Wall is capable of returning to his former self, too. A new environment should also help.

As of now, the Warriors are tied with the Brooklyn Nets for the third-best odds to win the 2023 NBA title at +700, per The Athletic. The Golden State Warriors are the favorites at +550 and the Boston Celtics are second at +650. The Clippers are more than capable of beating any of these teams at full strength. Yes, these are still the Clippers that have only reached the conference finals once in their 52-year history and blew a 3-1 lead to the Denver Nuggets in the bubble. But, they have three fresh stars and a coach in Ty Lue who's won an NBA championship before.

With the addition of Wall, along with a healthy Leonard and George and a strong supporting cast, the Clippers have the pieces to win their first NBA Finals next year.

MORE: The Moment the 76ers Should Have Known Markelle Fultz Wasn't the Right Pick