No. 4 overall pick has been punished after appearing to make a gun motion at a fan before mouthing, “F**k you” 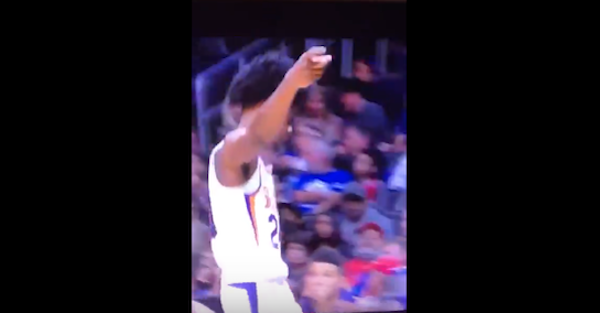 The Phoenix Suns have been pretty horrendous over the first three games of the 2017-18 season, and that’s already in the head of No. 4 overall pick Josh Jackson.

In the fourth quarter of the Suns’ latest loss, Jackson appeared to trigger a gun motion toward a fan before mouthing “f**k you.”

He has since been fined $35,00 by the NBA for “making a menacing gesture on the playing court and directing inappropriate language toward a fan,” the league announced on Tuesday.

The incident occurred with 6:10 remaining in the fourth quarter of the Suns’ loss to the Clippers on Saturday, 130-88.

This is an awful look for the rookie, taken out of Kansas in the first round. The Suns head coach Earl Watson was fired just one day later.

Suns guard Eric Bledsoe also caused controversy of his own with a tweet after the miserable losses.

The 6’8″, 207-pound Jackson has averaged 11 points and one rebound on 36 percent shooting from the field in three starts.

This isn’t the first time an NBA player interacted with a fan, as just a day ago someone recorded Kyrie Irving yelling for a fan to “suck his d**k,” after asking about LeBron.