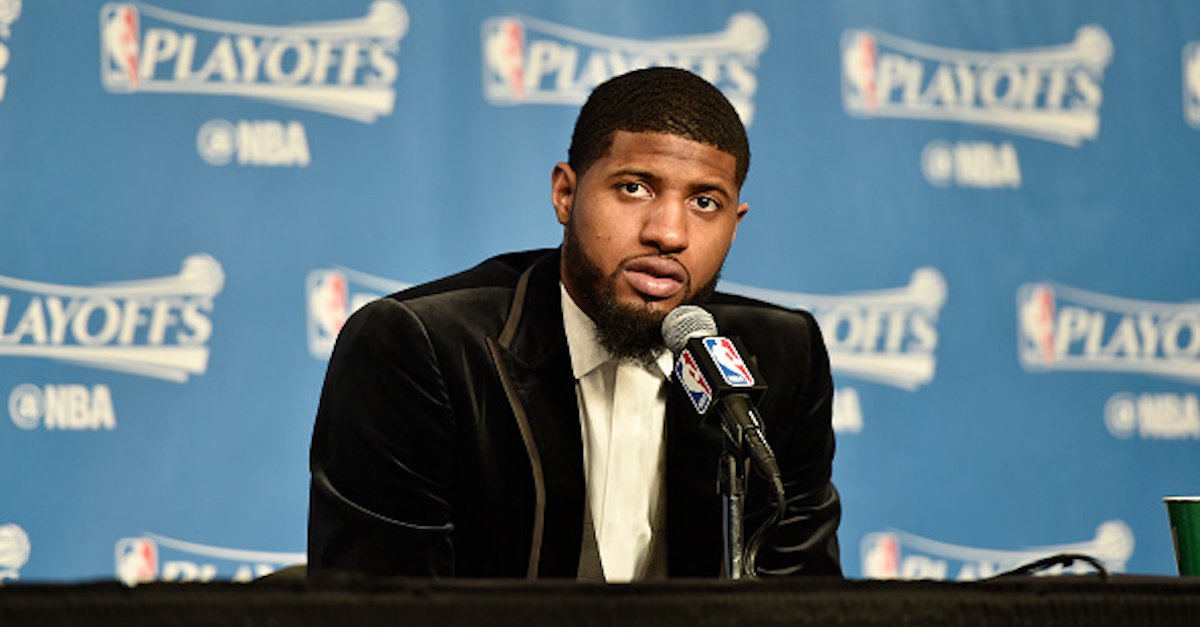 David Liam Kyle/NBAE via Getty Images
CLEVELAND, OH - APRIL 15: Paul George #13 of the Indiana Pacers speaks to the media after a game against the Cleveland Cavaliers in Round One of the Eastern Conference Playoffs during the 2017 NBA Playoffs on April 15, 2017 at Quicken Loans Arena in Cleveland, Ohio. NOTE TO USER: User expressly acknowledges and agrees that, by downloading and/or using this photograph, user is consenting to the terms and conditions of the Getty Images License Agreement. Mandatory Copyright Notice: Copyright 2017 NBAE (Photo by David Liam Kyle/NBAE via Getty Images)

There’s been a lot of buzz this NBA offseason surrounding Indiana Pacers’ star Paul George and the trade block. Ther was also some pre-draft buzz regarding the Los Angeles Lakers and a potential trade for George, and that made sense considering the seven-year veteran is originally from Palmdale, California and he played college ball at Fresno State.

Bringing George back to LA would be bringing him back to California, where it all began, and the Lakers could use an established superstar to put alongside a very young core that currently features Brandon Ingram and the newly drafted Lonzo Ball.

George is heading into the last year of his contract with Indiana, so the conventional wisdom is that the Pacers are trying to shop him in an effort to get some value back for him, rather than watching him walk away in free agency empty handed.

If Indiana can’t get a deal done, though, there’s a very real chance that ends up happening, and though the Lakers could try to put something together in the here and now, why would they?

First of all, they’d have to put together a pretty nice trade package for George, and that’s not the greatest idea for a team that looks to be rebuilding right on track in the post-Kobe Bryant era.

More important, though, is the fact that George is apparently telling his buddies that he’s planning on joining the Lakers in 2018 as a free agent. This, according to a report from Tania Ganguli of the Los Angeles Times, who cites people in the know who aren’t able to speak publically about the matter.

So they’ll speak off the record:

According to people not authorized to speak publicly, George, a Palmdale native, is still telling friends that he intends to be a Laker in 2018. Because of that, he knows the Lakers have little incentive to trade for him now.

This is not to say that another franchise can’t swoop in and make a great trade for George between now and free agency 2018, but keep in mind that any trade will be a short-term one because of his upcoming free agency — unless that team feels it’s able to lock him in long-term once his current contract finishes up.

For the Lakers, that means they’ll likely wait until 2018 to put their name in the hat for George, and that’s probably the better long-term strategy because right now they’d have to give up too much for the four-time All-Star.

Although George?s feelings could change, especially if he is traded to a team he likes, the Lakers aren?t willing to part with too much to trade for him. Second-year forward Brandon Ingram, a favorite of the Lakers? coaching staff, has caught Indiana?s eye, but is off limits. Without the help of a third team, the Lakers weren?t willing to part with the No. 2 overall pick before the draft ? the pick they used to take former UCLA star Lonzo Ball.

If George remains available until 2018’s free agency period and the Lakers are able to pick him up, they’ll be right back in the thick of things in the NBA’s Western Conference. Imagine a starting lineup that features Ingram, Ball and George.

That would be tough to stop, and the Lakers would likely be able to go toe-to-toe with the Warriors in the West.