As all of basketball media has noted, the Utah Jazz are not supposed to be good. A month into the season -- their first since trading away all-star center Rudy Gobert and all-star guard Donovan Mitchell -- the Jazz are in third place in the Western Conference. Typically, when you trade away all-stars for a bevy of role players, you get worse, not better. And yet, Utah has flipped the script. First-year head coach Will Hardy has pushed the roster to push the tempo, and their ten-man rotation of cast-offs, bust-outs, and after-thoughts is exceeding all expectations.

It is very neat. Except it is almost certainly the exact opposite of what Jazz CEO Danny Ainge wants to happen. 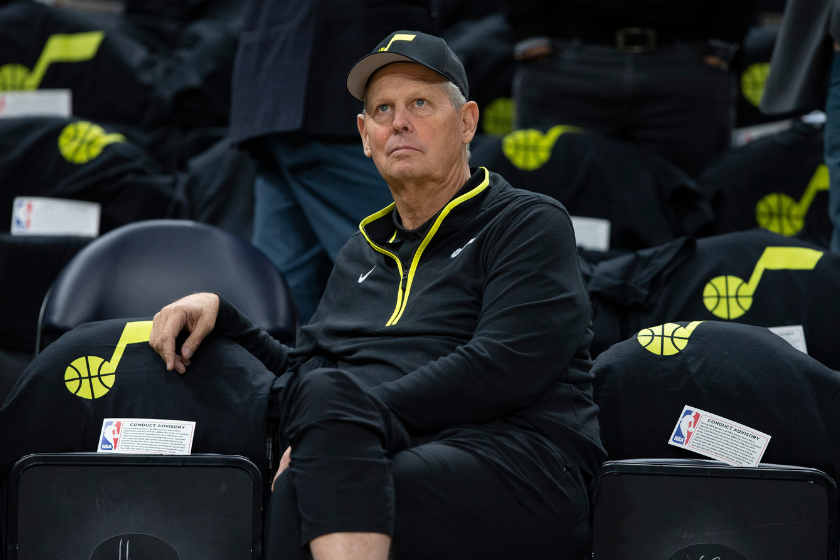 Danny Ainge famously presided over a tear down and reconstruction in the not too recent past. As head of the Boston Celtics, Ainge traded away aging superstars Kevin Garnett and Paul Pierce to the Brooklyn Nets for a package of picks that basically turned into Jaylen Brown, Jayson Tatum, and Kyrie Irving via trade (Two outta three ain't bad.) The move set Boston up for its string of success in recent years, including four Eastern Conference Finals appearances and one NBA Finals appearance since 2017.

So when Danny took over in Utah, the expectation was that he would follow a similar pattern. Trade away stars for a big rebuild. First up: Rudy Gobert. Ainge sent the "Steiffel Tower" to Minnesota for Malik Beasley, Patrick Beverley, Leandro Bolmaro, Walker Kessler, Jarred Vanderbilt and four first-round picks -- three unprotected (2023, 2025, 2027) and a top-five protected 2029 first-rounder. Then he moved Donovan Mitchell to Cleveland for Lauri Markkanen, Ochai Agbaji, Collin Sexton, three unprotected first-round picks (2025, 2027 and 2029) and two pick swaps (2026 and 2028).

So we're talking six unprotected first round picks, a couple of former lottery picks 25 and under and a couple of role players. A sizeable haul for Trader Danny.

But the most compelling part to all of this scheming was supposed to be Victor Wembanyama, the 7-foot-2 or maybe 7-foot-4, 18-year-old phenom expected to be chosen number one overall in the upcoming NBA Draft.

Listen to Giannis Antetokoumpo talk about this dude.

The full quote: "This kid is going to be a problem. A big problem. I've never seen this before in my life. I saw him up close, he was on the same team as my brother Kostas. He's taller than Rudy Gobert. He can block shots like Rudy, but shoot like KD. Bro, bro. Crazy, crazy. He has a good attitude. If he stays healthy, he's going to be really good."

Playing in the Key of WIN 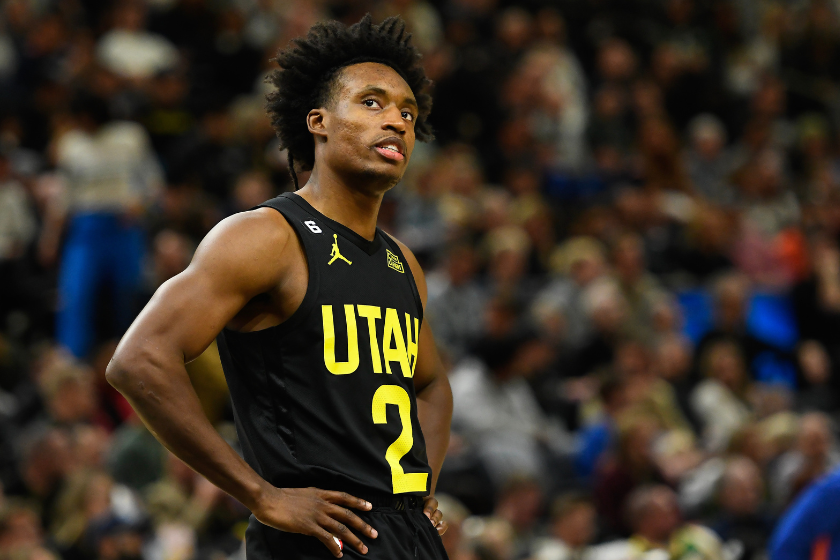 RELATED: Meet Victor Wembanyama: The 7-Foot-2 French Superstar Who's Built to Take Over the NBA

So after unloading their all-stars, it seemed like Utah would be poised to "Brick for Vic," or "Play Like Yo Mama for Wembanyama." Danny brought over a young, first time head coach -- just like he did in Boston -- and saddled him with a roster of ne'er-do wells. Everyone figures it'll be a pretty bad team and end up with a really good chance at a top draft pick. A can't lose situation.

Except, now the Jazz like...can't lose. And they're not playing a cupcake schedule, either. They've already beaten seven teams who made the playoffs last season. On Sunday it took a career effort from Joel Embiid for the Sixers to win in Philadelphia. Based on my anecdotal evidence, they are destroying money line parlays and teasers at an unparalleled rate.

So two big questions: how does Danny Ainge feel? And how do Jazz fans feel?

Ainge never publicly said the team was looking to lose as many games as possible so they could maybe get the first overall pick, because that's not a thing an NBA executive would ever say. But I mean... it sorta goes without saying. Like, if Ainge took a lie detector test asking him if he enjoyed watching Jordan Clarkson hit contested three-pointers late in close games, he's definitely going to say "yes" and he's definitely going to be caught lying.

And can you blame him? Sure, winning is cool. But know what's cooler? This:

The man is 7-foot-3. And does this. pic.twitter.com/Zcpw6zni4w

He's doing the Steph Curry look away before the shot goes down. He's 7-foot-3!

As for Jazz fans, a quick perusal of r/UtahJazz reveals the Brigham Young Utah faithful are very fired up for their team's success. They're cooking up nicknames for the Clarkson and Beasley backcourt! They're doing historical look backs on teams with similar early-season success in franchise history! They have heard your criticism of Utah's decision not to "Trust the Process" and are displeased! One commentator even goes so far as to question Big Vic's NBA future: "I'm honestly not even sold on Wembanyama. A stern look from an NBA player and he'll have a career ending injury." Bold words!

Jazz fans are in kind of a perfect place at the moment, in my opinion. Every win sticks it to the NBA literati. You get to root for a scrappy team where half the roster is going to have career best seasons. And you get a hotshot new coach!

And there are two important kickers here. If the team starts to falter, Ainge will almost definitely trade away a few pieces to other contending teams and the tank will be on. Maybe the Lauri Markannen jump is real, Mike Conley Jr. has solved aging, and Utah continues to defy expectations to win at a .600 or better pace. But there's no world where Trader Danny lets this team be .500ish.

Help From The North 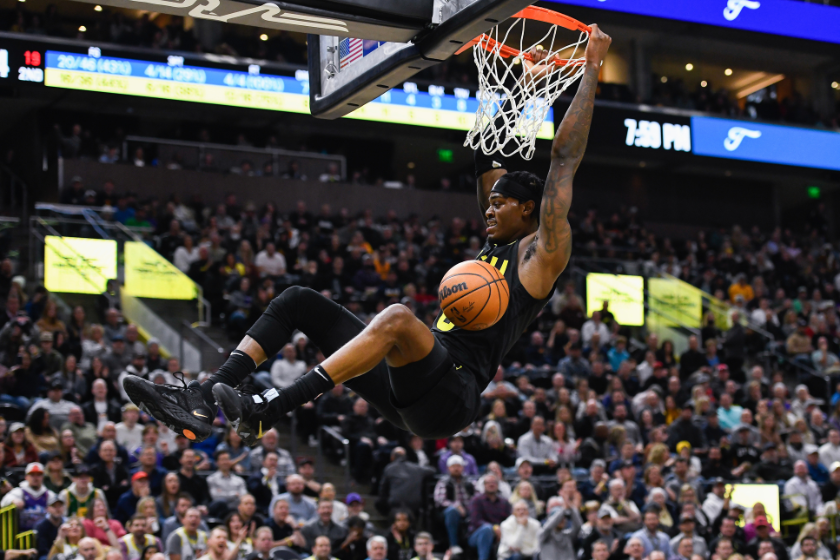 MORE: 5 NBA Storylines Fans May Have Missed From the First Month of the Season

The other piece to all this is the less than stellar start for the Minnesota Timberwolves. Recent basketball historians may recall that when Ainge dealt Pierce and Garnett to the Nets, many prognosticators believed it to be a foolish move. Surely, a re-loaded Brooklyn team would be competing for championships and deep playoff runs, and those unprotected draft picks would be late first-rounders, not lottery picks. Unfortunately for 2010s Nets fans, things did not work out that way! In fact, a subplot of Boston Celtics fandom became rooting for the Nets to continue bottoming out, since all of their draft capital would be transferred to Boston.

A decade later, could a similar pattern be unfolding with Minnesota? The T-Wolves are 6-8. That is not good! Karl Anthony Towns is calling out Anthony Edwards's eating habits in postgame press conferences. The vibes are not great.

While it's too early to throw dirt on Minnesota just yet, you can bet Jazz fans are salivating at the prospect of rooting for their own playoff team while watching the Timberwolves fall apart. For Ainge and Jazz fans alike, it would be the best version of history repeating itself.