I love the term "built in a lab" when talking about basketball players. Take a look at Kevin Durant, Giannis Antetokounmpo and LeBron James, and it's clear they were physically made to hoop.

Victor Wembanyama is the latest experiment.

The 18-year old Frenchman stands at 7-foot-2, although some say he's 7-foot-4. He has a 7-foot-9 wingspan that allows him to nearly the grab the rim without jumping. He can handle the rock. He can shoot like Dirk Nowitzki from the parking lot. He can block shots like Rudy Gobert. He can defend on the perimeter.

With a skillset that mirrors how most kids create themselves in "NBA 2K," it's no surprise he's labeled as the most "can't miss" prospect since LeBron. 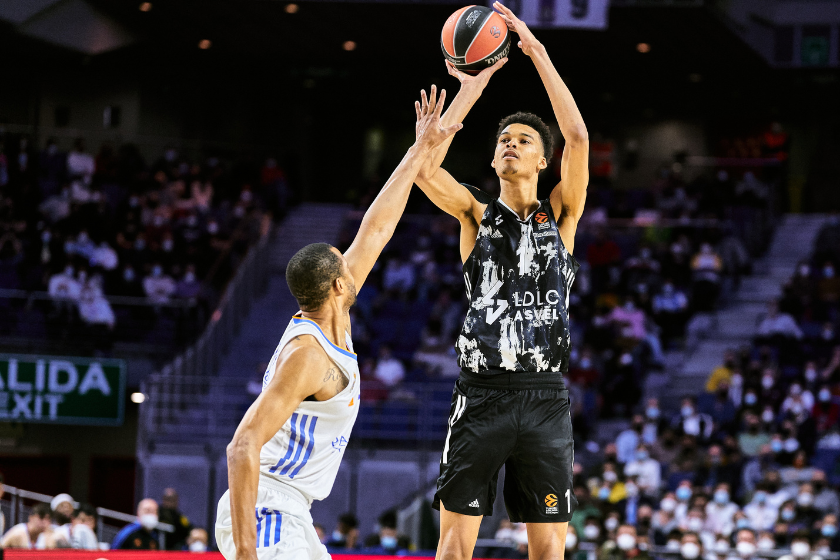 RELATED: The 12 Tallest NBA Players in History Don't Just Block Shots, They Block Out the Sun

Wembanyama, who was born on Jan. 4, 2004, in Le Chesnay, France, was destined to be an athlete. His father, Felix Wambanyama, was a track and field star who specialized in triple jump and long jump. His mother, Elodie de Fautereau, who's reportedly 6-foot-2, was a basketball star in her own right. His older sister Eve is a pro hooper as well.

As for Victor, he made his pro debut at 15 in France and has steadily blossomed into the biggest European star not named Luka Doncic. But what it is exactly that has NBA scouts so excited?

Well, Wembanyama's talent on the court is undeniable, but he's also elite when it comes to intangibles. He's coachable, confident, always pushing himself to get better and loves the pressure.

"I was built for this, I guess," Wembanyama said, according to The Associated Press. "All of what happens to me, I expected for myself. So it's just a checklist of expectations. I'm not surprised by what's happening to me. And yeah, this is happening, this is how I can manage it and I think I managed it well."

Combine everything, and there aren't many question marks. Hence why former ESPN NBA Draft expert Mike Schmitz called him "the best prospect" he's ever evaluated.

Wembanyama has performed well in his few times facing off against NBA talent, too. He put up 22 points and eight rebounds representing France in the FIBA U19 World Cup Championship against the United States, where he was primarily matched up against Chet Holmgren -- the No. 2 overall pick in the 2022 NBA Draft by the Oklahoma City Thunder. He was 17 at the time.

In a friendlier matchup, Wembanyama held his own against fellow countryman and three-time NBA Defensive Player of the Year Rudy Gobert. It's not as if Gobert was going 100 percent, but Wembanyama looked smooth and somehow made Gobert seem to be average height.

The center will get another chance to bolster his profile. His Metropolitans 92 travel to Henderson, Nevada, to play the NBA G-League Ignite in exhibition matchups tonight and Thursday, where he'll go head to head with the projected No. 2 pick in the NBA Draft, Scoot Henderson.

You could say basketball fans have been anticipating Wembanyama's debut on U.S. soil. According to The Associated Press, 200 scouts will be in attendance from every NBA team. Front office executives are expected to be there as well and will watch practices. Reporters from France, Brazil and Canada will be there, and NBA stats and WNBA players from the Las Vegas Aces are expected to make appearances, too.

If this sounds familiar, it's because we experienced it 20 years ago with LeBron James. But Wembanyama doesn't want to be compared to James, or to anyone for that matter.

"My goal," he said, "is to be like something you've never seen."