There was a man -- a very tall man -- who gained notoriety for recording NCAA Tournament games this year with a camcorder. That man was David Holmgren, father of Gonzaga Bulldogs big man Chet Holmgren.

Why does Dave continue recording his son's games with a camcorder despite high-quality videos being a click away? Old habits are hard to break. Bringing a video camera to Chet's's games is something Dave's done since he was in sixth grade. And how many games has he recorded?

"Probably thousands," Dave said, per Sports Illustrated. "I just started doing it one day and I've been doing it ever since."

I love the idea of Dave plugging in his camera to the TV, having trouble figuring out which input it goes into and the audio not working while running back the footage. It's a right of passage for dads. I further love the idea of him sitting in a NBA arena with his coveted camcorder. By his accounts, he'll do just that when Chet gets to the league.

Dave Holmgren & Sarah Harris: The Parents of the NBA's Most Unique Draft Prospect 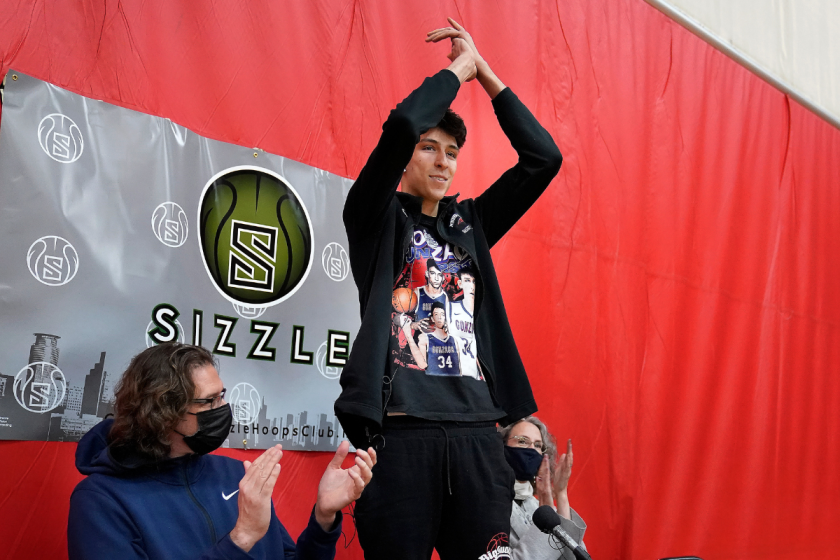 RELATED: Paolo Banchero's Parents Were Sports Stars Long Before He Was

Chet Holmgren has all the talent a basketball player could want. He measures in at 7-foot and has a 7-foot-6 wingspan - giving him all the tools of a dominant defensive player -- he can rebound, he can shoot, he can create for himself on the dribble. All these skills are what make Chet such a coveted prospect, but his weight is what most scouts hold against him. Despite his 7-foot stature, Holmgren weighs in at 195 pounds. Some say he blows over when standing in front of a fan.

Unsurprisingly, Chet gets most of his height from his dad. The elder Holmgren is a 7-footer himself and was a college basketball player at the University of Minnesota in the mid-'80s. Dave introduced his son to hoops, but he was more interested in being his biggest fan than his coach -- hence his role as Chet's cameraman. Behind the camera is where Dave likes to be. He prefers to be low-key and out of the spotlight, according to Sports Illustrated. But, that doesn't stop him from showing endless support for his son on Twitter.

Chet's mother Sarah Harris has some height, too. It's unclear exactly how tall she is, but judging off where she measures up to on Chet, my guess would be in the 6-foot-4 range. It's no wonder Chet grew into a skyscraper. Like David, Sarah likes to leave the spotlight to her son, but she did share a fun anecdote about Chet's curiosity as a baby with Sports Illustrated last March. Chet apparently figured out how to scale his crib when he was seven to nine months old, which prompted the family to put a mattress on the floor to prevent future falls and lock the door from the outside to subside his exploratory nature. Sarah currently works as the Executive Vice President of Strategy, Partnerships, and Production for Aeon in Minneapolis, per her LinkedIn.

Chet has two sisters as well. Although their names are unknown, it is known that Chet is the middle child and his siblings are also athletes. His older sister was a swimmer, but her career in the pool was unfortunately cut short due to medical issues. Meanwhile, his younger sister was a volleyball player. Shockingly, they're tall, too.

Interviews with Chet Holmgren's parents and high school coach ahead of Thursday's NBA Draft. The Minneapolis native is expected to be a top-3 pick. https://t.co/wGOf09j7rl

The Minneapolis, Minnesota product has as good a case as Auburn star Jabari Smith and Duke forward Paolo Banchero to be the number one overall pick in the 2022 NBA Draft. Chet may need to pack on some pounds, but his talent speaks for itself. He wasn't a Second-team All-American, first-team All-WCC member and the WCC Defensive Player of the Year without reason. That's not even mentioning his crazy successful high school career. The former five-star recruit was the Gatorade National Player of the Year, a McDonald's All-American, FIBA U19 World Cup MVP and a three-time state champion at Minnehaha Academy. Quite the resume.

To me, he has the highest upside of the top three prospects and is the kind of guy GMs would kick themselves for passing on. Whether the Orlando Magic take him with the top pick, where he would be reunited with high school teammate and fellow Gonzaga alum Jalen Suggs, or he goes to the Oklahoma City Thunder or Houston Rockets, the whole Holmgren family will be cheering him on.

Personally, I can't wait to see Dave and his camcorder at NBA games.