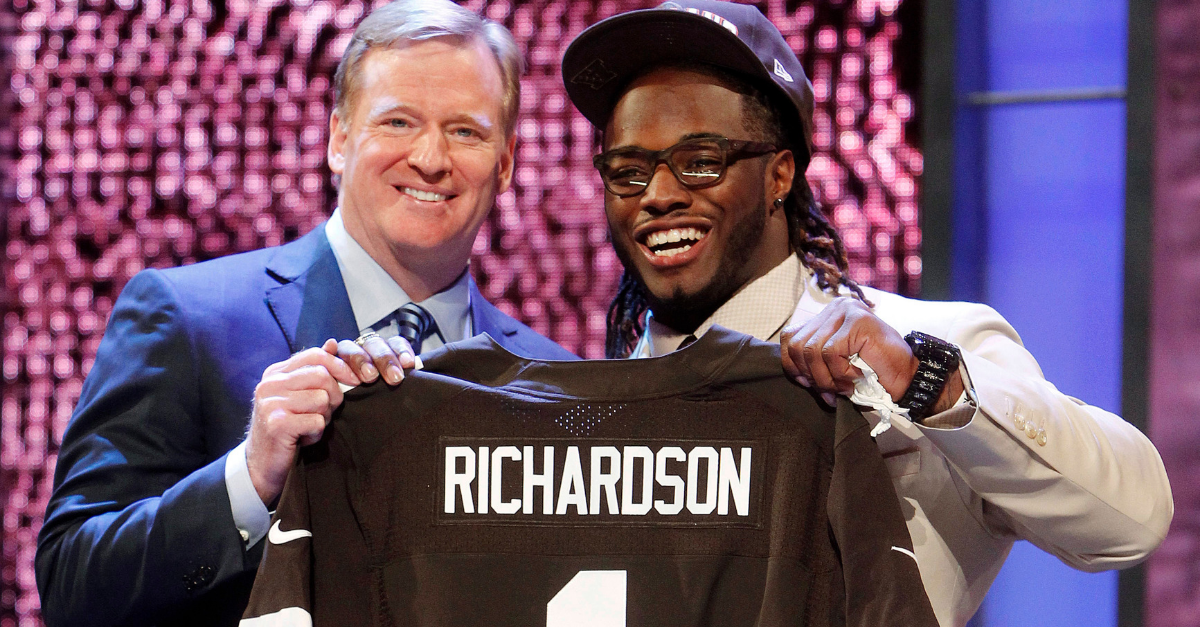 When the NFL Draft takes place, each team is planning on improving the future of its franchise, especially when picking in the top five. But that did not exactly happen in the 2012 NFL Draft.

Now that Andrew Luck has announced his retirement from the NFL, the top five players of his draft class look like the worst in the history of the National Football League.

Even though some of the players from the top of the draft had success early in their careers, they did not have the longevity of a player you would want to take so early in the first round of an NFL Draft. Of the top eight picks, just three players have gone to the Pro Bowl — they combined for six, and four of them came courtesy of Luck.

BREAKING: Andrew Luck has informed the @Colts he is retiring. (via @TomPelissero) pic.twitter.com/EUOUpKfbDQ

The Indianapolis Colts used the first overall pick to select Stanford’s Andrew Luck. This took place just after losing Peyton Manning to a neck injury, and they decided on Luck as the new franchise quarterback. With Luck retiring after just six seasons (he missed all of 2017 with injury), that leaves the most successful quarterback of this class as Russell Wilson, who fell to the Seattle Seahawks in the third round.

Luck was seen as one of the best quarterback prospects of the last few decades, but due to lackluster management protecting him, he was injured way too often and decided to walk away before he suffered even more serious injuries.

After Luck, the Washington Redskins chose the 2011 Heisman Trophy winner, Robert Griffin III from Baylor. RGIII was a great NFL quarterback when he took the field his first season, but like Luck, injuries derailed his once-promising career.

As a rookie, Griffin was selected as a Pro Bowler and led the Redskins to the playoffs, but injuries led to him sitting out the 2015 season and signing with the Cleveland Browns in 2016. After being the second-overall selection and having a historic rookie season, he was never the same. He is now the primary backup to Lamar Jackson with the Baltimore Ravens.

The Browns thought they were getting a great running back when they drafted Trent Richardson with the third-overall pick from Alabama. Though he was nothing short of dominant in 2011 with the Crimson Tide, Richardson never lived up to expectations with just 2,032 yards in three seasons. He was traded to the Colts midway through the 2013 season and last played back in 2014.

Richardson briefly played for the AAF’s Birmingham Iron in 2019, but still doesn’t have a job in the NFL.

#Texans release LT Matt Kalil. He was made expendable after team traded draft capital to #Dolphins for LT Laremy Tunsil. After 2012 his rookie season, Kalil never cracked another Pro Bowl and has been bounced around a couple teams in the process going from #Vikings to #Panthers

The Minnesota Vikings took the first offensive lineman of the draft with Matt Kalil as the fourth pick. As an offensive tackle out of USC, Kalil was the only offensive lineman taken in the top-20 of the 2012 draft. He did make a Pro Bowl as a rookie for the Vikings, then signed a five-year deal in 2016 with the Carolina Panthers, but was released after missing all of 2018 with knee issues.

The next offensive lineman wasn’t taken until 23rd overall, Riley Reiff from Iowa by the Detroit Lions. The Pittsburgh Steelers selected David DeCastro, a guard out of Stanford, with the next pick.

A name forgotten by most, who's still indefinitely suspended by the #NFL, WR Justin Blackmon.

He hasn't played since the 2013 season and the #Jaguars still hold his rights.

Oklahoma State wide receiver Justin Blackmon was taken with the fifth pick by the Jacksonville Jaguars. In his final two seasons with the Cowboys, he had 233 catches for 3,304 yards and 38 touchdowns. He looked like a dominant receiver at the next level, but that never happened.

He played in just 20 games for the Jaguars, catching 93 passes for 1,280 yards and six touchdowns. He may have had a good career in the NFL if not for his suspensions for violating the NFL’s substance abuse policy.

Even though all five of the top picks never panned out, they weren’t the only first-rounders from 2012 that failed to live up to the hype.

The next two picks were Morris Claiborne from LSU and Mark Barron from Alabama, both defensive backs with extremely high expectations. Claiborne played five seasons as a Dallas Cowboy, but never lived up to the lock-down cornerback he was thought to be. Barron played three seasons for the Tampa Bay Buccaneers before being traded to the St. Louis Rams. The Bucs also took Doug Martin with a first-round draft pick at 31st overall. Martin spent six seasons in Tampa before joining the Oakland Raiders.

In addition, Ryan Tannehill was the third quarterback taken in the draft at No. 8 and has played the most games of the four QBs taken in the first round. After starring at Texas A&M, Tannehill spent the fair share of his career on the injury report for the Miami Dolphins before being traded to the Tennessee Titans.

The most successful player from the 2012 NFL Draft was taken with the ninth-overall pick by the Carolina Panthers. Boston College linebacker Luke Kuechly has been one of the best defender in the league with six Pro Bowl appearances as of 2018, the most of any player. Bobby Wagner and Russell Wilson each have five Pro Bowl selections as the second and third round picks, respectively, of the Seahawks.

The Buffalo Bills made a nice selection to finish out the top 10 when the picked Stephon Gilmore from South Carolina. He was one of the top corners in the AFC during his time in Buffalo, earning a Pro Bowl selection in 2016, his last season with the Bills. He signed with the New England Patriots in 2017 and was First-Team All-Pro as a big part of the team’s Super Bowl LIII win.

The 11th and 12th picks were good ones along the defensive line with Memphis’ Dontari Poe going to the Kansas City Chiefs and Mississippi State’s Fletcher Cox going to the Philadelphia Eagles.

ICYMI: Fletcher Cox agreed to terms on a six-year contract worth $103 million with $63 million in guaranteed money. https://t.co/PMEhn1JlvE

The San Diego Chargers picked a good pass-rusher from South Carolina with Melvin Ingram, who is still playing for the team and has made two Pro Bowls.

The Patriots had a pretty good first round by taking Chandler Jones (21st) and Dont’a Hightower (25th). The Bengals, Buccaneers, Browns, and Vikings each draft twice in the first round. Minnesota is the only other team that had both first round picks selected to play in the Pro Bowl with Kalil and safety Harrison Smith.

That quarterback class from the 2012 #NFL Draft. Something: Andrew Luck, RGIII, Brandon Weeden taken 53 picks ahead of Russell Wilson. Brock Osweiler in there. Nick Foles, too. Just insanity. pic.twitter.com/7xU6fsNQ6T

Though Luck was probably the most talented in the draft class, Wilson out of Wisconsin has been the most successful due to Luck’s bad luck with injuries. But the class, as a whole, was pretty rough.

Luck, Griffin, and Tannehill were taken in the top-10 while Brandon Weeden from Oklahoma State rounded out the first-round for quarterbacks. Weeden was 29 years old during his rookie season for the Cleveland Browns and hasn’t started an NFL game since 2015.

Of the 11 quarterbacks drafted in 2012, the ones drafted in the third and fourth rounds made more Pro Bowls than QBs in the first two rounds. Russell accounted for five while Nick Foles (88th overall) and Kirk Cousins (102nd overall) each made one. When Griffin was injured early in his career, it was Cousins who took advantage since the Redskins took two quarterbacks in the first four rounds.

Brock Osweiler, picked in the second round by Denver, was the fifth quarterback taken and had some big moments in the Broncos’ run towards the Super Bowl in 2015 while filling in for Peyton Manning.

Receivers taken in the first 2 rounds of the 2012 NFL Draft:

Outside of T.Y. Hilton and arguably Alshon Jeffery the whole class=#Yikes pic.twitter.com/eVVt01tCwf

Although the quarterbacks in this draft class were extremely disappointing, the receivers were pretty close behind them. Blackmon was the first taken and was a huge let down. Floyd looked to be a great compliment to Larry Fitzgerald in Arizona before an arrest saw his career come to a quick end.

The Tennessee Titans took Kendall Wright with the 20th pick, but he was never a number-one receiver. The San Francisco 49ers took A.J. Jenkins at 30th overall, but he only caught 17 passes in his short career.

The seventh receiver taken in the draft is the earliest taken to make a Pro Bowl. The Chicago Bears picked Alshon Jeffery with the 45th pick. The only other receiver to make it to the Pro Bowl was T.Y. Hilton, who was selected with the 92nd pick by the Colts.

READ MORE: The 2013 NFL Draft Was Even Worse Than I Remember