Since tearing up the gridiron at Minnesota State and going undrafted out of college, the 30-year-old wideout has blossomed into one of the best at his position in all of the NFL. In fact, his 14 touchdowns in 2020 were third only to Davante Adams and Tyreek Hill. And let's face it, he doesn't have the same caliber of quarterback those guys do.

Minnesota fans have fallen in love with Adam's hands, but who is the woman he fell in love with? Meet Adam's wife, Caitlin Thielen. She's a successful lifestyle blogger while raising two boys, running a foundation with her husband and navigating the busy schedule of an NFL sensation. 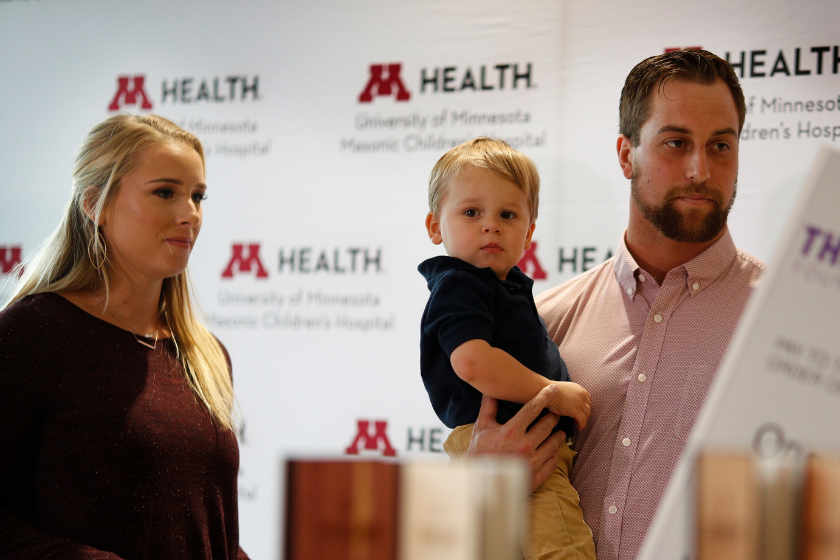 RELATED: Kirk Cousins Married a School Teacher and Had 2 Kids

Caitlin Thielen was born Caitlin Graboski in Appleton, Wisconsin. The daughter of Jim and Brenda Graboski, Caitlin took after her two older brothers Brent and Ryan. She followed them to the athletic fields and found her groove on the soccer pitch.

The Graboskis moved to Woodbury, Minnesota when Caitlin was still in elementary school. At Woodbury High School, Caitlin excelled academically and athletically. After leading her school to an undefeated state title-winning season and winning the St. Paul Pioneer Press Girls Soccer Player of the Year Award, Caitlin accepted a full-ride scholarship to Iowa State University.

Caitlin played two years with the Iowa State Cyclones before entering the transfer portal. (Note: the transfer portal, as cool as it sounds, is not a real, physical portal that players step through. I wish it were, though.) She followed old teammates to Minnesota State University, Mankato, and played one season for the Minnesota State Mavericks before succumbing to ACL injury. By then, she'd already met her future husband.

Adam Thielen and Caitlin Graboski were introduced through a mutual friend while Caitlin attended Iowa State. They exchanged messages through Facebook at first, but Thielen eventually got the digits. They had been chatting for months before Caitlin transferred to Minnesota State (for soccer, not love).

When they finally met in person, Caitlin was unimpressed. Adam, as in his professional football career, remained persistent. He eventually earned a starting role in Caitlin's heart. Their love story is recorded in Caitlin's lifestyle blog, which she still maintains today.

Life with Mrs. T is Caitlin's foray into the world of blogging. Caitlin changed her last name to Thielen in May 2015 and is the mother of two sons: Asher John Thielen and Hudson James Thielen. Her blog discusses the parenting challenges in the twenty-first century as a young Christian with a famous husband and two rambunctious sons. There's also a recipe for apple cinnamon-baked oatmeal.

Mrs. T has a degree in communications disorders and speech pathology. Caitlin and Adam's work through the Thielen Foundation has raised money for children's hospitals in Minnesota. She serves as the foundation's vice president.

With her athletic days in the past and family days ahead, the former soccer star has fully transitioned to the stay-at-home-mommy-blogger role. Her social media accounts are active but mostly filled with cute toddler pics and the Thielen family. She also has more than 24,000 followers on Twitter.

Team Thielen has been unstoppable since 2015. As their sons grow, so does Adam's NFL base salary and net worth. That's a winning formula for any NFL family. 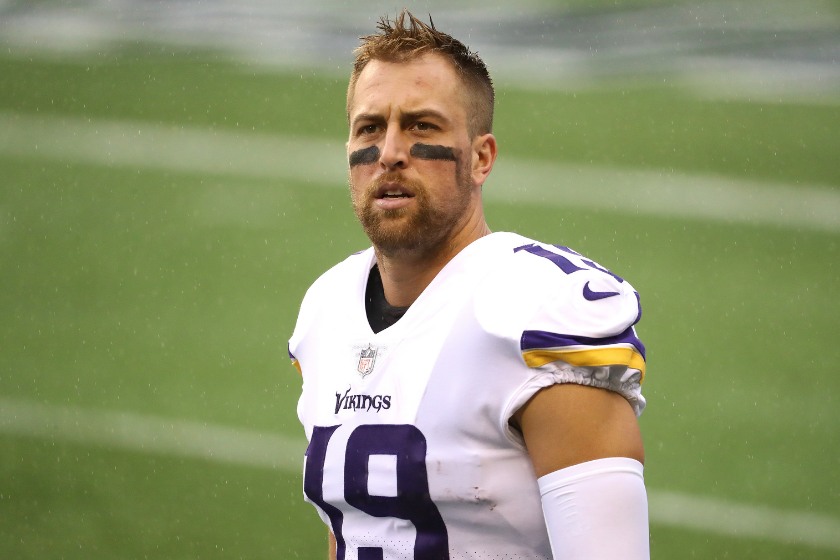 Adam John Thielen is a professional American football player, husband and father of two. The NFL player starts at wide receiver for the Minnesota Vikings, his hometown team. Undrafted out of a D-II Minnesota school, the Vikings wideout currently holds two NFL records.

Thielen redshirted for the Minnesota Mavericks his freshman year. For the rest of his tenure, the Mavs went 38-11. Thielen set several MSU records and led the Mavericks to a Mineral Water Bowl victory over Northeastern State in 2011. He left Mankato after the 2012 season with his name plastered all over the school's record books. Still, Thielen wasn't invited to the NFL Draft Combine in 2013, leaving his future in the National Football League up to doubt.

Thielen got his shot at a professional career with the Vikings practice squad as an undrafted free agent and made the practice squad in 2013. By 2014, Thielen saw more playing time and a more lucrative contract. In 2017, Theilen singed his first multi-year deal with the Vikings, that included a $4 million signing bonus.

The Vikings took a smart chance on Adam Thielen. Vikings fans like Cris Carter have raved about the wideout's productivity since 2015, with Theilen snagging 3.9 receptions per game over his career. The undrafted superstar has been to two Pro Bowls and named one second-team All-Pro. Thielen is the NFL record-holder for most consecutive games with 100+ receiving yards to begin a season with (8) and most consecutive games with 100+ receiving yards (also 8). He shares the latter record with former Detroit Lions legend Calvin Johnson. Anytime you share a record with Megatron, you've got to be pretty good.

Since Thielen became a regular starter in 2016, the Vikes have made two playoff appearances. They lost the NFC Conference Championship to the Philadelphia Eagles in 2017 and in the first round to the San Francisco 49ers in 2019. Thielen didn't score a touchdown in either loss.

Thielen is still searching for his first Super Bowl hardware, but he's already found another ring that means much more to him.

This article was originally published on June 22, 2021, and has been updated since.